Back to Godhead > Krishna > Lord Caitanya > Saviors of the Most Fallen

Saviors of the Most Fallen

Saviors of the Most Fallen

More merciful than the most merciful Lord Caitanya
is Nityananda Prabhu. Together, He and Lord Caitanya offer
the simplest and most sublime method of self-realization. 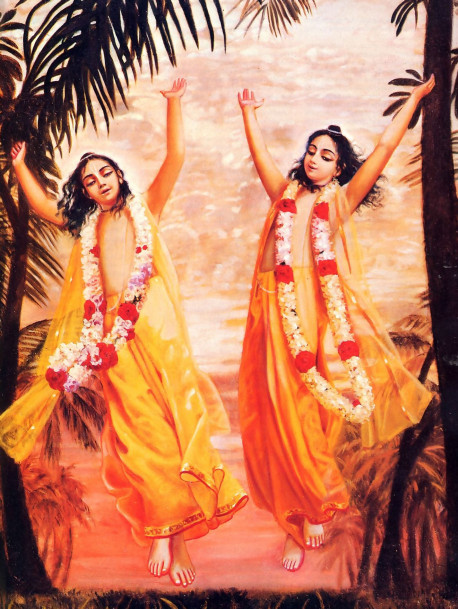 “Lord Caitanya and Lord Nityananda are like the sun and the moon. They have arisen simultaneously on the horizon of Gauda to dissipate the darkness of ignorance and thus wonderfully bestow benediction upon all.”

Continuing a special series of articles commemorating the five-hundredth anniversary of Lord Caitanya’s appearance in Mayapur, West Bengal. By His life and teachings. He inaugurated the Hare Krsna movement.

Throughout the world, members of the International Society for Krishna Consciousness worship Lord Caitanya along with His principal associate, Nityananda Prabhu. The altar of every ISKCON temple is graced either by a worshipable painting or by lovingly dressed and cared-for icons (known in Sanskrit as murtis) of Nityananda Prabhu (Nitai) and Lord Caitanya (Gaura). And in virtually every kirtana, ISKCON devotees raise their voices in the jubilant chant “Nitai Gaura Hari-bol!”

Just as Lord Caitanya is Krsna Himself, so Nityananda is Balarama. Srila Prabhupada explains, “There is no difference between the spiritual positions of Lord Caitanya and Nityananda Prabhu, or Krsna and Balarama. All of Them are but different manifestations of the Supreme Personality of Godhead.” This Vedic truth is illustrated in the following pastime from the Sri Caitanya-caritamrta:

One day Lord Caitanya Mahaprabhu exhibited to Lord Nityananda Prabhu a six-armed form bearing a conchshell, disc, club, lotus flower, bow, and flute.
Thereafter the Lord showed Him His four-armed form, standing in a three-curved posture. With two hands He played upon a flute, and in the other two He carried a conchshell and disc.

And as They are one, so Their mission is also one. Following Lord Caitanya, Nityananda Prabhu also popularized the public chanting of the holy names—through His many disciples and personally, by His preaching door to door and by His ecstatic manner of chanting and dancing in divine love. In fact, Nityananda Prabhu is sometimes said to be more merciful than the most merciful Lord Caitanya Himself. This is not a contradiction but is simply one aspect of the personality of the manifestation of God who is variously described as the most merciful, the most unconventional, and the funniest. Indeed, Caitanya-caritamrta states that Nityananda Prabhu is “very merciful and very funny.”

One pastime—the deliverance of Jagai and Madhai—acquaints us well with the mercy of Nityananda. One day Nityananda Prabhu was walking down a main road of Navadvipa when He came upon a roaring crowd. Upon inquiring. He learned that two drunken brothers, former brahmanas now fallen into debauchery, were making fools of themselves before everyone and creating a disturbance. Nityananda Prabhu concluded that these degraded brothers were ideal recipients of Lord Caitanya’s mercy. If these two were to be delivered, He reasoned, then that would glorify Lord Caitanya as the deliverer of the most fallen. With this in mind. He began to push His way through the crowd toward the two brothers.

Emerging into an opening in the center of the crowd, Nityananda approached the rowdy pair, humbly asking them to chant the holy name of Lord Krsna. This enraged the two brothers, however, who began to swear at Nityananda Prabhu and chase Him. Of course, no one can defame or harm Nityananda Prabhu, as He is the Supreme Personality of Godhead, but such is His transcendental pastime as a humble yet bold preacher of Krsna consciousness. When Lord Caitanya learned later that day that Nityananda Prabhu had attempted to deliver such fallen persons, He was very happy. 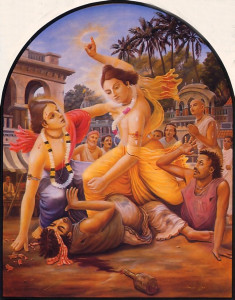 Seeing Lord Caitanya flushed with anger, His disc weapon raised above His head, Lord Nityananda intervened and begged Him not to kill the two debauched brothers.

The next day, Nityananda Prabhu went to see the two brothers, but as soon as He approached them, Madhai threw a piece of earthen pot at Him, striking Him on the forehead and causing blood to flow from His transcendental body. This, of course, was a great offense, yet Nityananda Prabhu, out of His great compassion for these doomed souls, forgave them and again humbly requested them to chant Hare Krsna.

Srila Prabhupada writes in this connection, “This is the specific kindness of Lord Caitanya. In this age no one can say that he is free from sin. It is impossible for anyone to say this. But Lord Caitanya accepts all kinds of sinful persons on the one condition that they promise not to indulge in sinful habits after being spiritually initiated by the bona fide spiritual master.”

This pastime of Lord Caitanya and Nityananda Prabhu demonstrates the especially merciful combination of these two divine personalities, appearing together to deliver the most fallen souls. The sankirtana movement of chanting the holy names of Krsna is Their movement. They began it, and They continue it. Our great fortune is that we are being given the opportunity to participate in it.

(1) Lord Caitanya and Lord Nityananda are the most merciful and munificent manifestations of Godhead. They appear in the most godless age to deliver the most sinful persons. They offer the highest of all spiritual perfections: pure love of God. They teach the simplest and most sublime of all spiritual practices: the chanting of Hare Krsna, Hare Krsna, Krsna Krsna, Hare Hare/ Hare Rama, Hare Rama, Rama Rama, Hare Hare.

(2) By Their inconceivable (yet perceivable) presence within Their many Deity forms in temples around the world. Lord Caitanya and Nityananda Prabhu accept the sincere service of the thousands of converted “Jagais and Madhais” who, like their prototypes, have received the forgiveness and the mercy of Gaura-Nitai and have given up all sinfulness.

(3) By Their presence within ISKCON temples, within the devotional chanting of ISKCON devotees, and within the hearts of the devotees. Lord Caitanya and Nityananda Prabhu continue to bless the fallen souls of this age. Thus They direct Their own spiritual movement.

How easy it should be for us to appreciate the wisdom, the compassion, and the munificence of Lord Caitanya and Nityananda Prabhu. By Their desire and by the subsequent desire of Their servants, transcendental mercy is spreading everywhere. As the Caitanya-caritamrta states, “I offer my respectful obeisances unto Lord Caitanya and Lord Nityananda, who are like the sun and moon. They have arisen simultaneously on the horizon of Gauda to dissipate the darkness of ignorance and thus wonderfully bestow benediction upon all.”

So, like the sun and moon together. Lord Caitanya and Nityananda Prabhu have appeared to brighten our lives and dissipate our ignorance. If you want to avoid Them, you’ll just have to close your eyes.