Back to Godhead > ~Featured~ > Festivals of India Come West

The Hare Krsna movement expands its presentation of
India’s spiritual culture with a traveling festival. 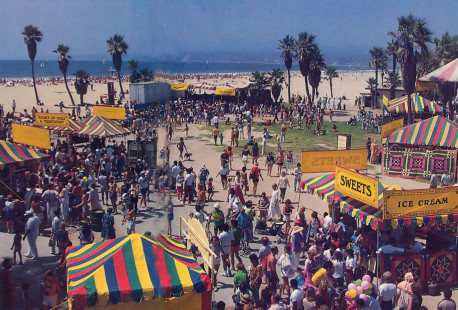 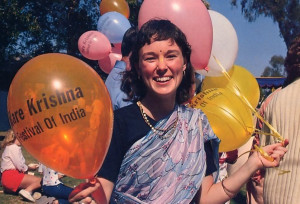 College Avenue curves uphill and past the modern campus of San Diego State University. It is spring, shortly after midnight in midweek, and the avenue is nearly deserted. Laughter and loud music drift from nearby dormitory parties. Fifty yards from the avenue, with the party ruckus out of earshot, the main campus quadrangle is silent. 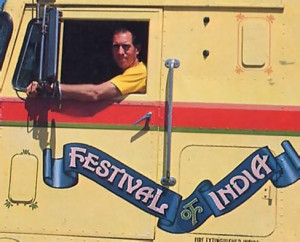 Crisscrossing North America in the Festival’s tractor-trailer, Madhuha dasa transports exhibits such as “Origins”, which illustrates the many faults in modern scientific theories

Silent, that is, except for a soft, hollow rattle . . . clang . . . clang. From a bright yellow tractor-trailer parked on the quadrangle corner near the student center, a crew of Hare Krsna devotees unloads eight-foot aluminum tent-poles in the semi-darkness, spreading them in rectangular, dominolike patterns on the brick-and-cement sidewalk. Over the next five hours the devotees will assemble ten brightly colored tents topped by three-foot-high yellow banners reading “The Science of Reincarnation,” “Transcendental Art,” “The Search for the Kingdom of God,” and soon. 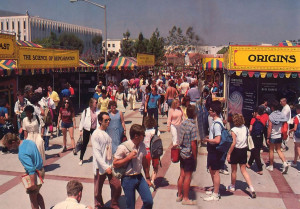 The devotees have to work at night because the locations, usually parks or college campuses, are too crowded during the day. “The students saw nothing here a few hours ago,” crew leader Madhuha dasa explains, setting down an armload of poles, “but tomorrow morning . . . there’s definitely a surprise factor.”

Madhuha is one of the creators and directors of the traveling Festival of India, which he and other devotees began in 1979 with funds supplied by the Bhaktivedanta Book Trust (BBT), the publishing arm of the Hare Krsna movement. A presentation of some important aspects of India’s ancient Vedic culture, the festival shows how Vedic concepts and the Vedic lifestyle are, ever relevant in guiding human society and in fulfilling man’s quest for timeless knowledge. The festival is always “a surprise,” both visually and culturally, although the devotees arrange for the sites weeks and even months in advance and advertise energetically. 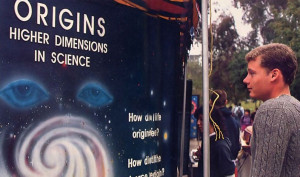 One of the festival exhibits. Origins: Higher Dimensions in Science, confronts the questions “How did life originate?” and “Life from chemicals: fact or fantasy?” Strolling into the Origins tent, a festival-goer reads the following on a row of laminated panels amid photos and illustrations: “A fundamental tenet of modern science is that everything that exists can be broken down into simple mathematical expressions and explained by the laws of physics. But consciousness—complete with memories, feelings, perception, desires, and sense of selfhood—eludes such descriptions.” 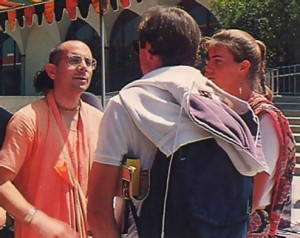 Festival coordinator Srila Ramesvara Swami, one of the present spiritual masters in the Hare Krsna movement, answers questions from festival visitors with insights from the Krsna consciousness philosophy

The festival exhibits are based on books published by the BBT. Consisting of commentary and translations of the Vedic literatures, the books of His Divine Grace A.C. Bhaktivedanta Swami Prabhupada (founder and spiritual master of the Hare Krsna movement) explain that life and consciousness are not products of chemical evolution but rather symptoms of the eternal soul situated in the bodies of all living entities. The eternal soul animates the temporary body. Chemicals alone are always lifeless. 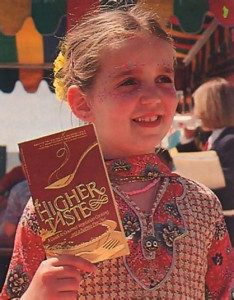 That we are not our bodies but eternal souls is the first principle of spiritual knowledge. Enunciated in the Bhagavad-gita and other Vedic texts, this principle has been taught by followers of Srila Prabhupada for nearly twenty years, primarily through book distribution. The Origins exhibit at the Festival of India spells out the we-are-not-the-body principle by exposing the faults in popular scientific theories such as the “life from chemicals” theory, the “big bang” theory, the evolutionary theory, and so on. The exhibit quotes, among others, Albert Einstein and T. H. Huxley and concludes with the Vedic explanations of life and consciousness. 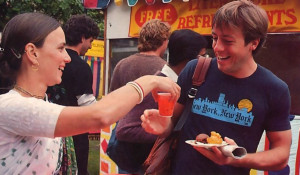 Visitors sample the recipes for themselves at the refreshment booth.

By 6 a.m. Madhuha and his crew have finished assembling the tents, and most of the laminated exhibit panels are in place. An early-rising SDSU student is already examining the paintings in the Transcendental Art tent—colorful pictures of many of Krsna’s incarnations, of Krsna speaking the Bhagavad-gita on the Battlefield of Kuruksetra, and of such unusual scenes as an emaciated mystic yogi meditating high in the Himalayas. 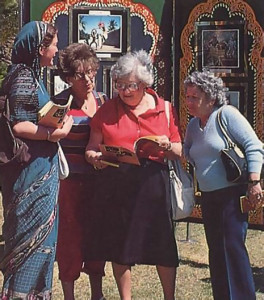 A devotee hands out literature to the curious.

Based on Srila Prabhupada’s writings, the festival exhibits are like giant walk through books. Hare Krsna devotees are internationally known for distributing their literature in airports and other public places, but people sometimes don’t understand that devotees are primarily out to disseminate transcendental knowledge, not collect money. In some African, Asian, and Eastern Bloc countries devotees distribute the books far below cost, or even pass them out free, depending on the people’s economic conditions. In the United States and other countries, on the other hand, books are sold at cost or slightly above. Devotees know that if you hand a free book to a relatively wealthy Westerner, it’s likely to soon find its way into a wastebasket. 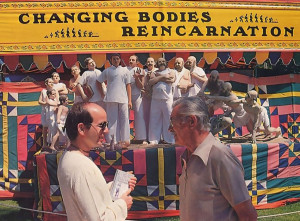 While the body changes from youth to old age, the Bhagavad-gita explains, the self remains the same. With the festival’s “Changing Bodies” exhibit as a backdrop, young and old discuss the science of reincarnation

“Book distribution” is therefore not a euphemism but a proper label for the practical method devotees use to accomplish the task of distributing Vedic knowledge. By investing hundreds of thousands of dollars in the Festival of India program, the Hare Krsna devotees have further committed themselves to their number-one task. There is no admission charge for the festival, and the “books” are tastefully presented with numerous photographs and illustrations. Visitors stroll through the tents at their own pace and enjoy the vegetarian refreshments provided by devotees. 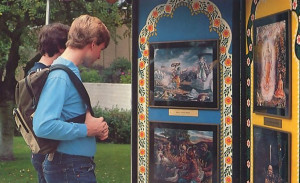 Coincidentally, when Indira Gandhi visited the United States in 1982, the cultural exchange she and President Reagan agreed to initiate between their countries was also given the name “Festival of India.” This year, under the U.S.-India program, many Indian dance and theater troupes will perform in the United States, and American galleries and museums will display Indian exhibits. Though the two festivals of India are not yet officially related, they cover some of the same ground, the devotees emphasizing more the universal features of spiritual Vedic philosophy and culture and how they apply to Western lifestyles and thought. 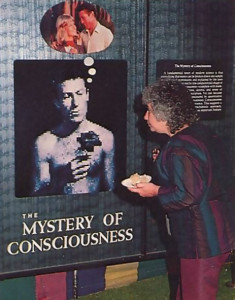 A visitor explores “The Mystery of Consciousness” while savoring the mysteriously good tastes of the festival refreshments.

Srila Prabhupada said many times that a combination of Western technology and Vedic culture could revitalize the war-torn, spiritually impoverished modern world. If a blind man takes a lame man on his shoulders, he said, together they make a perfect team. The Western countries are spiritually blind, unaware of the non-sectarian Vedic science of self-realization, while India is technologically lame. Cooperation between the two could spark a cultural revolution. It was Srila Prabhupada’s intention to inaugurate such a joyous revolution. In 1965, in the Preface to his Srimad-Bhagavatam translation and commentary, he wrote, “There is need of a clue as to how humanity can become one in peace, ‘ friendship, and prosperity with a common cause. Srimad-Bhagavatam will fill this need, for it is a cultural presentation for the respiritualization of the entire human society.”

Carrying on the Bhagavatam tradition, the Festival of India, which in the past five years has crisscrossed America and Canada aboard its yellow tractor-trailer, sheds spiritual light on the controversial issues of the day and clarifies some Vedic concepts now popular in the West, such as karma and reincarnation. 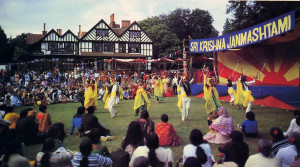 In addition to the traveling festival, the temples of the International Society for Krishna Consciousness sponsor such traditional cultural events as Janmastami, the annual celebration of Lord Krsna’s appearance-day anniversary, shown above at Bhaktivedanta Manor, where thousands of Londoners watch a performance by an Indian dance company. The festival culminates in a midnight worship ceremony and a feast of prasadam, vegetarian food offered to Lord Krsna.

At eight-thirty Madhuha leaves the completed festival sight to get some much-needed rest, while other devotees arrive to set up book tables and stock the food booth with freshly cooked snacks. By late morning students fill the quadrangle, running to classes, sunning themselves on the steps of the student center, and browsing through the festival tents. Two girls, backpacks over their shoulders, have rolled their bikes into the Reincarnation tent and stand reading:

“Most of us seldom if ever think about death or what happens afterward. Some say that death is the end of everything. Others hold that this life is only one of many we have lived and will live in the future. In fact, more than one-third of the world’s population—about 1.5 billion people—accept reincarnation as a fact.” 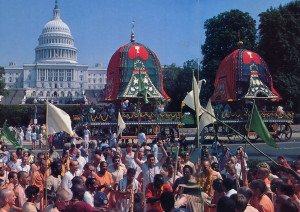 The ancient Festival of the Chariots, known in India as Ratha-yatra, brightens the U.S. Capitol

Further on, the girls scan quotes beneath the pictures of Nils Bohr, Socrates, Benjamin Franklin, and others, reading how each of these famous personalities believed in the possibility of a next life. Then the coeds pull their bikes to the end of the exhibit to see what the Bhagavad-gita has to say on the matter. Students are also inspecting the other exhibits, talking with the devotees, taking the free books, and sampling the vegetarian snacks. 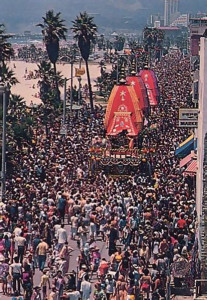 The theme of East-West collaboration is evident in every detail of the Festival of India program, right down to the festival tents. “When we were getting started in 1979,” says Madhuha, “we used tent material imported from India—the traditional multicolored cloth—and bamboo poles. It was all very authentic-looking, but we ran into problems. We couldn’t set up on paved areas because the stakes holding the tent ropes had to be driven into the ground. That limited our choice of locations, and the tents put a lot of wear and tear on our hosts’ lawns.” 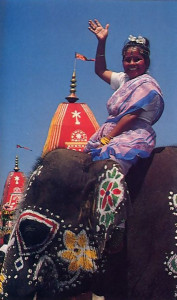 A joyous celebrant surveys the festival scene from a painted mascot.

The Indian-made tent cloth, though dazzling, also had drawbacks—it was neither water- nor fireproof. A shower could turn the festival into a sodden mess, and while he was setting up at one college campus, Madhuha recalls with a laugh, the automatic sprinkler system came on at 4 a.m., soaking the tents before the devotees could find the turn-off valve. As for fire hazards, just before an important engagement in Los Angeles a fire marshal showed up at the site, pulled a few fibers from one of the tents, tested them with his butane lighter, and called off the festival.

The devotees consulted with an American tent manufacturer and found solutions to their problems. The present aluminum tent frames stand firmly without rope supports, and the U.S.-made tent material, still brightly colored, is both fire- and waterproof. Perhaps what all this proves, at least microscopically, is that modern American technology is perfectly compatible with and even highly complementary to the ancient Vedic spiritual knowledge and culture. The blind man and the lame man have joined forces!

At 5 p.m. Madhuha returns to the quadrangle with his crew and begins to disassemble the exhibits and tents, loading them carefully into their assigned compartments in the yellow tractor-trailer. Devotees and students linger at the food booth and book table, talking and eating, as the multicolored tents gradually disappear. Madhuha and his crew have two days off before the festival in San Diego’s Balboa Park on Sunday, then a day to drive the exhibits up to Laguna Beach. Later, there will be festivals in San Francisco and Seattle, and by late summer they will have crossed the country and moved halfway down the East Coast. 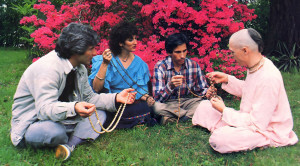 And what a versatile meditation it is! You can practice alone or with others—anywhere, anytime.

Says Srila Prabhupada, who introduced the chanting throughout the world, “The transcendental vibration established by the chanting of Hare Krsna is the sublime method for reviving our original, pure consciousness. … By chanting this transcendental vibration, we can cleanse all misgivings from our hearts and feel ecstasy coming through from the spiritual stratum. . . . This chanting of Hare Krsna is enacted from the spiritual platform, and thus this sound vibration surpasses all lower strata of consciousness.”