Back to Godhead > Devotees > The Platform of Real Bliss

The Platform of Real Bliss

Krsna is the all-blissful Supreme Personality of Godhead, and we are all constitutionally His eternally blissful servitors. Unfortunately we have forgotten this fact, and thus we have fallen into material consciousness. 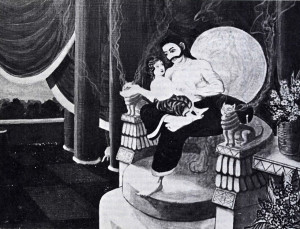 Prahlada Maharaja said to his father, “My dear father, I think you do not know what the success of life really is.” People do not know how to be actually successful in life. Everyone is interested in his own personal enjoyment, but no one really knows where real pleasure is available. Everyone is supposed to be concerned with his own self-interest, but no one knows what his self-interest actually is.

Prahlada’s father, Hiranyakasipu, was a greatly powerful atheist king, and he perfectly displayed the character of materialistic, or “demoniac,” consciousness. All of his energy was devoted to obtaining increased bodily pleasure. And, of course, he was hoping that his five-year-old son Prahlada would follow in his footsteps. But Prahlada was not interested in material affairs. When his father inquired from him what was the best thing that he had learned from his teachers, Prahlada replied that he had not learned anything of any value from them. By the grace of the great sage Narada Muni, Prahlada had obtained the rare opportunity for developing Krsna consciousness, and he was therefore completely disinterested in material happiness. Instead of working very hard in school, Prahlada was chanting Hare Krsna and dancing, and, to the dismay of the teachers, all the other young children joined with him. 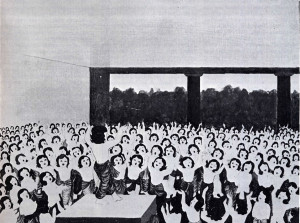 In the material conception of life, we are engaged in trying to get pleasure from dead objects through our temporary and limited senses, and thus we obtain only flickering happiness. We are dependent on material conditions for our happiness, and thus it is inevitable that we are always hankering to have something or lamenting because we have lost something. We see a beautiful girl or boy and our mind becomes dominated by strong hankering, or we lose our girl friend or boy friend, and lamentation is the immediate result. Despite such circumstances we are thinking that we have control over events in this world, not realizing that we are actually under the control of our senses. The fact that we do not recognize that we are controlled is an indication of the extent to which our originally pure consciousness is contaminated by the material atmosphere.

Under the control of the illusory energy, we are thinking that we are enjoying great sense pleasure, but we do not know that this is not real pleasure. The materialistic person is under the false conception that there is no difference between his body and his self. He is thinking himself identical with his body, and therefore he is fully engaging himself in trying to satisfy his bodily desires by the four activities of eating, sleeping, mating and defending.

The lower animals are guided by this conception, and they engage themselves in these activities without any knowledge of higher spiritual principles. But human beings, endowed with the rare facility for developing spiritual consciousness, should not limit their activities to these four animal propensities. The civilized person should use the developed consciousness afforded by the human form of life, not to pursue bodily sense pleasure in the same manner as the animals, but to understand his eternal relationship with the Supreme Personality of Godhead, Krsna. This is the only way real pleasure is available to him, and this is the perfection of life.

Those persons who are trying to know the Absolute Truth by speculation, formulating their own ideas and concocting their own formulas for spiritual life, cannot be successful in their attempt. They become easy victims for so-called spiritual masters whose mastery is actually limited to the financial sphere. In their attempt to reach the transcendental platform by mental speculation, they may philosophize that they are God, but because they have not accepted a bona fide spiritual process for freeing the senses of material contamination, these so-called Gods are unable to achieve actual spiritual enjoyment and are therefore addicted to material activities for sense gratification. Such persons are pleased to accept any man as their spiritual master, provided such “spiritual master” agrees to make no attempt to limit the disciple’s sense-gratificatory activities. Those who have independently reached the faulty conclusion that the Absolute Truth is void or impersonal are in the same position; though they may say that everything is one, they are nevertheless addicted to material sense gratification.

The spiritual master cannot be an ordinary man, but he must be a self-realized soul, a devotee of Lord Krsna coming in disciplic succession. He must be completely free from the contamination of the material energy. He must be a great soul, mahatma. As described in Bhagavad-gita, such mahatmas are fully engaged in devotional service to Lord Krsna, knowing Him to be the Supreme Personality of Godhead, original and inexhaustible. They do not regard the Supreme as impersonal; they are in eternal association with Lord Krsna in His eternal transcendental form and are always engaged in chanting the glories of the Lord.

A great soul is very rare, and it is he only who is able to give the sincere searcher the unsurpassable gift of devotional service to Lord Krsna. The conditioned souls have forgotten Lord Krsna and are engaged in serving their senses, but by the grace of the bona fide spiritual master one’s original spiritual position of loving service to Krsna can be revived, and by this service one can experience the highest spiritual bliss.

The pleasure derived from devotional service is so great that the pure devotees of Lord Krsna reject all other kinds of happiness. Prahlada Maharaja therefore prayed to the Lord, “My dear Lord, I repeatedly pray unto Your lotus feet that I may simply be stronger in devotional service. I simply pray that my Krsna consciousness may be more strong and steady, because happiness derived out of Krsna consciousness and devotional service is so powerful that with it one can have all the other perfections of religiousness, economic development, sense gratification and even the attainment of liberation from material existence.” Frustrated by the experience of incessant material misery, unhappy persons sometimes try to become liberated from such misery by attempting to merge with the Supreme Absolute Truth. But it is confirmed by the great authority Bilvamangala Thakur that for one who is devoted to Lord Krsna in His personal form, liberation from material misery “stands at his doorstep with folded hands.” Such liberation is automatically achieved by one who becomes a devotee of Lord Krsna.

One who is trying for pleasure by materialistic activities or by trying to lose his identity by “merging” with the Supreme must perpetually continue in such activities without any hope of becoming satisfied, but the devotees of Lord Krsna experience such great bliss that all other pleasures seem insignificant to them. There is nothing that can compare to this bliss, and therefore one who is engaged in the loving devotional service of Krsna easily gives up the meager and temporary enjoyment of material sense-gratificatory activities. Krsna consciousness is so wonderful that even a drop of happiness in Krsna consciousness surpasses an ocean of happiness derived from any other activities.

This great transcendental bliss can be experienced by anyone who is engaged in devotional service under the direction of the spiritual master, and therefore devotional service to Lord Krsna is the perfection of existence. This devotional service is very rare, but in this age it is easily attained by the causeless mercy of Lord Caitanya Mahaprabhu. Lord Caitanya Mahaprabhu is Lord Sri Krsna, the Supreme Personality of Godhead Himself, and He has descended personally from His transcendental abode to freely distribute love of Godhead to the unfortunate souls who have fallen into this material world. The Supreme Lord has no obligation to descend to this material world, but due to His mercy upon the conditioned souls, He appeared on this planet 500 years ago in order to indicate to everyone by His personal example that the only possible way to achieve spiritual life in this age is by chanting the transcendental names of God. The most potent chant is Hare Krsna, Hare Krsna, Krsna Krsna, Hare Hare/Hare Rama, Hare Rama, Rama Rama, Hare Hare. He kindly descended Himself and described the full science of devotional service to His disciples, and He personally propagated the Hare Krsna sankirtana movement.

Even a drop of happiness in Krsna consciousness surpasses an ocean of happiness derived from any other activities, and there is an ocean of Krsna conscious happiness. This transcendental ocean of bliss is not only unlimited, but it is always increasing. We have no experience on the material platform of an ocean which increases, but the unlimited ocean of spiritual bliss can be unlimitedly increased by the sankirtana movement of Lord Caitanya Mahaprabhu.

It is by the grace of Lord Caitanya that His Divine Grace A.C. Bhaktivedanta Swami Prabhupada has come to America to spread this sankirtana movement, at a time when it is very much required. Although the Western countries are economically and technologically prosperous, their citizens are nevertheless experiencing great anxiety and frustration due to widespread spiritual poverty, and there is no place where one can receive instruction in spiritual science. The transcendental science of Krsna consciousness which Srila Prabhupada has brought to this country is therefore a most rare and valuable commodity.

There is a story that one devotee of Lord Siva was informed by Lord Siva that Sanatana Gosvami, a great Krsna conscious saint, had in his possession something very valuable. This devotee therefore went to Sanatana and requested that he give him the most valuable thing that he had. Sanatana Gosvami told him that he had a touchstone—a stone capable of transforming iron into gold—lying in a pile of garbage. Directed by Sanatana Gosvami, the devotee searched through the garbage and found the touchstone. A few experiments quickly revealed that the stone was indeed capable of changing iron into gold, and so the devotee went away with great satisfaction. But as he was walking on the road, he thought, “Sanatana Gosvami has left this valuable touchstone in a pile of garbage, and he seems not to care about it at all. He must have something even more valuable.” He therefore approached Sanatana again: “You must have something more valuable than this stone; please give it to me.” And so Sanatana Gosvami gave him the Hare Krsna mantra to chant.

This same Hare Krsna mantra is being offered freely to everyone by our spiritual master His Divine Grace A.C. Bhaktivedanta Swami Prabhupada, and the most intelligent people will take to this chanting process. Krsna consciousness is so valuable and rare that if a man has a million dollars, he will still be unable to purchase Krsna consciousness anywhere. Under the spell of illusion, we are thinking that material advancement is the goal of life, but we do not know that by this process no one is enjoying real happiness. The temporary material happiness of this world becomes insignificant when compared to the unlimited spiritual pleasure available from Krsna consciousness, and this is a fact which will be readily confirmed by any one of the steadily increasing number of devotees who have taken to this transcendental process. Chanting Hare Krsna is the scientific method recommended in the Vedic literature for reviving our dormant love of God, and when we are fully absorbed in Krsna consciousness we can become free from all material distress and resume our eternal association with the Supreme Personality of Godhead Lord Krsna in the spiritual sky. Lord Caitanya’s sankirtana movement makes this spiritual perfection available to everyone, and it is therefore the prime benediction for all living entities. It is the priceless gift now made available to people all over the world by the causeless mercy of His Divine Grace A.C. Bhaktivedanta Swami Prabhupada.