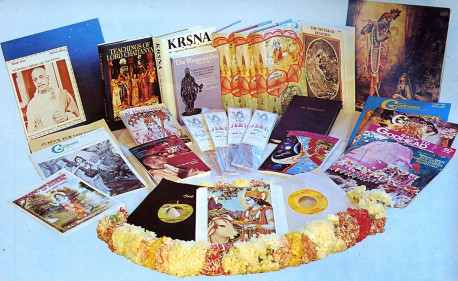 —1—
THE NECTAR OF DEVOTION

This book is especially intended for those who are engaged in the Krsna consciousness movement. The text is flooded with nactarian stories, philosophy and poetic verses about Krsna and His pure devotees—all taken directly from the Vedic literatures. It is a summary study of Bhakti-rasamrta-sindhu by Srila Rupa Gosvami, and it teaches us how to stimulate our original love for Krsna so that we can enjoy our blissful life.

KRSNA, The Supreme Personality of Godhead 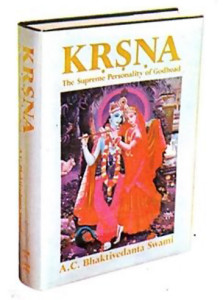 The activities of Krsna, which appear to be like those of an ordinary human being, can only be properly understood with the help of a bona fide spiritual master fully realized in the knowledge of their transcendental nature. His Divine Grace A.C. Bhaktivedanta Swami Prabhupada is such a spiritual master.

The Vedas are compared to a desire-tree because they contain all things knowable by mankind about both mundane necessities and spiritual realization. Srimad-Bhagavatam is the mature ripened fruit of this tree. It narrates the transcendental pastimes of the transcendental Personality of Godhead, Lord Sri Krsna.

Lord Caitanya, the most munificent incarnation of Godhead, appeared 500 years ago to demonstrate by example how to live the teachings of Bhagavad-gita in the present age. Teachings of Lord Caitanya recounts the words and deeds of this great saint. Lord Caitanya was famous as a scholar and spoke authoritatively on the highest aspects of the science of love of Godhead. He is the divine origin of the Hare Krsna movement and distributed love of God simpl by singing the holy names.

From the most authoritative sources, the famed 108 Upanisads of India, Sri Isopanisad supplies revealed evidence that the Personality of Godhead is the creator, maintainer and destroyer of everything that exists. The author’s transparent commentaries reveal that the Supreme Lord is “unembodied” and “formless,” since His form is not a material form which is subject to birth, disease, old age and death.

Now, for the first time, this renowned scripture is being brought to the West as it is—as taught by Krsna Himself and understood by His disciple Arjuna—in a unique translation and commentary. Krsna is the Supreme Personality of Godhead and the supreme authority on the Gita, and He initally delivered the Gita so that all persons could reach the perfection of life and be liberated from all suffering. His Divine Grace A.C. Bhaktivedanta Swami Prabhupada is passing on Krsna’s mercy in its full potency, as it is, so that everyone can attain to his rightful position, full of bliss and knowledge.

From the Introduction: “The perplexities of life appear like a forst fire which takes place without being set by anyone. The man in material perplexities is he who does not understand the problems of life. Out of many many human beings, the Bhagavad-gita is directed to the one who seeks to understand his position.”

—6—
EASY JOURNEY TO OTHER PLANETS

This book is an authentic discussion on the techniques and practice of the yoga system by which one can leave this body for travel to anti-material planets where life is blissful, eternal and full of knowledge.

This book presents the most authorized process of yoga practice in God realization, without any deviation from the original Vedic scriptual literature. In this present volume, the author forcefully exposes the speculative systems which depart from love of God as the ultimate goal of yoga.

—8—
THE FIRST STEP IN GOD REALIZATION

This book marks the continuation of His Divine Grace A.C. Bhaktivedanta Swami Prabhupada’s mighty task of translating all twelve cantos of Srimad-Bhagavatam. The First Step in God Realization comprises the First Chapter of the Second Canto, in which the sage Sukadeva advises his disciple Maharaja Pariksit to meditate on the universal form of God, in which the entire physical universes are seen as parts of the gigantic body of the Supreme Lord.

The continuation of Sukadeva’s teachings: He advises his disciple to go beyond meditation on the universal form, to meditation on the transcendental form of Paramatma, the localized representation of the Lord who resides in the hearts of all living entities.

—10—
BACK TO GODHEAD
The Magazine of the Hare Krsna Movement

BACK TO GODHEAD is the only magazine in the Western world to present the authorized, transcendental science of God realization known only to the saints of India’s unbroken disciplic succession.

Each month BACK TO GODHEAD brings you the Hare Krsna sankirtana movement as it spreads throughout the towns and cities of the world, fulfilling the prediction of Lord Caitanya Mahaprabhu 500 years ago in India.

Govinda Album (33 1/3 rpm)—These sound vibrations praise Lord Sri Krsna, the Absolute Truth, the Supreme Personality of Godhead. They were first uettered millions of years ago by Lord Bramha, the creator of the universe. Now they are sung by His Divine Grace A.C. Bhaktivedanta Swami Prabhupada, accompanied by sarod and tamboura, in a rare and unique recording. stero $5.00

Govinda (45 rpm)—Recorded by London’s Radha-Krsna Temple on the Apple label. A beautiful arrangement of the sacred hymn first sung by Lord Bramha. $1.25

Incense—Finest quality incense, manufactured by devotees of Krsna, large selection of fruit and flower flavors. Twenty sticks in each package. Each stick burns for one hour. $1.00 per package.