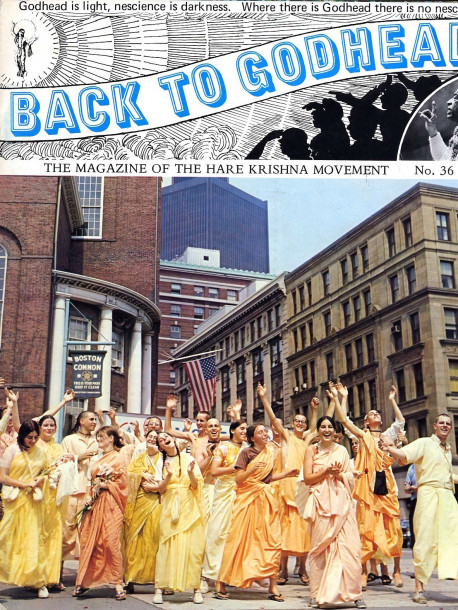 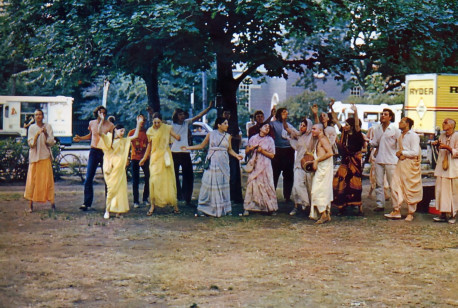 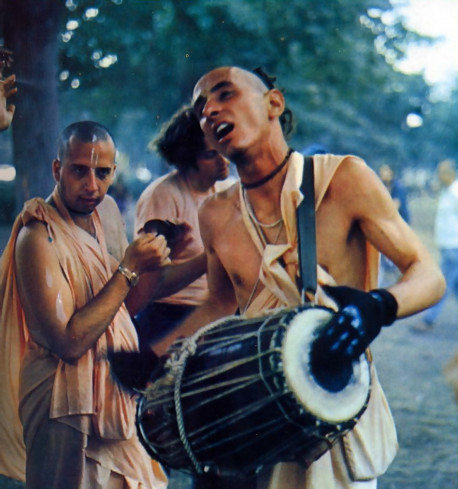 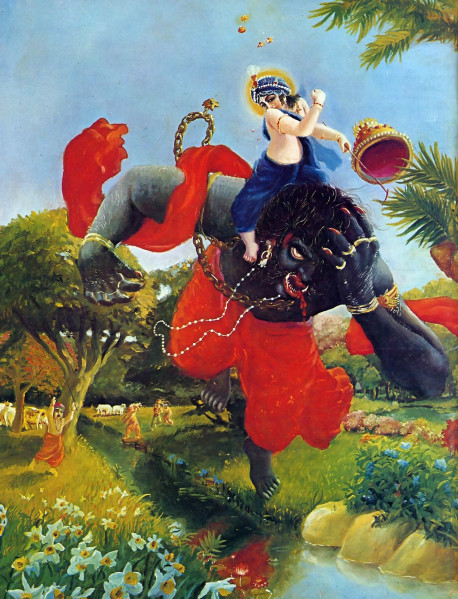 Sri Balarama is shown killing the Pralambasura demon with one blow of His fist. When Krsna, the Supreme Personality of Godhead, displays His eternal transcendental pastimes, He is always accompanied by Hid immediate expansion, Balarama, who appears as Krsna’s older brother. Balarama’s mission is identical with Krsna’s, as stated in the Bhagavad-gita: “In order to deliver the pious and to annihilate the miscreants, I advent myself millennium after millennium.” This is an illustration from Krsna, the Supreme Personality of Godhead, by His Divine Grace A.C. Bhaktivedanta Swami Prabhupada. 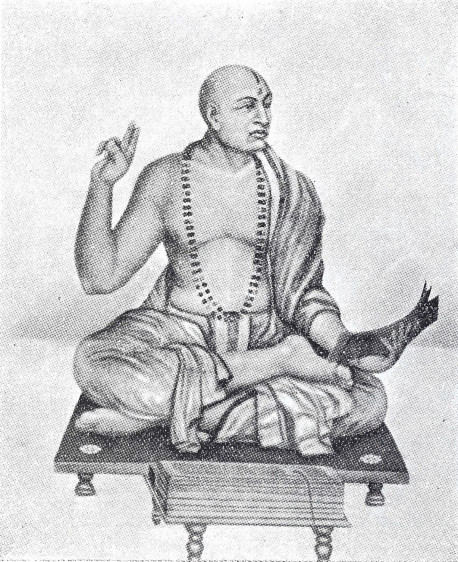 SRILA MADHVACARYA
The great spiritual master in the disciplic succession of Krsna consciousness appeared in the Twelfth Century and preached all over India. He was of powerful physique and was a powerful preacher. Madhvacarya always stressed that God and man are separate individual personalities even after liberation, and thus his philosophy is known as dvaita, or dual. 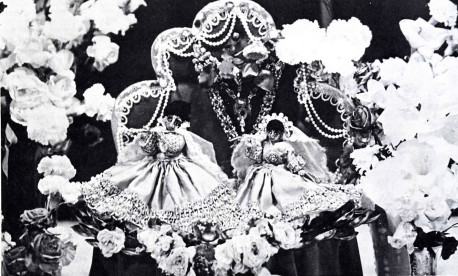 “The Supreme Personality of Godhead said: He whose mind is fixed on My personal form, always engaged in worshiping Me with great and transcendental faith, is considered by Me to be most perfect.”

The International Society for Krishna Consciousness was formed in 1966 by Prabhupada A.C. Bhaktivedanta Swami, who came from India on the order of his Spiritual Master to preach love of God to the people of the West. Prabhupada is in a line of disciplic succession going back directly 500 years to the time when Lord Chaitanya appeared in India, and from there back still further-5000 years—to the time when Krishna first spoke The Bhagavad Gita to His disciple Arjuna.

Krishna Consciousness is experienced as a process of self purification. Its means and end are an open secret, and there is no financial charge for learning Krishna Consciousness or receiving initiation into the chanting of Hare Krishna. The gist of devotional service to Krishna is that one takes whatever capacity or talent he or she has and dovetails it with the interests of the Supreme Enjoyer, the Lord, Sri Krishna. The writer writes articles for Krishna, and we publish periodicals in this way. The businessman does business in order to establish many temples across the country. The householders raise children in the science of God, and husband and wife live in mutual cooperation for spiritual progress. These activities are done under the sanction of the expert Spiritual Master, and in line with the Scriptures. Devotional service in Krishna Consciousness means regular chanting in the temple, hearing talks about the Pastimes of Krishna from Srimad Bhagwatam, and taking foodstuffs prepared for and offered to the Supreme Personality of Godhead.

By books, literature and records, the Society is dedicated to awakening the worldwide public to the normal, ecstatic state of Krishna Consciousness, so that all may regain their eternal position of favorably serving the will of Krishna. Sankirtan—congregational chanting—is carried to the people: in public parks, schools, on t.v., in the theater, on the streets. Krishna Consciousness is not an idler’s philosophy. Rather by chanting and by engagement in the service of Krishna, anyone who takes part will experience the state of “Samadhi,” ecstatic absorption in God-consciousness, 24 hours a day!

As the philosophy of Krishna Consciousness is non-sectarian, any man, Hindu or Christian, will become better in his faith by chanting the Holy Name of God and by hearing The Bhagavad Gita. Without knowledge and realization and loving service to the One Supreme God, there can be no religion. Let everyone rejoice in the Sankirtan Movement, and we may see the fulfillment of the prediction made by Lord Chaitanya 500 years ago: that the chanting of the Holy Names of God, Hare Krishna, would be carried to every town and village of the world. Only in this way can real peace prevail. It is sublime and easy.

IF YOU ARE INTERESTED IN BECOMING A MEMBER OF ISKCON, WRITE TO ISKCON NEW YORK FOR FURTHER INFORMATION