Back to Godhead > Prabhupada > The Operator of the Universal Machine

The Operator of the Universal Machine

On the Operator of the Universal Machine 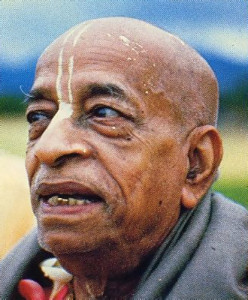 The following conversation between His Divine Grace A.C. Bhaktivedanta Swami Prabhupada and some of his disciples took place in May 1975 during an early-morning walk in Perth, Australia.

Srila Prabhupada: The atheist says there is no God, no operator of this big universal machine. But has the atheist any experience of a machine working without an operator?

Devotee: No. But you cannot compare this whole universe to any man-made machine.

Srila Prabhupada: Why? Just the other day we saw a huge printing press in Japan. It was printing the sheets, collecting them, stacking them—so many things were being done systematically, all by machine. Similarly, by the universal machine the seasonal changes are going on, the sun is rising, the moon is rising, the water of the oceans is moving in waves. Everything is being done systematically: the sun and the moon are rising exactly on time, the seasons are coming exactly on time. Is this not how a machine works?

Devotee: [taking the role of an atheist] But this universal machine is so wonderful that it goes on without an operator.

Srila Prabhupada: You’re a rascal—dull—so you cannot understand how someone is operating this universal machine. You cannot find in your experience any machine that is working without a person. Why do you bring this idea that without an operator this big universal machine is working? This is a false idea.

Devotee: There are some automatic machines.

Srila Prabhupada: No. Behind every machine there is an operator.

Devotee: Someone must turn it on and off.

Srila Prabhupada: Yes. There is no such thing as an automatic machine. That is impersonalism.

Srila Prabhupada: Have you seen the operator of the electric powerhouse? Do you think the powerhouse is working automatically?

Devotee: Well, we could see him if we wanted to. We could drive there right now.

Srila Prabhupada: Yes, and you can go to Krsna and see Him, also. But first you must become qualified.

Devotee: That’s not so easy.

Srila Prabhupada: It is very easy. As Krsna says in the Bhagavad-gita, bahavo jnana-tapasa puta mad-bhavam agatah: “By becoming purified through knowledge and penance, many have come to Me in the past.” So why are you disappointed? You can go to Krsna. Striyo vaisyas tatha sudrah: Even if you are low-born or less intelligent, you can go to Him. Krsna is open to everyone. Simply become qualified, that’s all. And what is the qualification? Krsna says, man-mana bhava mad-bhakto mad-yaji mam namaskuru: “Just always think of Me, become My devotee, worship Me, and offer your respect to Me.” These four things you must do. We have opened our temples for this purpose—so you can always think of Krsna, worship Him, offer obeisances to Him, and become His devotee. Then mam evaisyaty asamsayah: Without any doubt, you will go to Him. What is the difficulty?

Srila Prabhupada: That’s what you do if you’re a rascal, a fool. But if you are intelligent enough, you’ll ask, “Who is the operator? Let me see him.” That is the difference between an intelligent person and one who is dull.

I once heard a story about a little boy who was beating on a drum—dumm, dumm, dumm. He became inquisitive and thought, “Wherefrom is the sound coming? Somebody must be within the drum.” So he found a way to open the drum and look inside. This is intelligence. A dull student will think, “Oh, the sound is just coming, that’s all.” But an intelligent boy will always inquire, “What is this, father? ‘ What is this, father?”

So if one is very dull, just like the cats and dogs, he will not inquire about the operator behind this universal machine. In the human form of life this inquiry should come. Otherwise, you remain cats and dogs.

Devotee: What about the body, Srila Prabhupada? Isn’t that also a machine?

Devotee: But the scientists say that this body is more complicated than any machine because it can think, feel, and will, whereas machines can’t do that.

Srila Prabhupada: The scientists cannot see that the thinking, feeling, and willing is coming from the operator of the machine, the soul. These rascals cannot understand that. Krsna says, dehino ‘smin yatha dehe: Within the bodily machine is i the operator, the soul.

Srila Prabhupada: Yes, but they have not reached the ultimate goal.

Srila Prabhupada: They’re trying—that is admitted. But they are concluding that there is no operator. That is their foolishness. They have to go further and further until they conclude, “Yes, there is an operator.” That is the final goal of their investigation. Krsna says in the Bhagavad-gita, bahunam janmanam ante jnanavan mam prapadyate: “After many, many births of sincere inquiry, if one is actually intelligent he will surrender to Me.” And then, vasudevah sarvam iti: “He’ll understand that Vasudeva [Krsna] is everything.”

But these scientists waste time. When we say, “Here is Krsna—here is the operator of the universal machine,” they’ll not accept. They would rather waste time life after life, laboring and wondering. But one day they will come to the conclusion that Krsna is the operator behind this whole universe.