Having given up wealth and high position, they led lives and wrote books that still illumine the path of devotion. 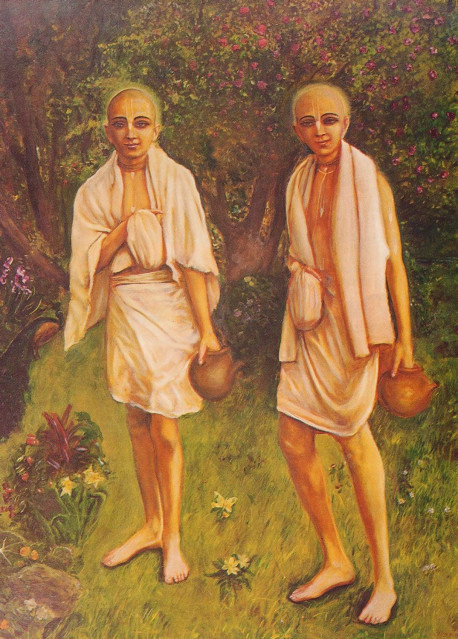 Five hundred years ago, in Bengal, India, Lord Krsna appeared in the form of Sri Caitanya Mahaprabhu to teach love of God through the chanting of Hare Krsna. Two of Lord Caitanya’s chief disciples were Srila Rupa Gosvami and Srila Sanatana Gosvami (shown at right). These two brothers received extensive instruction from the Lord in the science of devotional service, and the books they wrote form an important philosophical pillar of the Krsna consciousness movement.

Before joining Lord Caitanya, Rupa Gosvami and Sanatana Gosvami were named Dabira Khasa and Sakara Mallika, respectively. Though not Muslims themselves, they held top ministerial posts in the government of Nawab Hussain Shah, the Muslim king who ruled Bengal from 1499 to 1522. In addition to being expert administrators, however, they were also learned scholars fluent in Sanskrit, Persian, and other languages. The Nawab trusted them implicitly, and whenever he left his capital, Ramakeli, he would put them in charge. Thus the brothers enjoyed the privileges of high office.

While in the Nawab’s service, Dabira Khasa and Sakara Mallika heard about Lord Caitanya, and when He visited Ramakeli they took the opportunity to meet Him. Inspired by the Lord, they decided to retire from the government and join Him. Lord Caitanya gladly accepted them as His disciples and gave them the names they’re known by today.

Rupa Gosvami was the first to retire. After resigning from the Nawab’s court, he left Bengal and went to meet Lord Caitanya at Allahabad, where for ten days the Lord instructed him in the principles of devotional service.

Lord Caitanya told Rupa that people generally don’t know that the purpose of life is to reestablish one’s relationship with God, break free of repeated birth and death, and return to Lord Krsna’s spiritual kingdom. Lord Caitanya explained these goals along with the process for achieving them—devotional service to Krsna. Later, Rupa Gosvami wrote many Sanskrit works elaborating on these teachings.

Most prominent among Rupa Gosvami’s writings is the Bhakti-rasamrta-sindhu. His Divine Grace A.C. Bhaktivedanta Swami Prabhupada has presented this book in English in the form of a summary study called The Nectar of Devotion, and in the Preface he explains its significance: “The basic principle of the living condition is that we have a general propensity to love someone. No one can live without loving someone else. . . The missing point, however, is where to repose our love so that everyone can become happy. At the present moment the human society teaches one to love his country or family or his personal self, but there is no information about where to repose the loving propensity so that everyone can become happy. That missing point is Krsna, and The Nectar of Devotion teaches us how to stimulate our original love for Krsna and how to be situated in that position where we can enjoy our blissful life.”

After instructing Rupa Gosvami, Lord Caitanya sent him to Vrndavana, the holy place in northern India where Krsna enacted His childhood pastimes. The Lord then left Allahabad and went to Benares.

Meanwhile, Rupa’s brother Sanatana Gosvami hadn’t been able to get the Nawab’s permission to resign from the government. In fact, the Nawab was so angry at the prospect of losing his chief minister that he had Sanatana thrown in jail. But Sanatana managed to escape by bribing the jailer, and with little more than the clothes he was wearing he slipped out of Bengal by the back roads and caught up with Lord Caitanya in Benares.

Lord Caitanya was overjoyed to see His dear disciple and was deeply moved that he had taken so much trouble to come to Him. Sanatana Gosvami bowed down before the Lord, and the Lord lifted him up and embraced him. “My dear Lord,” Sanatana said, “I have passed my whole life in the deep well of sinful materialism. Still, by Your causeless mercy You have delivered me. Now, by that same causeless mercy, please tell me what my duty is.” Sanatana Gosvami also asked about his spiritual identity and how he could get free of the suffering that accompanies life in the material world.

Afterward, Lord Caitanya sent Sanatana to Vrndavana to join his brother in writing extensively on the science of devotional service and in reestablishing Vrndavana as a place of pilgrimage. Although the brothers had formerly been wealthy government officials, they now lived in Vrndavana as mendicants, wearing loincloths, eating and sleeping very little, writing transcendental literature, and absorbing themselves in the ecstasy of Krsna consciousness.

The writings and exemplary lives of Srila Rupa Gosvami and Srila Sanatana Gosvami have inspired generations of devotees in the disciplic line coming from Lord Caitanya (the Hare Krsna movement is part of this line), and many devotees have carried on the literary exposition of Krsna consciousness. Thus the books of Srila Rupa Gosvami, Srila Sanatana Gosvami, and their followers comprise the most voluminous, exacting, and consistent body of spiritual literature in the world.