This two-foot fold-out is one of forty-eight exquisite full-color illustrations that grace the Chinese edition of Srila Prabhupada ·s Light of the Bhagavaw.

Hong Kong—The Hare Krsna movement has its first full-fledged art book: a Chinese edition of Light of the Bhagavata, originally written in English by Srila Prabhupada in 1961 for Tokyo’s Congress for Cultivating Human Spirit.

Published under the auspices of Srila Tamal Krishna Goswami, one of ISKCON’s present spiritual masters, the new book measures almost nine inches by twelve and boasts forty-eight full-color reproductions of paintings by Madame Yun-sheng Li, one of the few remaining masters of the Gongbi school of Chinese painting.

Light of the Bhagavata begins with a series of poetic verses from the Srimad-Bhagavatam that describe the scenic beauty of Vrndavana, Lord Krsna’s childhood home, during autumn. The verses generally employ analogies that either criticize materialism and false religiosity, extol morality and God consciousness, or describe the transcendental pastimes of Lord Krsna and His companions. One of Madame Yun’s illustrations accompanies each verse.

The concluding section of the book contains Srila Prabhupada’s elaborate purports on the Bhagavatam verses, along with the verses themselves and black-and-white reductions of the illustrations.

The first printing of ten thousand was funded by Harivilasa dasa, of Spiritual Sky Scented Products in France. The North American branch of the Bhaktivedanta Book Trust will soon publish an English edition, and editions in Japanese and other languages will follow. 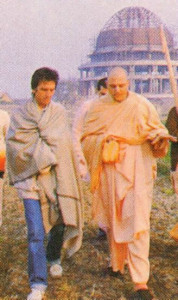 George and Srila Jayapataka Swami Acaryapada tour the site of Srila Prabhupada’s memorial at the Hare Krsna center in Mayapur.

In other publishing news, ISKCON now has a book in Urdu. It’s Srila Prabhupada’s Perfection of Yoga, translated from the English by a Muslim poet from Kashmir and published by Amogha-lila dasa in Bombay. Thousands of people have requested Krsna conscious books in Urdu, the national language of Pakistan, and more will be forthcoming.

Mayapur, West Bengal—Former Beatle George Harrison, an old friend of the Hare Krsna movement, recently paid his first visit to the ISKCON center at this holy place of pilgrimage. A guest of Srila Jayapataka Swami Acaryapada, who oversees ISKCON’s affairs here, George took part fully in the temple programs and toured the garden-filled grounds. The rapidly developing project impressed him, and he promised to return in 1984 for the opening of the ornate memorial to Srila Prabhupada now under construction.