Back to Godhead > Devotees > Preaching > Vegetarianism > Fried Food: Dispelling the Doubts for Vegetarians 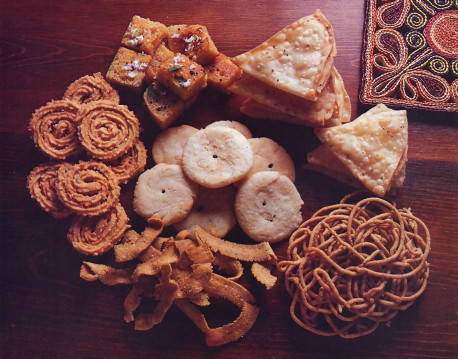 When serving the multicourse feast offered to all comers at ISKCON centers each Sunday, I’ve noticed that almost everyone enjoys fried foods, whether vegetable fritters, stuffed pastries, or the biscuits and crisps we’re featuring this month. Some guests (and devotees) take seconds or thirds, and if anything fried remains after the feast, there are always a few enthusiasts who’ll gladly take the leftovers home for a Monday-morning snack.

Yet sometimes when I’m serving, a guest will tell me, “Oh, nothing fried for me—too much cholesterol.” And once a teenage newcomer surprised me when she refused the nimkis I offered, saying, “No, thanks. I find fried things tasteless.”

As far as cholesterol goes, early last year the U.S. government completed a research project on that vital yet potentially dangerous yellow substance. With a price tag of $150 million, spent over ten years, the project was the broadest and most expensive in medical history. One of its conclusions was that heart disease is directly linked to the level of cholesterol in the blood, and that lowering the cholesterol level therefore markedly reduces the incidence of heart attacks. As a result of this finding, many people now shun cholesterol-laden foods, namely all foods of animal origin. So food fried in ghee (clarified butter), the traditional cooking medium in Lord Krsna’s cuisine, has become suspect.

Despite cholesterol’s reputation, however, the substance is essential to life. It is a building block of the outer cell membrane, and also a principal ingredient in the digestive juice bile and in the fatty sheath that insulates nerves. Although the liver produces most of the cholesterol found in the body, twenty to thirty percent generally comes from the food we eat. Problems arise only when we consume it in excess.

Since the Hare Krsna devotees don’t eat meat, fish, or eggs, they don’t have to worry about the cholesterol count in their fried foods. A tablespoon of ghee contains only 31 milliliters of cholesterol—nothing compared to the 274 milliliters—the recommended daily amount for most adults) in just one egg, what to speak of the whopping 372 milliliters in three ounces of beef liver. By eating only prasadam (vegetarian food that’s been offered to Lord Krsna), devotees avoid the deadly amounts of cholesterol in many nonvegetarian foods. And the moderate amounts of cholesterol devotees do eat, in ghee and other dairy products, is used by the body as an essential building block.

But besides being relatively low in cholesterol, fried vegetarian foods are succulent and flavorful when properly cooked. In the case of vegetable fritters, this succulence is due to the intense heat of the ghee or oil, which “surprises” the food, instantly sealing its pores. Then, with its surface closed, the food literally steams in its own juices to produce a light, fresh taste.

In the case of biscuits and crisps, the intense heat of the frying medium permeates the grains to make them either crisp, flaky, or tender depending on the density and ingredients of the dough. The medium also acts as a preservative. If you store these treats in a sealed container, they’ll keep for up to two weeks.

But to deep-fry properly you must be attentive to timing, temperature, and technique. Use enough ghee or oil to completely cover the food while it fries, and your pot should be big enough to provide ample room for the currents of hot ghee or oil to circulate freely. Also, before adding a new batch of food, allow the ghee or oil to return to its optimal temperature.

If you neglect to keep the ghee or oil hot enough, the food will absorb too much of the frying medium. Food that’s been fried at too low a temperature is greasy and heavy—a most unappetizing combination. (The teenager I mentioned earlier, who had said fried foods were tasteless, had obviously eaten improperly fried food.) And even though the frying medium may be hot enough, if you overcrowd the pot or try to fry food taken directly from the refrigerator or freezer, you may sufficiently lower the temperature to cause absorption of the ghee or oil.

You should also avoid letting the ghee or oil become too hot. Then the outside of the food scorches before the inside is fully cooked. Excessive heat can also cause the ghee or oil to smoke, which you should avoid at all costs. When ghee or oil smokes, it begins to decompose, creating a noxious compound that can inflame your respiratory system. In addition, overheated ghee or oil will impart an unpleasant flavor to food and cannot be reused.

Ghee and various oils smoke at different temperatures. For example, ghee smokes at 4l0°F, corn oil at 475°, peanut oil at 440°, sesame oil at 420°, and olive oil at 375°. There are special thermometers you can use to test the smoking temperature of the oil you’re cooking with. You can also use a candy thermometer.

As long as the frying medium has not smoked, you can save and reuse it a number of times. But be sure to clean it after each use by straining it, once it has cooled, through several layers of cheesecloth. Ghee and oil store best in a cool place—the refrigerator if there’s room. Oils may become cloudy in the refrigerator but will clear again when they reach room temperature. The cloudiness is harmless.

But all ghee and oil, no matter how carefully strained and stored, will eventually become unusable. As food fries, it releases microscopic particles that remain in the cooking medium and eventually burn, giving overused ghee or oil a dark color and a burnt smell and flavor.

All this may seem like mundane information—out of place in Lord Krsna’s cuisine. But a devotee feels that this is the first place for such information. Our cooking for Lord Krsna should be of the highest possible standard. After all, master chefs in restaurants throughout the world are cooking par excellence for their customers, multimillion-dollar food companies are luring shoppers with their latest packaged and frozen delights, fiancis are being wooed with gourmet delights, and housewives are enamoring their husbands with tasty dinners. So why shouldn’t devotees make the finest and most expertly cooked dishes for Krsna, the Supreme Personality of Godhead?

1. Combine the sifted flour, salt, and cumin seeds. Rub in the melted butter with finger-tips until it is evenly distributed. Pour in ¼ cup water, vigorously gathering the ingredients into a stiff, rough dough. Add a little more water, a half-tablespoon at a time, until you have a smooth, stiff pastry dough. Knead for about 5 to 8 minutes, until the dough is pliable. Gather the dough into a round ball, drape with a moist towel, and allow it to Sit for at least 30 minutes.

2. Roll the dough into a log and cut into 16 equal pieces. Flatten each piece into a smooth patty. On a smooth, slightly oiled counter, roll each piece with a rolling pin into a paper-thin disc. Brush a thin film of ghee over the surface. Fold in half. Brush a thin film of ghee over the half-circle. Fold into quarters-a roughly triangular shape. Now press the pastry and roll it out into a paper thin triangle. Drape rolled pastry with a damp cloth and continue rolling other pieces.

3. Heat the ghee or oil in a deep-fryer over a medium flame to 325°F. Place one pastry at a time in the hot ghee or oil, and press it with the back of a perforated spoon to keep it submerged. It will begin to puff unevenly. Fry for about 2 minutes on each side, or until both sides are crisp and golden brown. Then lift them out and drain on absorbent paper. Offer the warm pastries to Krsna. Cooled, they may be stored in air-tight containers.

1. Combine the sifted flour and salt. Rub in the melted butter with fingertips until it is evenly distributed. Pour in the water, stir vigorously with fingers, and gather the dough into a ball. Knead for about 8 minutes, adding a few more drops of water, until you have a smooth pastry dough. Drape with a damp towel and allow to sit at least 30 minutes.

2. Roll the dough into a log and cut into 12 equal pieces. Flatten each piece into a smooth patty. On a smooth, slightly oiled counter, roll one patty into a very thin disc. Slice into ½-inch strips and then cross-cut to yield ½-inch squares.

3. Heat the ghee or oil over a medium flame to 325°F. Fry the squares from one disc for about 2 minutes, or until pale gold. Remove with a slotted spoon and allow to cool on absorbent paper. Remove the oil from the flame while rolling and cutting another disc.

4. Reheat the ghee or oil and repeat the process until all the squares are fried. Then offer to Krsna. Chips may be stored in an airtight container for 7 to 10 days.

A delicately seasoned savory with an attractive appearance A paste made from chickpea flour is forced through a star-shaped disc and formed into 2 ½-inch-round spirals. The “Seviya” machine required to shape the savory is available through Indian or Asian grocery and mail-order supply stores.

2. Pour in the water, and gather the mixture into a ball; remove to a clean flat surface, and knead until smooth. Divide the dough into 2 pieces. Place one portion in a “Seviya” machine with a star-pattern disc. Press the dough through the disc onto a foil-lined cookie sheet, forming individual 2 ½-inch spirals. Shape all of the dough in this manner.

300°F for 3 to 4 minutes on each side, or until crisp and golden brown. Remove with a slotted spoon and drain. Offer to Krsna warm or cooled to room temperature. Spirals may be stored, well sealed, in a cookie jar or tin for 7 to 10 days.

1. Combine the flour, salt, and semolina or farina. Rub in the melted butter with fingertips until it is evenly distributed. Add the yogurt and 4 tablespoons of water, and quickly gather the mixture into a stiff dough. If it is too crumbly to gather, sprinkle in up to 2 additional tablespoons of water. Knead into a smooth dough and divide the dough into 2 equal portions.

2. Add ½ teaspoon ground pepper to one portion of the dough and 1 teaspoon of ajwan seeds to the other. Knead in the new ingredients. Drape both portions with a damp cloth and allow to sit for 30 minutes.

3. By hand, roll each portion into a 12-inch log, then cut each log into 12 pieces with a rolling pin roll each piece into a 2 ½-inch disc. The edges will be uneven because of the dough’s stiffness. Place a whole peppercorn in the center of each of the 12 pepper-flavored biscuits and press it firmly into the dough.

4. Heat the ghee over a medium flame to 290°F. Slip in 5 or 6 discs and fry for 5 minutes on each side, until crisp and pale gold. They should swell slightly and not be allowed to become dark brown. During the last 2 or 3 minutes, the heat may be raised to 300°F or 350°F to make the texture crisp and to shorten the frying time. If the flame is too high, the pastries will remain raw inside and swell into puffed ovals. So regulate the heat carefully.

5. Remove with a slotted spoon, drain on absorbent paper, and cool to room temperature. Reduce the temperature of the ghee and fry the rest of the discs in the same way. Offer to Krsna. In a tightly sealed container, the pastries will keep for 10 to 14 days.

6. Allow the ghee to cool for 15 minutes after frying is complete. While it is still warm, strain it through a fine sieve to remove bits of seasonings and flour.