Back to Godhead > ISKCON > News > Bombay Ratha-yatra Festival Biggest Ever 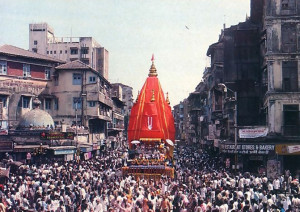 This year’s Ratha-yatra festival was Bombay’s largest yet, according to Srila Gopala-Krsna Goswami Bhagavatapada, one of ISKCON’s spiritual masters, who oversaw the event. The cart rolled through downtown Bombay for five hours, and the devotees on the cart tossed to the enthusiastic parade viewers half a million packets of food offered to Krsna.

Dallas, Texas—Recently, a city council meeting here began with an invocation by Srila Tamal Krishna Goswami Gurudeva, one of ISKCON’s spiritual masters, who oversees its affairs in the southwest U.S.

“Ladies and gentlemen, please rise,” an announcer said at the start of the meeting, when a Dallas religious leader customarily steps to the podium and gives an invocation. For an ISKCON representative to have been invited to give the invocation indicates that ISKCON is gaining acceptance as a bona fide spiritual movement in Dallas. 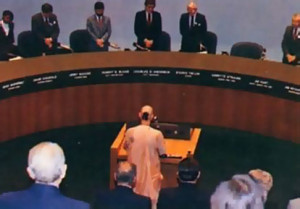 Srila Tamal Krishna Goswami first read a verse from the Bhagavad-gita As It Is, by His Divine Grace A.C. Bhaktivedanta Swami Prabhupada: “Whatever action a great man performs, common men follow. And whatever standards he sets by exemplary acts, all the world pursues” (Bg. 3.21). He also read Srila Prabhupada’s brief commentary.

Then he told the council members that an ideal leader is concerned with both the material and spiritual well-being of the citizens. A happy and prosperous life with the ultimate goal of going back to the kingdom of God, he said, depends on God’s blessings and upon avoiding intoxication, gambling, illicit sex, and unholy foods. He advised that a pure life can be maintained by chanting the holy names of God, as revealed in the world’s scriptures.

A week later, ISKCON received an invitation to another city council meeting later this year.

Guatemala City—Richard Shaw, at age twenty-two, is well known as the youngest congressman in Latin American history. He is also widely known as a disciple of Srila Hridayananda dasa Goswami Acaryadeva, one of ISKCON’s spiritual masters.

Shaw, whose devotee name is Rupa-manjari dasa, is one of four spokesmen for the Union of the National Center, a party founded by the owner of Diaro El Grafico, Guatemala’s foremost daily newspaper.

As an El Grafico editor, Rupa-manjari writes a bi-weekly column and has published many articles on Krsna consciousness, including a thirty-two-page Sunday supplement on vegetarianism. He was appointed head of the youth branch of the new party and later accepted a place on the party’s election ticket.

“You’ve got to understand,” he was told, “we’re not established in your district, so you definitely won’t be elected this year.”

“I decided to try anyway, knowing it would be hard work,” Rupa-manjari commented after a strenuous four-month campaign. “I started visiting bus stops and people’s homes. I was really surprised to win. It was impossible, but by Krsna’s grace I was successful. The incumbent candidate, a lawyer, didn’t set foot in the district, preferring to conduct his campaign by television.”

Taped programming is supplied by the main RKC station in Florence, Italy Programs such as Radio Kitchen, East Meets West, and Radio Bambini, a children’s show, have already proven popular in Italy.

A survey conducted on the streets of Lugano after several weeks of broadcasting indicated that perhaps half of the potential Swiss-Italian listening audience of seventy-five thousand was familiar with the Hare Krsna station.