The Holy Cow And Her Wholesome Milk

The Holy Cow And Her Wholesome Milk 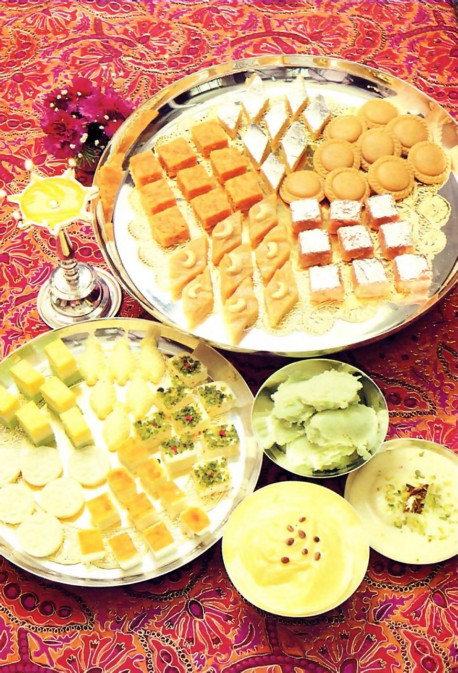 August 31 marks the anniversary of Lord Krsna’s appearance in the world some fifty centuries ago. In the Bhagavad-gita Krsna explains that He periodically appears on earth to protect His devotees, subdue the atheists, and establish the principles of religion. But He comes for a more intimate reason as well: to enjoy transcendental pastimes with His pure devotees and to attract the rest of us to love Him and serve Him.

Although Lord Krsna could have chosen a family of intellectuals (brahmanas) or leaders (ksatriyas) in which to enact His childhood pastimes, He chose instead a family of simple cowherds (vaisyas) residing in Vrndavana, a town in India ninety miles south of present-day Delhi. Naturally, in those pastimes cows, calves, milk, and milk products all played important roles.

Sometimes Krsna would sneak into the houses of the cowherd women, or gopis, and steal their yogurt and butter. Then He would run off to a hidden spot to enjoy His booty and share it with the monkeys from the nearby forest. When the gopis would catch Krsna in this mischief, He’d feign innocence and say, “Why do you call Me a thief? Do you think butter and yogurt are scarce in My house?” Confronted with the evidence—the remains of the stolen butter and yogurt—Krsna would chide the gopis: “This butter and yogurt are useless anyway. Even the monkeys won’t eat it.” (Of course not: Krsna had fed them so much that they couldn’t cat another bite!)

Krsna’s mother, Yasoda, thought that little Krsna was stealing butter from the other gopis’ houses because He didn’t like the butter in her house. To improve her own butter, Yasoda picked out several of her best cows and had them eat special grass that made their milk very rich, fragrant, and flavorful. After collecting a pailful of this milk, she began churning butter for her transcendental child.

As Yasoda busily churned, Krsna woke up from His nap and felt hungry. He went to His mother and caught hold of the churning rod. Yasoda stopped churning and looked at her divine son with great love. Then she lifted Him tenderly onto her lap and began to nurse Him with her breast milk. But suddenly she saw that the milk on the stove was boiling over. So she quickly put her son down and rushed to tend the overflowing milk.

Krsna, angry at being left unsatisfied, picked up a stone, broke the container of freshly churned butter, and ran off to a secluded spot to eat it.

Meanwhile, Yasoda returned. Seeing the broken pot, she concluded that Krsna was the culprit. She followed His butter-smeared footprints until she found Him sitting on an overturned wooden mortar used for grinding spices. He was giving out butter to the monkeys, just as He’d done after plundering the gopis’ houses.

Yasoda had such intense love for Krsna that she thought of Him as her little son; she didn’t care to know that He was the Supreme Personality of Godhead, greater than the greatest. Thus, in a pique at her naughty child, she bound Him to the mortar to punish Him—and Krsna greatly relished her motherly anger saturated with affection.

When Lord Krsna had grown up a little, He and the other cowherd boys His age began taking care of the calves, and after Krsna turned six the boys were put in charge of some of the cows. Each day the boys would play together while the cows ate the soft grasses in Vrndavana’s forests and pasturing grounds. The cows Krsna tended had names, and Krsna would call them with love. They would immediately respond by mooing, and the boys would enjoy this exchange to their heart’s content.

Lord Krsna’s uncommon love for the cow is recorded in a prayer from the Vedic literature: “I offer my respectful obeisances again and again unto Govinda [Lord Krsna], who is the worshipable Deity for all brahminical men, the well-wisher of the cows and brahmanas, and the benefactor of the whole world.”

As we can see, the cow is no ordinary animal, and her milk isn’t ordinary either. In Vedic culture the cow is known as “mother,” because after a child has been weaned from His mother’s breast milk and his digestive system has sufficiently developed, he gets essential nutrients from cow’s milk.

What’s more, the cow is the basis of a prosperous and peaceful society. Cow’s milk nourishes us, cow dung fertilizes the fields, and the bull tills the land to provide grains and vegetables. (See Ox Power, BACK TO GODHEAD, Vol. 18, No. 5.) By living a simple agrarian life based on the cow and brahminical principles—a way of life Lord Krsna Himself showed us how to lead during His childhood pastimes—everyone can be healthy, happy, peaceful, and prosperous.

So when we hear so-called nutritionists condemn milk as a mucus-forming menace to health, and when we hear others claim that their “science” shows us it’s perfectly all right to slaughter the cow and eat her flesh, we can only feel pity that such people haven’t heard enough of Lord Krsna’s philosophy to know better. Unfortunately, in our “advanced” civilization, people neglect spiritual knowledge and promote cow-killing on a massive scale. “It is to be understood, then,” writes Srila Prabhupada, “that human society is advancing in the wrong direction and is clearing the path to its own condemnation.”

A civilized society enjoys the cow’s blood not directly, in meat, but indirectly, as milk. And milk is so extraordinary that from it you can prepare hundreds of other dishes—not only yogurt, butter, and cheese but also milk sweets (some are featured this month). If you’ve never tasted a milk sweet that’s been offered to Lord Krsna, get ready for a delightful, transcendental treat. 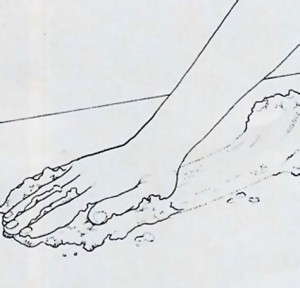 Yield: 18 to 20 small decorative molds or round patties
Preparation time: about 1 hour

1. Prepare curd according to the recipe in BACK TO GODHEAD, Vol. 18, No. 6. (If you don’t have that issue, write us and we’ll send you the recipe.)

Place a 5- or 6-pound weight on the curd for 15 minutes to a half hour, or until the whey has stopped dripping steadily. Unwrap the cheesecloth, break open the cheese, and remove the excess liquid by pressing the cheese with a clean, absorbent towel. On a clean counter-top or slab of marble, spread the cheese thin with your palms. Then gather the curd into a ball. Repeat this process several times until the curd becomes firm, velvety smooth, and slightly oily. Now gather it into a ball, add the sugar and (if you wish) cardamom powder or rose essence, and mix well.

2. Place a 10- to 12-inch, well polished heavy metal frying pan over a very low flame. Stirring constantly with a wide wooden spoon, cook the sweetened cheese for 15 to 20 minutes, or until its surface is faintly glossy and it begins to draw away from the sides of the pan.

3. Transfer the cheese to a clean tray and allow it to cool. Then roll it into balls or patties or press it into decorative molds, and offer to Krsna.

Prepare as directed, but add a 1-inch piece of pure vanilla bean during the cooking. Remove the vanilla as the sandesa cools.

When fresh whole milk is boiled until nearly all the water is evaporated, the remaining creamy paste is called khoa. This creamy milk-dough is the foundation of smooth milk fudge (burfi), daintly solidified milk cakes (pera), and many other milk sweets.

Condensing milk may sound simple, but it’s a bit tricky. The milk progresses through various stages: first a full foaming boil, then a full boil, later a gentle boil, and finally a gentle simmer. At the last stage, you’ll have to stir the viscous condensed milk rhythmically, continuously, and thoroughly to prevent scorching. With a little patience and practice, you’ll become expert at producing batch after batch of creamy khoa.

1. Pour half the milk into a heavy 4- to 6-quart saucepan and bring to a full, foaming boil over a high flame. To prevent the milk from sticking, stir constantly with a wide wooden spatula. If necessary, lower the flame slightly to prevent the milk from boiling over, but continue to boil vigorously for 12 to 15 minutes.

2. Add the remaining milk and continue stirring as the milk comes again to a full boil. Stirring constantly, maintain a full boil for 12 to 15 minutes.

3. Lower the flame slightly to the medium-high range and boil the milk until it thickens to the consistency of heavy cream.

4. Reduce the flame to the medium to medium-high range and cook the milk down while vigorously, constantly, rhythmically, and thoroughly stirring. Continue until the milk reduces to a thick paste that draws away from the sides of the pan. The volume should be about 1/6 of what you started with.

5. Remove the pan from the flame, transfer the khoa to a platter, and allow it to cool. It will harden to a fudge-like milk pastry as it cools to room temperature.

1. Combine the khoa, sugar, and cardamom powder and mix well. Place the mixture in a 10-inch frying pan (nonstick cookware is ideal) over a medium flame. Stirring constantly, cook until the mixture is thick and dry. Remove from the flame and cool until the preparation is comfortable to handle, firm, and slightly warm.

2. Butter a shallow tray. Place the spiced khoa on a clean surface and knead it until it’s creamy smooth. The texture should be firm enough to shape. If it’s too loose or moist, knead in some extra-fine skim-milk powder. If it’s too thick, sprinkle in a little milk.

3. Divide the mass of pera and roll it into 12 balls. Press them into decorative molds, or flatten them slightly into patties and press your thumb gently in the center of each to form a small dent. For a garnish, press a few slivers of pistachio into each pattie. Offer to Krsna. 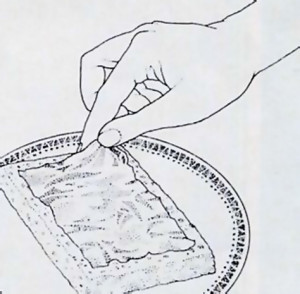 Yield: about 25 small pieces
Preparation time: about a hour

1. Combine the khoa, sugar, nuts, and cardamom and blend thoroughly until the mixture is smooth.

2. Place the mixture in a 10- to 12-inch frying pan (nonstick cookware is ideal) and begin heating it over a medium flame. While stirring vigorously, thoroughly, and constantly, cook for about 10 minutes, or until the mixture is thick and dry. It should pull away from the sides of the pan into a compact mass.

4. Carefully cover the surface of the burfi with silver foil. When the cake is firm, cut it into 25 small squares with a sharp, buttered knife. (If necessary, wipe the knife clean after each cut.) Offer Krsna the first pieces.

Note: Burfi will harden as it sits. If you keep it well covered, you can safely store it for up to 3 days in the refrigerator.