Back to Godhead > ISKCON > News > U.S. Senator Gets Srimad-Bhagavatam 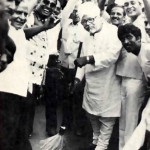 Bombay—The mayor of this most cosmopolitan Indian city was the guest of honor at ISKCON’s recent Ratha-yatra Chariot Festival.

Manmohan Singh Bedi rode the fifty-foot-high canopied chariot for more than an hour. Sitting at the feet of the carved Deity form of Lord Jagannatha (“Lord of the Universe”), the mayor and Srila Gopala Krsna Goswami Bhagavatapada, who oversees ISKCON’s affairs in Bombay, delighted the crowds along Jagannatha Shenker Seth Road by tossing them thousands of packets of sanctified food. 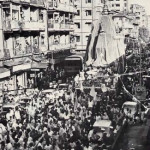 Throngs of Bombayites join the procession. More than one million participated.

A high point in the parade came when the mayor dismounted, took up a broom, and humbly swept the street before the majestically moving chariot. Everyone cheered, recalling how a great devotee of Lord Caitanya’s named King Prataparudra had won the Lord’s favor by doing the same thing five hundred years ago during a Ratha-yatra procession in Puri, Orissa. 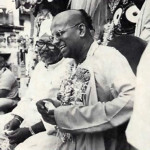 Srila Bhagavatpada and Mayor Bedi ride together with Lord Jagannatha.

After a four-hour procession, devotees began a nine-day spiritual festival at a beach-front park. It featured devotional discourses, music, film, and feasting (more than ten tons of sanctified food were given out). All told, upwards of a million people took part, and fifteen Bombay newspapers gave the event elaborate coverage. 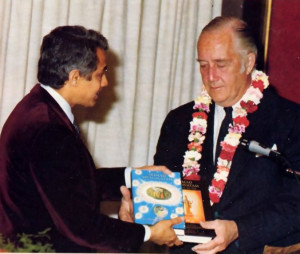 “I am overwhelmed,” said Senator Charles Mathias (R-Md.) recently upon receiving the Srimad-Bhagavatam from ISKCON life member Dr. Vibhakara Mody. “I’ll read the entire thirty volumes. Perhaps when I have read them all I’ll know the answer to the budget problem,” he quipped. The occasion was the seventh annual dinner of the Indian Medical Association of America, held in Washington, D.C. Senator Mathias and Ambassador R. K. Narayanan (another ISKCON life member) were the guests of honor. After addressing the assembly, the senator and the ambassador received sacred food and garlands that had been offered to Lord Krsna.