What food is sometimes buttery, sometimes sweet, sometimes spicy, sometimes mellow, often unusual and always tastes good? Answer: Krishna-prasada. “Prasada” means “God’s mercy,” and it specifically refers to food that’s been offered to Krishna. If you’ve ever been around Lord Krishna’s devotees, you may well have been offered some prasada in the form of exotic dishes like puris, halavah, kichories or laddus, or perhaps just slices of apple with dates and nuts. What’s the difference between prasada and ordinary food? They may look quite the same. But the difference is that prasada has been offered to Lord Krishna in love by one of His devotees, whereas ordinary food has not.

The special quality of a devotee that distinguishes him from others is that he recognizes God’s supreme dominion over all that is. He knows that the Supreme Lord, Krishna, is creating and providing not only all the food we eat, but also the air we breathe, the water we drink and, in fact, the very earth on which we live. In Bhagavad-gita Lord Krishna says:

“I am the source of all spiritual and material worlds. Everything comes from Me. The wise who perfectly know this engage in My devotional service and worship Me with all their hearts.” (Bg. 10.8) Thus the devotee, out of a sense of duty, gratitude and love, first offers all his food to Krishna. Although Cod is independent and in no way needs such offerings, our desire to serve Him is natural, like the natural wish of a mature child to serve the parents who have provided for him all his life.

The offering of prasada gives a good example of how a devotee acts in relationship with Krishna. A Krishna conscious devotee does not ask, “O God, please give us our daily bread.” No. The devotee does not ask God to be his order supplier, for he knows that God is already providing everything for us—and for all other living beings, from the elephant to the ant. Therefore the devotee accepts the food that the Lord has already provided—food made with fruits, vegetables, milk, sugar and grains—but first he offers the food back to Krishna. The food may be offered to the Deity of Krishna in the temple, or to the spiritual master, who is Krishna’s representative. In any case, it is always understood that the offering is made through the spiritual master. 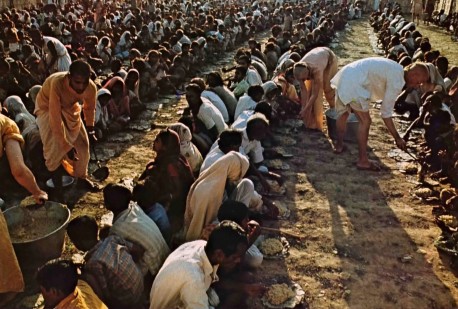 Even tiny remnants of the offering are greatly valued because the food has become Krishnaized, spiritualized.

Nondevotees, of course, will object that such devotion is senseless. This world and the life in it, they will say, have sprung from an impersonal lifeless force. The perfect order and harmony of the universe originated from the dust of outer space. Life originally came from matter—from some chemicals that came together by chance. Krishna reciprocates with such dull materialists by remaining hidden from their view, until finally, at the end of their contaminated lives, He comes to them as death and takes away everything they have.

Those who have understood that God exists but who have not yet fully understood the science of devotion may ask why, since God is already providing everything, we should take the trouble to offer our food to Him. Aside from expressing gratitude, we should offer our food first to the Lord because this will protect us from the materialistic snares that would otherwise entangle us as we eat. That every action has an equal and opposite reaction is a commonly known law in physics. What people generally don’t know, however, is that this law extends far beyond the boundaries of physics; it is a law of nature that profoundly affects almost every aspect of our lives. Even a simple act like eating can involve us in a network of material reactions. 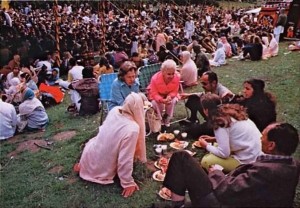 At San Francisco’s annual Rathayatra Festival last year, 12,000 full plates of prasada were distributed. With devotees serving seconds, thirds and fourths, one and all took to their full satisfaction.

The Vedic literature says, jivo jivasya jivanam: one living being serves as food for another. To eat, we all must kill. Because animals are less intelligent, the laws of nature do not hold them responsible for the killing they naturally perform. However, when a human being kills, he becomes involved in a complex network of actions and reactions. For the suffering he inflicts, he himself will have to suffer at some time in the future. But by preparing food for God and offering it to Him before eating it, one becomes exempt from the reactions imposed by material nature. As stated in Bhagavad-gita, “The devotees of the Lord are released from all kinds of sins because they eat food which is offered first for sacrifice. Others, who prepare food for personal sense enjoyment, verily eat only sin” (Bg. 3.13)

Commenting on this verse, Srila Prabhupada says, “The devotees of the Lord, who are in Krishna consciousness, offer food to Krishna and then eat—a process which nourishes the body spiritually. By such action not only are past sinful reactions in the body vanquished, but the body becomes immunized to all contamination of material nature. When there is an epidemic disease, an antiseptic vaccine protects a person from the attack of such an epidemic. Similarly, food offered to Lord Visnu [Krishna] and then taken by us makes us sufficiently resistant to material affection, and one who is accustomed to this practice is called a devotee of the Lord.” 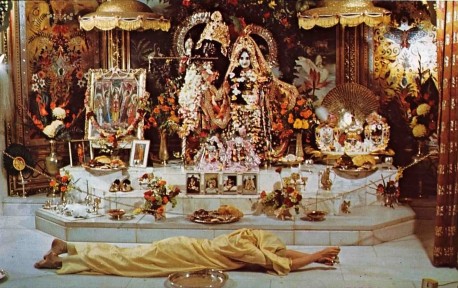 Krishna Himself appears in the form of the Deity in the temple to accept the service of His devotees. 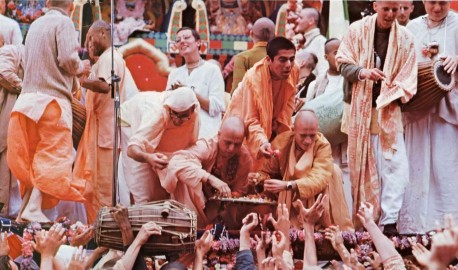 Even tiny remnants of the offering are greatly valued because the food has become Krishnaized, spiritualized.

Neophytes in self-realization offer their food to Krishna according to the instructions of advanced devotees whose only interest is to please Krishna. Such great souls serve Krishna out of love and expect nothing for themselves in return. But how does one please that Supreme Person, who is completely independent, fully cognizant and all-pervading and who is the original cause of all causes? Simply by following His instructions—and the instructions of His pure devotees—with a serious and sincere attitude. Lord Krishna says: 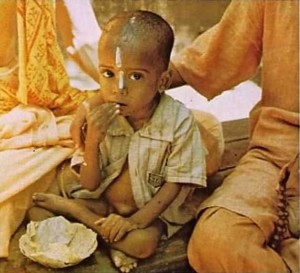 In the village of Mayapur in West Bengal, India, devotees feed up to 20,000 people daily a substantial diet of rice and dahl (a high-protein bean soup). With donations from the West, this program is expanding to other poverty-stricken areas.

If one wishes to be purified by rendering transcendental devotional service to the Supreme, he should find out what the Lord wants of him. One who loves Krishna will give Him whatever He wants, and he avoids offering anything undesirable or unasked for. Thus, one should not offer meat, fish or eggs to Krishna. If He desired such offerings, He would have said so. Instead, He clearly requests a leaf, fruit, flowers and water, and He says of such an offering, “I will accept it.” Therefore we should understand that He will not accept meat, fish and eggs. Vegetables, grains, fruits, milk and water are the proper foods for human beings and are described by Lord Krishna Himself. Whatever else we eat cannot be offered to Him, since He will not accept it. Thus we cannot be acting on the level of loving devotion if we offer such foods. 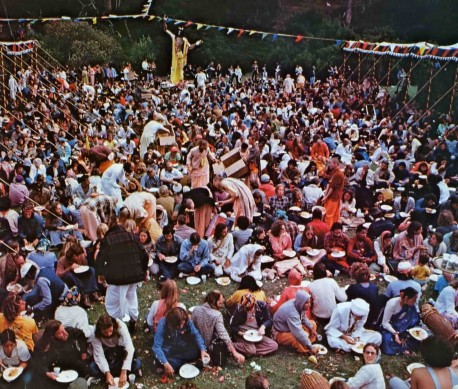 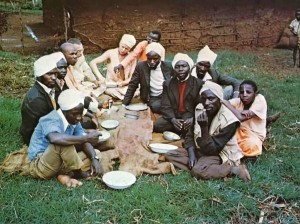 Once the Supreme Personality of Godhead has accepted an offering (He can accept it by seeing it and hearing the prayers of His devotees), the food, now prasada, has tremendous spiritual potency. Therefore devotees distribute it freely to everyone. Such spiritualized food increases one’s duration of life, purifies one’s existence, and gives strength, health, happiness and satisfaction. Moreover, it nourishes one’s transcendental realization. And that is a special quality that one cannot purchase with any amount of money. 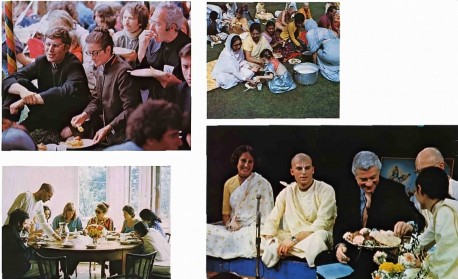 One Response to Lord Krishna’s Prasadam