Back to Godhead > ~Featured~ > Divine Culture 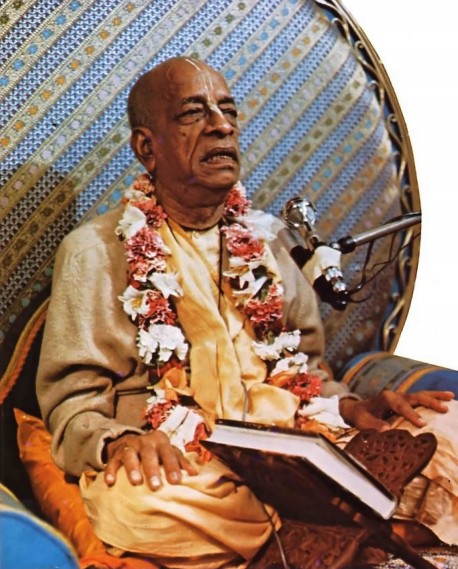 There is a misconception that the Krishna consciousness movement represents the Hindu religion. In act, however, Krishna consciousness is in no way a faith or religion that seeks to defeat other faiths or religions. Rather, it is an essential cultural movement for the entire human society and does not consider any particular sectarian faith. This cultural movement is especially meant to educate people in how they can love God.

Sometimes Indians both inside and outside of India think that we are preaching the Hindu religion, but actually we are not. One will not find the word “Hindu” in Bhagavad-gita. Indeed, there is no such word as “Hindu” in the entire Vedic literature. This word has been introduced by the Muslims from provinces next to India, such as Afghanistan, Baluchisthan and Persia. There is a river called “Sindhu” bordering the northwestern provinces of India, and since the Muslims there could not pronounce “Sindhu” properly, instead they called the river “Hindu,” and the inhabitants of this tract of land they called “Hindus.” In India, according to the Vedic language, the Europeans are called mlecchas or yavanas. Similarly, “Hindu” is a name given by the Muslims.

India’s actual culture is described in Bhagavad-gita, where it is stated that according to the different qualities or modes of nature, there are different types of men, who are generally classified into four social orders and four spiritual orders. This system of social and spiritual division is known as varnasrama-dharma. The four vamas, or social orders, are brahmana, ksatriya, vaisya and sudra. The four asramas, or spiritual orders, are brahmacarya, grhastha, vanaprastha and sannyasa. The varnasrama system is described in the Vedic scriptures known as the Puranas. The goal of this institution of Vedic culture is to educate every man for advancement in knowledge of Krishna, or God. That is the entire Vedic program.

In India, the varnasrama system has now been taken in a perverted way, and thus a man born in the family of a brahmana (the highest social order) claims that he should be accepted as a brahmana. But this claim is not accepted by the sastra (scripture). One’s forefather may have been a brahmana according to gotra, or the family hereditary order, but real varnasrama-dharma is based on the factual quality one has attained, regardless of birth or heredity. Therefore, we are not preaching the present-day system of the Hindus, especially those who are under the influence of Sankaracarya, for Sankaracarya taught that the Absolute Truth is impersonal and thus he indirectly denied the existence of God.

Sankaracarya’s mission was special; he appeared to reestablish the Vedic influence after the influence of Buddhism. Because Buddhism was patronized by Emperor Asoka, 2600 years ago the Buddhist religion practically pervaded all of India. According to the Vedic literature, Buddha is an incarnation of Krishna who had a special power and who appeared for a special purpose. His system of thought or faith was accepted widely, but Buddha rejected the authority of the Vedas. While Buddhism was spreading, the Vedic culture was stopped both in India and in other places. Therefore, since Sankaracarya’s only aim was to drive away Buddha’s system of philosophy, he introduced a system called Mayavada.

Strictly speaking, Mayavada philosophy is atheism, for it is a process in which one imagines that there is God. This Mayavada system of philosophy has been existing since time immemorial. The present Indian system of religion or culture is based on the Mayavada philosophy of Sankaracarya, which is a compromise with Buddhist philosophy. According to Mayavada philosophy there actually is no God, or if God exists, He is impersonal and all-pervading and can therefore be imagined in any form. This conclusion is not in accord with the Vedic literature. That literature names many demigods who are worshiped for different purposes, but in every case the Supreme Lord, the Personality of Godhead Visnu, is accepted as the supreme controller. That is real Vedic culture.

The philosophy of Krishna consciousness does not deny the existence of God and the demigods, but Mayavada philosophy denies both; it maintains that neither the demigods nor God exists. For the Mayavadis, ultimately all is zero. They say that one may imagine any authority—whether Visnu, Durga, Lord Siva or the sun-god—because these are the demigods generally worshiped in society. But the Mayavada philosophy does not in fact accept the existence of any of them. The Mayavadis say that because one cannot concentrate one’s mind on the impersonal Brahman, one may therefore imagine any of these forms. This is a new system, called pancopasana. It was introduced by Sankaracarya, but Bhagavad-gita does not teach such doctrines, and therefore they are not authoritative.

Bhagavad-gita accepts the existence of the demigods. The demigods are described in the Vedas, and one cannot deny their existence, but they are not to be understood or worshiped according to the way of Sankaracarya. The worship of demigods is rejected in Bhagavad-gita. The Gita clearly states:

“Those whose minds are distorted by material desires surrender unto demigods and follow the particular rules and regulations of worship according to their own natures.” (Bg. 7.20) Furthermore, in the Second Chapter of the Gita, verse 44, Lord Krishna states:

“In the minds of those who are too attached to sense enjoyment and material opulence, and who are bewildered by such things, the resolute determination for devotional service does not take place.” Those who are pursuing the various demigods have been described as hrta-jnanah, which means “those who have lost their senses.” That is also further explained in Bhagavad-gita, Chapter Seven, verse 23:

People should not think that we are preaching a system of religion. No. We are simply preaching how to love God. There are many theories about the existence of God. The atheist, for example, will never believe in God. Atheists like Professor Jacques Monod, who won the Nobel Prize, declare that everything is chance (a theory already put forward long ago by atheistic philosophers of India such as Carvaka). Then other philosophies, such as karma-mimamsa philosophy, accept that if one goes on doing his work nicely and honestly, automatically the result will come, without need for one to refer to God. For evidence, the proponents of such theories cite the argument that if one is diseased with an infection and takes medicine to counteract it, the disease will be neutralized. But our argument in this connection is that even if one gives a man the best medicine, he still may die. The results are not always predictable. Therefore, there is a higher authority, daiva-netrena, a supreme director. Otherwise, how is it that the son of a rich and pious man becomes a hippie in the street or that a man who works very hard and becomes rich is told by his doctor, “Now you may not eat any food, but only barley water”?

The karma-mimamsa theory holds that the world is going on without the supreme direction of God. Such philosophies say that everything takes place by lust (kama-haituka). By lust a man becomes attracted to a woman, and by chance there is sex, and the woman becomes pregnant. There is actually no plan to make the woman pregnant, but by a natural sequence when a man and a woman unite, a result is produced. The atheistic theory, which is described in the Sixteenth Chapter of Bhagavad-gita as asuric, or demoniac, is that actually everything is going on in this way, because of chance resulting from natural attraction. This demoniac theory supports the idea that if one wants to avoid children, he may use a contraceptive method.

Actually, however, there is a great plan for everything—the Vedic plan. The Vedic literature gives directions regarding how men and women should unite, how they should beget children, and what the purpose of sex life is. Krishna says in Bhagavad-gita that sex life sanctioned by the Vedic order, or sex life under the direction of the Vedic rules and regulations, is bona fide and is acceptable to Him. But chance sex life is not acceptable. If by chance one is sexually attracted and there are children, they are called varna-sankara, unwanted population. That is the way of the lower animals; it is not acceptable for humans. For humans, there is a plan. We cannot accept the theory that there is no plan for human life or that everything is born of chance and material necessity.

Sankaracarya’s theory that there is no God and that one can go on with his work and imagine God in any form just to keep peace and tranquility in society is also more or less based on this idea of chance and necessity. Our way, however, which is completely different, is based on authority. It is this divine varnasrama-dharma that Krishna recommends, not the caste system as it is understood today. This modern caste system is now condemned in India also, and it should be condemned, for the classification of different types of men according to birth is not the Vedic or divine caste system.

There are many classes of men in society—some men are engineers, some are medical practitioners, some are chemists, tradesmen, businessmen, and so on. These varieties of classes are not to be determined by birth, however, but by quality. No such thing as the caste-by-birth system is sanctioned by the Vedic literature, nor do we accept it. We have nothing to do with the caste system, which is also at present being rejected by the public in India. Rather, we give everyone the chance to become a brahmana and thus attain the highest status of life.

Because at the present moment there is a scarcity of brahmanas, spiritual guides, and ksatriyas, administrative men, and because the entire world is being ruled by sudras, or men of the manual laborer class, there are many discrepancies in society. It is to mitigate all these discrepancies that we have taken to this Krishna consciousness movement. If the brahmana class is actually reestablished, the other orders of social well-being will automatically follow, just as when the brain is perfectly in order, the other parts of the body, such as the arms, the belly and the legs, all act very nicely.

The ultimate goal of this movement is to educate people in how to love God. Caitanya Mahaprabhu approves the conclusion that the highest perfection of human life is to learn how to love God. The Krishna consciousness movement has nothing to do with the Hindu religion or any system of religion. No Christian gentleman will be interested in changing his faith from Christian to Hindu. Similarly, no Hindu gentleman of culture will be ready to change to the Christian faith. Such changing is for men who have no particular social status. But everyone will be interested in understanding the philosophy and science of God and taking it seriously. One should clearly understand that the Krishna consciousness movement is not preaching the so-called Hindu religion. We are giving a spiritual culture that can solve all the problems of life, and therefore it is being accepted all over the world.