Back to Godhead > ISKCON > Letters > What benefit will we derive from our son being a devotee?

What benefit will we derive from our son being a devotee?

The editors of Back to Godhead welcome correspondence pertaining to the subject matter of Krsna consciousness. All letters will be personally replied, and correspondence of special interest will be published regularly.

I hope you won’t think me impudent, but I’m sincerely interested to hear from you just what benefit you think my family will derive from Michael’s being a devotee that we could not know or have if he lived as a clean, helpful, religious and good person outside of the temple of devotees. You would be very helpful if you would tell me in your own words this answer. I have read much of your literature, but I lack the means to comprehend what you or any of the literature means when you say that my family will benefit.

I was rather shocked by an article I read in a magazine printed in San Diego concerning your organization. It said that a California publishing company was purchasing the rights to publish Back to Godhead magazine. This in effect means that somebody will be commercializing on what started out as an idealistic concept. To add insult to injury, this article told about a combine of marketing people who will be putting out articles of clothing to resemble “The Krsna Look,” just as in past years “The Hippie Look” or the “Nehru Look” were commercialized upon.

Looking forward to hearing from you soon.

Please accept my greetings. Hare Krsna. I have received your letter, and I am glad that you are interested in the potency of Krsna consciousness. Let me tell you that in the authorized Vedic scriptures it is said that if one becomes a staunch devotee of the Lord, he liberates generations of his parents who came before him, as well as those who will come after him in that family. You have asked how your son’s becoming a devotee will benefit you and your family. The answer is that each one of us after death will take another life according to the work we’ve done in this life. As long as we are not in pure love of God, which is very rare, we must come back to take another material body, and if we have committed sinful activities we may be forced to take a body of a lower animal, or, just as described in the Christian religion, we may have to go to a hellish planet. However, on the strength of his offspring’s being a pure devotee, a parent caught in a hellish condition will be liberated from suffering. In other words, your son can liberate any of his family members who are in a fallen or difficult position. Thus by the virtue of his being a devotee, the whole family can enter the spiritual world where life is eternal. That is the potency of Krsna consciousness. Aside from these eternal facts, you say that Michael may have become a clean, helpful, religious and good person living outside the temple of devotees. If you value these things—cleanliness, religion and morality—then why object that Michael has entered an institution where these principles are the very way of life and where he is assured of remaining always pure and religious because his activities, all day long, twenty-four hours a day, are in the service of God? It may be possible that outside of the association of devotees one can also be clean and religious, but it is more difficult due to contact with persons who are interested in illicit sex, intoxication and too much sense gratification and who are missing the real point of life—to realize God. In the association of devotees, Michael’s position as clean and religious is assured, and you should also feel assured of his safety and know that he will not fall prey to the immoral vices which are widespread in modern civilization. Moreover, he is doing the topmost welfare work in trying to teach others about their relationship with God. Krsna consciousness is not sectarian; it is an authorized science of God. This is understood by persons who know the real essence of religion. 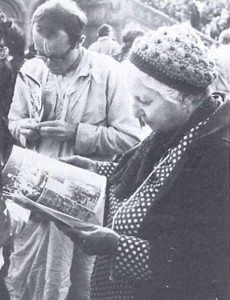 I do not know anything about the article in a San Diego magazine you referred to regarding our organization’s selling the rights to publish Back to Godhead But I do know that this is not a fact. I am an editor of Back to Godhead, and there is no such negotiation underway. Back to Godhead is completely controlled by the International Society for Krishna Consciousness just to present our philosophy to the mass of people who are in forgetfulness of Krsna. There is no plan underway to sell any rights. As for businessmen selling clothing resembling the clothing devotees wear, under the name of the “Krsna Look,” that may be. I do not know. If there is imitation, it is a sign that this movement is having an effect on the consciousness of the people. Now, if they will only start imitating by chanting Hare Krsna, Hare Krsna, Krsna Krsna, Hare Hare / Hare Rama, Hare Rama, Rama Rama, Hare Hare, then, even if they have impure motives, the face of the whole world will change, and there will be peace and real prosperity. I have no objection to your asking questions about Krsna consciousness, and if you wish to ask further please feel free to write.

Yours in the service of my spiritual master,
Satsvarupa dasa Adhikari Editor,
Back to Godhead

“When one is enlightened with the knowledge by which nescience is destroyed, then his knowledge reveals everything, as the sun lights up everything in the daytime.” Bhagavad-gita, 5.16