One Scripture For The Entire World 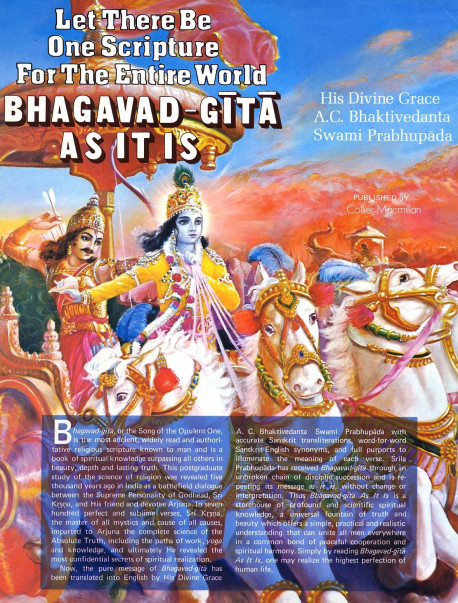 Bhagavad-gita, or the Song of the Opulent One, is the most ancient, widely read and authoritative religious scripture known to man and is a book of spiritual knowledge surpassing all others in beauty, depth and lasting truth. This postgraduate study of the science of religion was revealed five thousand years ago in India as a battlefield dialogue between the Supreme Personality of Godhead, Sri Krsna, and His friend and devotee Arjuna. In seven hundred perfect and sublime verses, Sri Krsna, the master of all mystics and cause of all causes, imparted to Arjuna the complete science of the Absolute Truth, including the paths of work, yoga and knowledge, and ultimately He revealed the most confidential secrets of spiritual realization.

Now, the pure message of Bhagavad-gita has been translated into English by His Divine Grace A.C. Bhaktivedanta Swami Prabhupada with accurate Sanskrit transliterations, word-for-word Sanskrit-English synonyms, and full purports to illuminate the meaning of each verse. Srila Prabhupada has received Bhagavad-gita through an unbroken chain of disciplic succession and is repeating its message as it is, without change or interpretation. Thus Bhagavad-gita As It Is is a storehous of profound and scientific spiritual knowledge, a universal fountain of truth and beauty which offers a simple, practical and realistic understanding that can unite all men everywhere in a common bond of peaceful cooperation and spiritual harmony. Simply by reading Bhagavad-gita As It is, one may realize the highest perfection of human life.