Back to Godhead > ~Featured~ > Association With Saintly Persons

Lord Caitanya says that one should always try to associate with saintly persons because if one establishes a proper association with a saintly person, even for a moment, he attains all perfection. Somehow or other, if one meets a saintly person and achieves his favor, then the whole mission of his human life is fulfilled. In our personal experience we have actual proof of this statement. Once we had the opportunity to meet Visnupada Sri Srimad Bhaktisiddhanta Sarasvati Gosvami Maharaja and on first sight he requested this humble self to preach his message in the Western countries. There was no preparation for this, but somehow or other he desired it, and by his grace we are now engaged in executing his order, which has given us a transcendental occupation and has saved and liberated us from the occupation of material activities. Thus it is actually a fact that if one meets a saintly person completely engaged in transcendental duties and achieves his favor, then one’s life mission becomes complete. What is not possible to achieve in thousands of lives can be achieved in one moment if there is an opportunity to meet a saintly person. It is therefore enjoined in Vedic literature that one should always try to associate with saintly persons and try to disassociate oneself from the common man because by one word of a saintly person one can be liberated from material entanglement. A saintly person has the power, because of his spiritual advancement, to give immediate liberation to the conditioned soul.

The system of disciplic succession is very important as a means of spiritual success. One becomes a mahat by the grace of his mahat spiritual master. If one takes shelter of the lotus feet of a great soul, there is every possibility of his also becoming a great soul. When Maharaja Dhruva asked Narada about his achievement of spiritual success, he replied to the king that spiritual success is not possible simply by following the rituals of religion or simply by converting oneself into a sannyasi or offering sacrifices as recommended in the scriptures. These methods are undoubtedly helpful for spiritual realization, but the real effect is brought about by the grace of a mahatma. In Visvanatha Cakravarti Thakur’s eight stanzas of prayer to the spiritual master, it is clearly stated that simply by satisfying the spiritual master one can achieve the supreme success in life, and in spite of executing all ritualistic performances, if one cannot satisfy the spiritual master, he has no access to spiritual perfection. 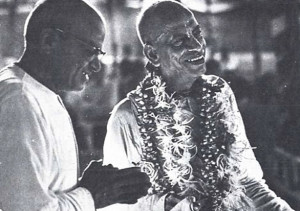 Because the common man is unable to control the senses and the mind, it is therefore his duty to seek the shelter of a great soul or a great devotee of the Lord and just try to please him. That will make his life perfect. A common man cannot rise to the topmost stage of spiritual perfection simply by following the rituals and religious principles. He has to take shelter of a bona fide spiritual master and work under his direction faithfully and sincerely; then he becomes perfect, without a doubt. 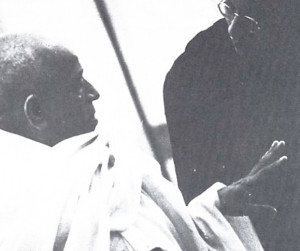