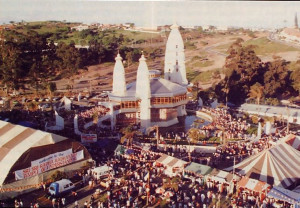 The new ISKCON temple in Natal attracts thousands of visitors for a festive three-day celebration and stands as a hope that South Africa’s violent racial problems can be solved by God consciousness.

Among the guest speakers at the colorful opening was Mangosuthu Buthelezi, chief minister of the Zulu tribal homeland and president of Inkatha, the largest black political group in South Africa. Buthelezi, though an opponent of apartheid, advocates peaceful negotiations between the country’s warring factions.

The ISKCON temple is a “triumph over terrible adversity,” Buthelezi said. “The temple’s magnificence and spirituality could not be here if racial hatred had already dehumanized us. Sharing across political and racial barriers was made possible by the great religions of the world. There would be no great cultures if there were no great religions.” 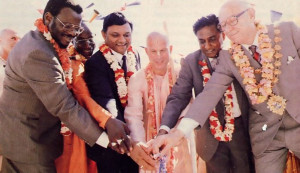 Feeling the happiness of the spirit of brotherhood after cutting the ribbon and opening the temple are the guests of honor and the ISKCON hosts: Mangosuthu Buthelezi, Srila Bhaktitirtha Swami, Amichand Rajbansi, Srila Bhagavan Goswami, J. N. Reddy, and Stan Lange.

The temple is over 100 feet high and is surrounded by a moat and a lovely park of gardens, fountains, lawns, walkways, and exotic imported plants. The interior decorations include 557 chandeliers, 45 murals, 6 tons of Portuguese marble, 1,264 square feet of mirrors, and 16,114 stainless steel tiles. The temple also contains a 700-seat auditorium.

Rajarama dasa, a devotee-architect, designed the temple according to geometrical formulas found in a classical Sanskrit text on architecture. The devotees started their own construction company and did most of the construction work.

“Krsna consciousness brings people together in a way that no other church or organization could,” Srila Bhaktitirtha said in his opening address. “The devotees in South Africa have vividly demonstrated that all people can live together peacefully through spiritual understanding.”

That statement was confirmed by J. N. Reddy, a leading member of the Indian parliament. “This message is one the devotees are showing by their example. It applies not only to South Africa but to the whole world,” Reddy said.

Stan Lange, the mayor of Durban, and Amichand Rajbansi, chief minister of the House of Delegates, were also honored guests. Mr. Rajbansi predicted that the temple would soon become a major tourist attraction in South Africa.