Now the people in this politically tense
city have something to sing about.

In its mission to spread pure Vaisnava dharma, service to God, around the globe, the International Society for Krishna Consciousness (ISKCON) is faced with the challenge of establishing unity in diversity: One absolute spiritual principle must be adapted to the various social and cultural conditions of this relative world.

The one absolute spiritual principle is the transcendental teaching of Sri Caitanya Mahaprabhu, the Supreme Personality of Godhead Himself in a golden form, who incarnated five hundred years ago in West Bengal, India. Lord Caitanya personally descended to teach Krsna consciousness in its most essential and accessible form: hari-nama sankirtana, the congregational chanting of the holy names of God.

Lord Caitanya’s sankirtana movement attracted literally millions of followers from all corners of the Indian subcontinent. They were caught up in the waves of ecstatic bliss generated by this simple process of mantra yoga, which enables one to transcend the limitations of the fragile human condition and link one’s consciousness with the Supreme, ending the cycle of repeated birth and death.

But Lord Caitanya’s plan for delivering souls from the bondage of the bodily conception was not limited to the predominantly Hindu culture of South Asia. In the Caitanya-bhagavata, a sixteenth-century classic on Lord Caitanya’s life and teachings, the Lord clearly prophesies that the Chanting of His holy name will be heard in every town and village of the entire world. Fulfilling that prophecy was the main goal of His Divine Grace A.C. Bhaktivedanta Swami Prabhupada when he founded the Krsna consciousness Society in New York in 1966.

Srila Prabhupada encouraged the Western disciples to use their native entrepreneurial spirit to transport the sankirtana mission across the cultural divide separating the Occident from the Orient. That’s why sankirtana has taken so many forms in the modern world—from the distribution of Bhagavad-gita in international airports to interisland cruises by ISKCON preachers in Hawaii, from underground study cells of Srila Prabhupada’s teachings in the Soviet Union to construction of a “spiritual Disneyland” in West Virginia. 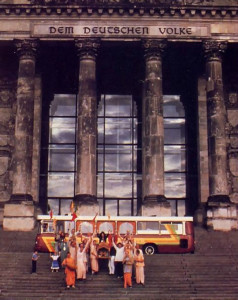 The Spiritual Skyliner, a custom-made mobile temple, makes tours into the city from West Germany; here it’s parked at the Reichstag Museum

In West Germany, devotees have evolved a preaching strategy adapted from the nama-hatta program established by Srila Bhaktivinoda Thakura in India during the last century. The aim of nama-hatta (“the marketplace of the holy name”) is to add Krsna consciousness to the lives of ordinary people from all walks of life, without demanding that they undergo a radical break from society. In other words, a nama-hatti transforms his home into a temple, practices Krsna consciousness with his family, and attempts to interest others in Krsna consciousness through whatever social and occupational channels he has access to.

The German nama-hatta encompasses centers in Hamburg, Flensburg, Regensburg, and Berlin. These centers, which supplement the outreach activities of Germany’s four official ISKCON centers, are periodically visited by ISKCON preachers, who encourage the nama-hattis in their own practice of Krsna consciousness and assist them in expanding the sankirtana mission in their local area.

One such party of traveling preachers is headed by Avinasacandra dasa, a disciple of Srila Prabhupada’s who joined ISKCON when it was first established in Germany in the late sixties. Avinasacandra and eight other devotees converted a bus into a traveling temple, complete with Sri Sri Gaura-Nitai Deities, and christened it The Spiritual Skyliner. 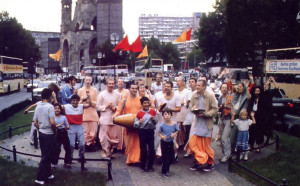 Among the most exciting tours are the visits to Berlin, which entail a ninety-mile journey from the eastern border of West Germany through the communist German Democratic Republic. Berlin, known by the European youth subculture as “Wall City,” is a burgeoning neo-Bohemia that some social commentators have compared to San Francisco in its hippie heyday. At any rate, the large concentration of young people makes Berlin a fruitful ground for spreading Krsna consciousness.

From 1871 to 1945, during its Imperial, Weimar, and Nazi periods, Berlin was the capital of the German Reich. Today the city is truly an international metropolis where the principal political currents of modern Western society converge. Since the end of the Second World War, Berlin has been administered by the Allied occupational authorities (the United States, the Soviet Union, Great Britain, and France). Their presence has exerted no mean influence upon the local German kultur. The result has made the city a trendy tourist attraction for everyone.

Berlin’s best-known tourist magnet, of course, is the infamous Berlin Wall, built by the Communists in 1961 to prevent the 1,000,000 Berliners living in the Russian zone from entering capitalistic West Berlin (population: 2,000,000). Zigzagging along its 100-mile path, the wall cuts through parks, squares, cemeteries, waterways, and 62 city streets. It is guarded around the clock by 14,000 soldiers manning 252 watchtowers, 136 bunkers, and 7 crossing points. Since its construction, more than 70 East Germans have been killed trying to escape to the West. 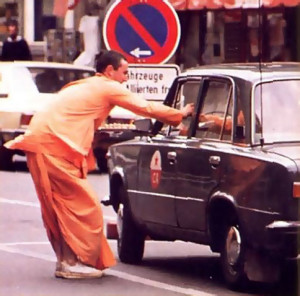 A devotee hands a sweet to a member of the Soviet military mission who is returning to East Berlin after an official visit to the American sector.

The nama-hatta center is within sight of the Berlin Wall, just two blocks from Checkpoint Charlie, where, on October 25, 1961, a tank-to-tank showdown between Russian and American troops came within a hairsbreadth of starting World War III. The center is permanently staffed by two enthusiastic aspiring devotees, Udo and Dirk, and serves a congregation of some thirty others. Every Sunday the nama-hattis hold a feast that attracts as many as a hundred guests. And when the devotees from West Germany visit, everyone takes to the streets for hari-nama sankirtana.

Avinasacandra describes his efforts to bring the holy name to Wall City: “West Berlin is at once a Weltstadt [world city] and an isolated island. Because of its insularity, it is not hard to make an impact here. We simply park the bus at a busy location—for instance, in front of the Kaiser Wilhelm Memorial Church, in the center of town—and go out on processional kirtana. If you do this every day for a week or two, the whole city will be talking about it for a month afterwards. Sometimes a radio reporter will come to the bus for an interview. We have a video player running constantly in the bus window, showing Krsna conscious films, and we distribute prasadam sweets and magazines to the people gathered outside. And, of course, the devotees hand out invitations to the Sunday feast held at the center.

“Berlin is very analogous to the material world. It’s like a prison—a very comfortable prison, no doubt, featuring a grand array of sense pleasures—but on all sides it is bordered by gloom. People here never shake off the nagging fear that they are trapped and that at any moment Russians may come bursting through the wall with their tanks to break up the party.

“Similarly, everybody everywhere is now trapped within the four walls of birth, death, disease, and old age. We may try to make the best out of it by doing the things West Berliners have become world famous for—eating opulently, drinking, taking drugs, gambling, engaging in illicit sex of all kinds, living for the moment in grand style—but that’s just illusory escapism. If one really wants to escape he’s got to get beyond those walls. And that’s why we chant Hare Krsna. It elevates the consciousness to the transcendental realm of Krsna, which is eternally full of knowledge and bliss.”

Berlin, which for the last one hundred years has been the site of many a world-shaking event, is now a world stage for nama-sankirtana. The much-needed balm of the holy name of Krsna is the only medicine that can heal the ills of a civilization suffering from a dangerous excess of materialism.