Death and Dying — The Vedic Observer 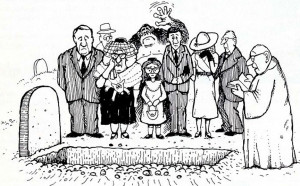 For thirteen years at the Gorilla Foundation in Woodside, California, a developmental psychologist has been teaching sign language to Koko, a female gorilla. Although Koko shows remarkably human emotions and intelligence, her psychologist says she’s an average gorilla at best.

Koko’s psychologist first tried teaching her the same hand signs used by the deaf, but in time Koko began inventing her own sign language. For example, when she was shown a wedding ring, she responded by combining the sign for “finger” with the sign for “bracelet.” Today her working vocabulary is about five hundred words. She initiates about half of her conversations, asks questions, and will even deny things. She also talks to other animals.

The most interesting thing about Koko, however, is her communication of certain abstract concepts, like old age and death. She cried when her pet kitten (which she named All Ball) died. Previously, her keepers phrased questions to her about death: “Why do gorillas die?” they asked, She sighed in return, “Trouble, old.” When asked, “Where do gorillas go when they die?” She answered, “Comfortable hole,” blowing a kiss goodbye. Her psychologist was puzzled where she got such a concept, but found a confirmed observation of a group of gorillas who came upon a dead crow, dug a hole, placed the corpse within, and covered it with dirt.

Perhaps this is the most important discovery about Koko: a gorilla can know as much about death as many people do. A person is buried, and that’s about it—comfortably “resting in peace.” It’s amazing that a civilization as materially advanced as ours officially teaches no more about death than what an average gorilla knows!

The Brhad-aranyaka Upanisad states, yo va etad aksaram gargy aviditvasmal lokat praiti sa krpanah: “He is a miserly man who does not solve the problems of life as a human being and who thus quits his body like the animals, without understanding the science of self-realization.” Krpana means “a miserly person,” one who hoards valuable assets. In other words, the real value of human life escapes the person who neglects self-realization.

Who am I? What is the purpose of life? Why do I have to die? Where am I going? These questions signal the start of self-realization. Too often they’re postponed till the last bewildering moment of death.

Such procrastination is due to attachment. To be attached to the body is natural, because we are living in it. But without proper spiritual education, we tend to equate the body with ourselves. We assume a bodily identity, an identity we constantly reinforce by innumerable forms of sense gratification. As we grow older, our identity expands with our attachments—from our bodies to our relatives, friends, community, race, nation, and humanity.

Affection for these things is natural, but in the life of one devoid of self-realization, that affection becomes the cause of miserly existence. Thousands of years ago, on the Battlefield of Kuruksetra, Arjuna faced the perplexity of material identity and affection by consulting Lord Krsna. Thus, by Krsna’s transcendental advice, Arjuna was able to overcome his attachments.

We should also take advantage of Lord Krsna’s teachings in the Bhagavad-gita. After all, our attachments, be they spiritual or material, are based upon our education.

The word education comes from the Latin educare, which means “to bring” or “to call” out (what is already there). Koko’s education brought out her realization—which was pretty good for a gorilla—that life ends with the body. But should an intelligent human being be satisfied with a comfortable hole in the ground at the end of life? The opposite of the krpana (miser) mentioned above is the brahmana, or one who by developed intelligence is able to use the human body for successfully solving the problems of life. That is the special prerogative of humans over gorillas.

A Thin Layer Of Fear 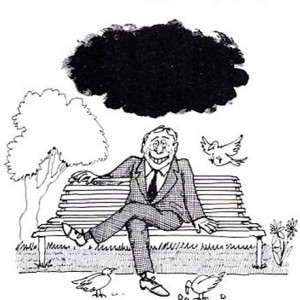 “It’s really prolonged happiness I’m suspicious of,” relates Dustin Hoffman. “Momentary happiness doesn’t scare me, but as soon as things are really good, I always have the feeling the rug is about to be pulled out from under me, and I put up a guard. On a beautiful day in California, there’s always a thin layer of smog. With me, there’s always a thin layer of fear.”

For those languishing on the lower rungs of the socioeconomic ladder, a kind of constant fearfulness seems natural. After all, when your assets are few, it takes a very small blow to demolish everything you have. For such people, fear is never a distant threat, as they struggle to pay the bills, feed the kids, and hold the marriage together. The hope is that someday they will achieve a margin of security to cushion them from the threat of disaster. In that peaceful and happy state, they believe, the constant gnaw of anxiety will be silenced by the security of material prosperity.

It is disheartening, then, to hear such sobering testimonies from the top. Nevertheless, a number of tabloids appear to be dedicated to exposing the pain behind the painted smiles—broken homes, enslaving drug habits, suicides. Those who are living the American dream most fully are discovering the very fragile and elusive nature of that dream.

Mr. Hoffman continues, “It’s the old too-good-to-be-true business that never leaves me. A big wave of happiness surges over me, like a shaft of light from heaven, and I hear a voice behind it saying, ‘Are you sure there isn’t an earthquake coming?'”

Material acquisitions do not protect us from anxiety. The paradox is, the more you acquire, the more you stand to lose. With each new embellishment a fresh attachment thrusts forward in our hearts, threatening to slice us with pain if we lose the treasured object. We wonder how we will live without the house in the country, the support of our spouse, or the glory of our careers. These things are heady fuel for fear, as the unwitting possessor grows more and more miserable in their midst.

Fear and worry are actually an intelligent response to our increasing load of material attachments. Only a fool proceeds merrily along, oblivious to his own vulnerability. The unhappy truth is that nothing in the material world lasts forever; we will lose all those things so dear to our hearts. An introspective person observes this and becomes alarmed at the depth of his own materialistic entanglement.

The material fever can be extinguished through spiritual enlightenment. To hear of the rich variegations of spiritual happiness and to become eager for such a life automatically subdues materialistic longings. As spiritual entities we crave tranquillity and permanence, and these are possible only when the mind is firmly transcendental to material distractions. The spirit soul never dies, so spiritual pleasure isn’t interrupted by the death of the body.

Birth and death apply to one’s embodiment in the material world. Fear is due to worrying about the future. A person in Krsna consciousness has no fear because by his activities he is sure to go back to the spiritual sky, back home, back to Godhead. Therefore his future is very bright. Others, however, do not know what their future holds; they have no knowledge of what the next life holds. So they are therefore in constant anxiety. If we want to get free from anxiety, then the best course is to understand Krsna and be always situated in Krsna consciousness. In that way we will be free from all fear. [Bg. 10.5, purport]

Awareness of an underlying tearfulness is symptomatic of a person intelligent enough to perceive his own diseased condition. This is a fortunate position for spiritual advancement, which is the real wealth of life. Regardless of social status, anyone can achieve the highest success in life. We simply have to let go and reach for it.

In the spring of 1975 an attractive young woman joined some of her friends at a bar to share a few drinks. It was to become a fateful occasion for the entire world. Earlier that evening she had taken several tranquilizers, and as the alcohol mixed with the chemicals in her body, the combination proved deadly. On that evening, April 14, 1975, twenty-one-year-old Karen Ann Quinlan suddenly fell unconscious.

She was rushed to the hospital, where just before midnight she lapsed into a coma. For the next three months she lingered on in a bare semblance of existence while her anguished parents watched. Recovery appeared hopeless. The Quinlans requested that Karen be removed from the respirator machine, which seemed to maintain the life in her wasting body. They felt that she deserved “to die with dignity.” The doctors and administrators at the hospital, however, disagreed. “We don’t kill people here,” they responded.

In what was to become one of the most complicated legal battles of the decade, the Quinlans argued that to maintain Karen’s body “after the dignity, beauty, promise, and meaning of earthly life have vanished” was cruel and unusual punishment. The doctors countered that no court could determine that Karen would, without a doubt, never recover. While the world focused on the emotion-charged debate, Karen Ann lay quietly on her bed, oblivious to the furor, her body curling into the grotesque fetal position that characterizes “the chronic vegetative state.”

Finally, the Quinlans won their case on appeal to the New Jersey Supreme Court. On May 22, 1976, the respirator was disconnected. No one could predict if Karen Quinlan would survive the night or if she would linger on for several more months. She continued to live, never regaining consciousness, for more than nine years.

When the tiny spirit soul enters the womb of its mother-to-be at the time of conception, it takes up residence. How long that residence will last—that particular individual’s life span—is predetermined by the laws of karma. These laws dictate the conditions of a specific individual’s birth, the course of his life, and the manner of his death. By the time of birth, all that is left for the individual is the role and the script; it is too late to change the final scene. There are numerous examples of inexplicably brief lives, of freak deaths that occur with no apparent cause. And there are also miraculous recoveries, survivals despite insurmountable odds. How many doctors have witnessed one patient slip away despite impeccable medical attention while another survives despite the worst of circumstances?

Sometimes we credit a person with a great “will to live.” But the tenacious die-hard does die, nevertheless. It’s not on the merit of personal determination that one is able to maintain his life; ultimately you must be blessed with divine sanction.

This is painfully evident in the story of Karen Ann Quinlan. Certainly in many respects her life ended on April 14, 1975, yet she “lived” for ten more years. The mysterious factor that defies the limits of our logical reasoning is the hand of Krsna. Lord Krsna Himself proclaims, “I am all-devouring death.” In this connection. His Divine Grace A.C. Bhaktivedanta Swami Prabhupada elaborates, “As soon as a man is born, he dies at every moment. Thus death is devouring every living entity at every moment, but the last stroke is called death itself. That death is Krsna” (Bg. 10.34, purport).

The irony of Karen Ann Quinlan’s agonizing demise overshadows her brief yet vivacious life. How she lived was forgotten as the world debated how she would die. But in the end the decision wasn’t her parents’ or the doctors’ or judges’, but the Supreme Lord’s, reminding us once again who is in charge and who makes the final judgment.