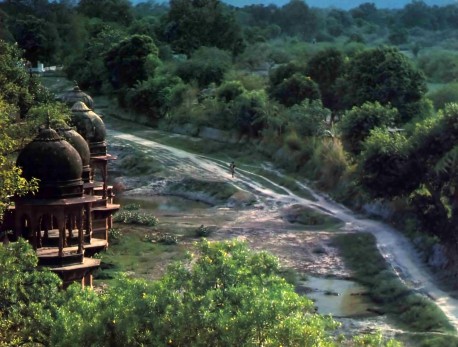 A view of the parikrama, or path of pilgrims, that encircles Vrindavan. Pure devotees who circumambulate Vrindavan always remember Krishna in
transcendental pleasure. 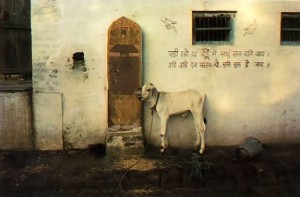 On a Side Street in Vrindavan

Ninety miles southeast of New Delhi, India, is a railway station known as Mathura. From Mathura, a bumpy seven-mile ride by horse-cart brings one to a unique town called Vrindavan. This simple village is unlike all other places in the world, for when Lord Krishna, the Supreme Godhead, comes to earth with His associates to display His pastimes, He comes only to Vrindavan. Indeed, Krishna never leaves Vrindavan–and, by His grace, pure devotees can appreciate the Lord’s presence in Vrindavan even today. 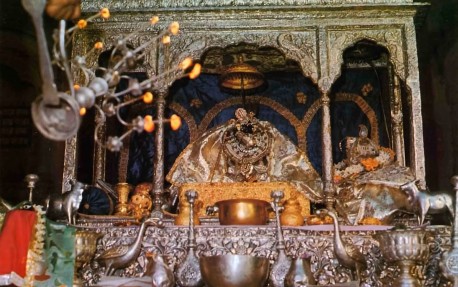 Arati, a ceremony of worship, in the temple of Radha·ramana. This temple was established by Srila Gopala Bhatta Gosvami. 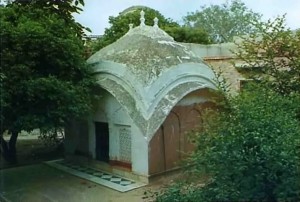 After the onset of Kali-yuga, the present Age of Quarrel, the importance of Vrindavan was forgotten until 450 years ago, when Lord Caitanya Mahaprabhu, the original father of the Krishna consciousness movement, sent two of His chief disciples, Rupa Gosvami and Sanatana Gosvami, to excavate the sites in Vrindavan where Krishna had performed His pastimes. These Gosvamis, assisted by Srila Raghunatha Bhatta Gosvami, Jiva Gosvami, Gopala Bhatta Gosvami and Raghunatha dasa Gosvami, established important temples in Vrindavan and wrote books to explain the science of devotional service. They scrutinizingly studied all the revealed scriptures with the aim of establishing eternal religious principles for the benefit of all human beings. The Gosvamis not only explained devotional service but also taught by their own example how to develop pure love for Krishna. 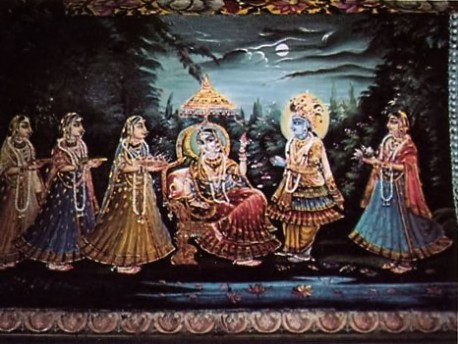 This painting from a temple in Seva-kunja depicts Lord Krishna and His eternal consort, Srimati Radharani, with Their loving attendants, the gopls. 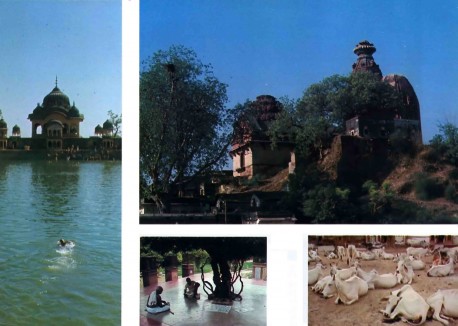 Above: A view of Srila Sanatana Gosvamis Madana-mohana temple, one of the oldest temples in Vrindavan. The tiny village of Vrindavan has more than 5,000 Krishna conscious temples, both large and small.
Far left: A bathing place near Vrindavan’s Govardhana Hill. The Vedic scriptures relate that Lord Krishna once lifted this hill as an umbrella to protect His devotees in Vrindavan from a devastating thunderstorm.
Left: In Seva-kunja, the holy place where Lord Krishna performed His celebrated rasa dance, devotees absorb themselves in thoughts of Krishna’s pastimes. 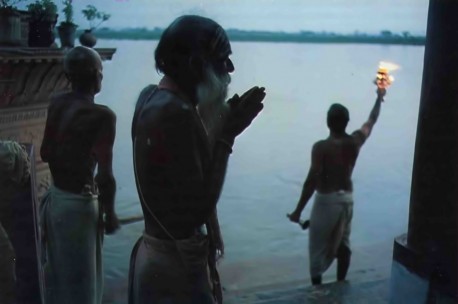 Arati at Kesi-ghata, a bathing place on the River Yamuna. Srila Rupa Gosvami has written: “I remember the Lord standing by the banks of the Yamuna, so beautiful amidst the kadamba trees, where many birds are chirping in the gardens. And these impressions are always giving me transcendental realization of beauty and bliss.” 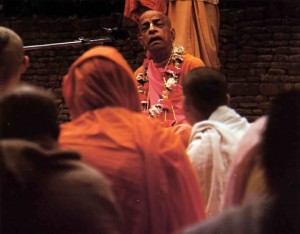 In the courtyard of the Radha Damodara temple, Srila Prabhupada teaches his disciples about Krishna, the Absolute Truth.

His Divine Grace A.C. Bhaktivedanta Swami Prabhupada explains that the purpose of going to a holy place like Vrindavan is to learn how to love Krishna. Love for Krishna is dormant within every living being, but in material consciousness one forgets Krishna and thus misdirects one’s love. Therefore the Vedic literature Rukmini that one approach a spiritual master and learn from him how to revive one’s Krishna consciousness. 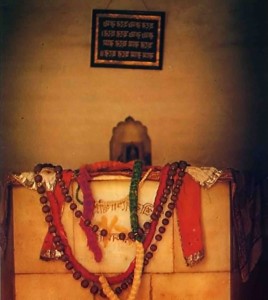 The beads on which Srila Rupa Gosvami chanted the Hare Krishna mantra are on view in his samadhi, or tomb.

Nature’s greatest gift to a living being is the human form of life, for only in the human form is one able to inquire about the Absolute Truth and thus attain true happiness. Human intelligence is meant for such inquiry. According to Srimad-Bhagavatam, therefore, “A human being who goes to a sacred place simply to bathe in a holy river and not to meet men of spiritual wisdom should be considered no better than a cow or an ass.”

The International Society for Krishna Consciousness has therefore built an International Center in Vrindavan so that people from all over the world may come to Vrindavan to learn how to love Krishna and thus fulfill the purpose of human life. 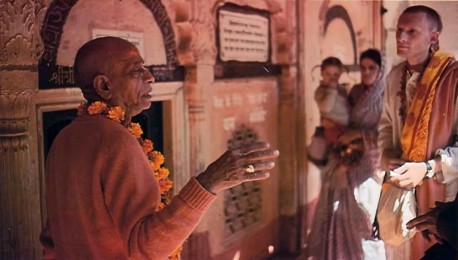 Srila Prabhupada guides disciples on a tour of the Radha·Damodara temple. Srila Prabhupada is following directly in the footsteps of the six Gosvamis of Vrindavan by spreading their teachings all over the world. 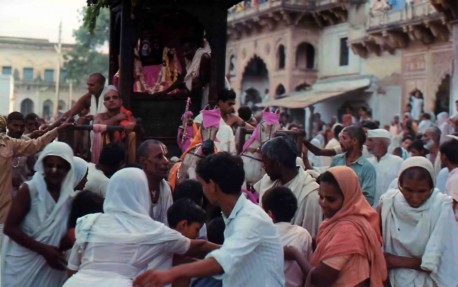 The residents of Vrindavan celebrate a festival in honor of Lord Krishna.

In The Nectar of Devotion, a summary study of Srila Rupa Gosvamis Bhakti-rasamrta-sindhu, Srila Prabhupada writes: “Rupa Gosvami has stated that. . . five kinds of devotional activities-namely, residing in Vrindavan, worshiping the Deity of the Lord, reciting Srimad-Bhagavatam, serving a devotee, and chanting the Hare Krishna mantra-are so potent that a small attachment for any one of these five items can arouse devotional ecstasy even in a neophyte.” Krishna consciousness, therefore, offers a scientific program for reviving one’s original blissful nature. We humbly request our readers to understand and adopt this program and thus learn how to love Krishna, the Supreme Lord. One who follows this path can purify his vision. Thus he will be able to see Lord Krishna in Vrindavan, and see Vrindavan everywhere. 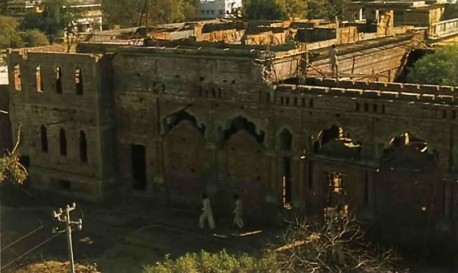 Construction at the site of the Krishna Balarama temple of ISKCON’s International Center in Vrindavan, before its opening in August of 1974. 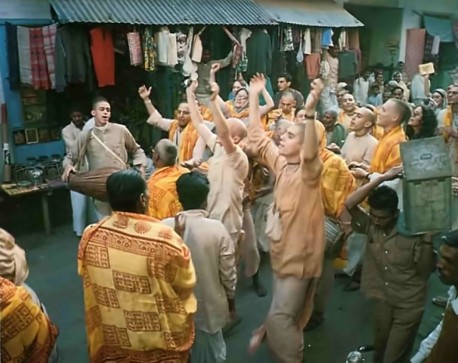 ISKCON devotees hold sankirtana, congregational chanting of the Hare Krishna mantra, in the streets of Vrindavan.

Visakha-devi dasi graduated from Rochester Institute of Technology in 1970 and then wrote a technical book on the art of close-up photography. She and Yadubara dasa, her husband, also a professional photographer joined ISKCON in 1971 while shooting assignments in India. They are now traveling around the world making documentary films about the Krishna consciousness movement.