In New Orleans And Around the World… 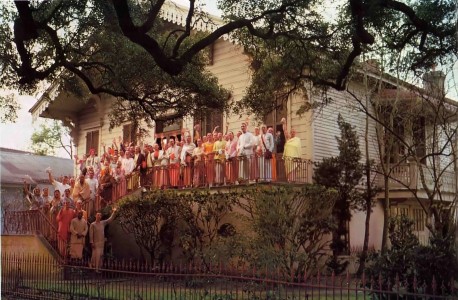 Devotees at the Krishna consciousness center in New Orleans, Louisiana.

Krishna consciousness is everywhere because Krishna is everywhere. Krishna is the Supreme Lord, the Personality of Godhead. He lives far away, in the spiritual world, but He also lives within the heart of every living being. Thus no one can be farther from us than Krishna–and no one can be closer.

His Divine Grace A.C. Bhaktivedanta Swami Prabhupada has established more than eighty centers of Krishna consciousness around the world. In these centers, Srila Prabhupada’s disciples learn and teach others the techniques for becoming Krishna conscious, as taught in ancient Vedic scriptures such as Bhagavad-gita and Srimad-Bhagavatam. The most important of these techniques is the chanting of the holy names of God, as found in the mantra Hare Krishna, Hare Krishna, Krishna Krishna, Hare Hare/ Hare Rama, Hare Rama, Rama Rama, Hare Hare.

We invite you to learn more about Krishna and our relationship with Him by chanting the Hare Krishna mantra and by reading Back to Godhead, which explains the Krishna conscious philosophy and tells about the Hare Krishna movement. We also invite you to visit one of the Krishna consciousness centers–anywhere in the world–and thus come closer to Krishna, the Supreme Personality of Godhead.

One Response to In New Orleans And Around the World…