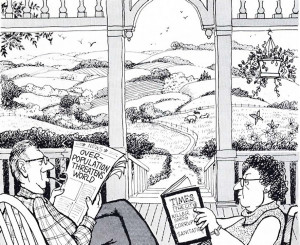 Social scientists from around the world gathered in Mexico City last August to discuss the alarming growth of the world’s population. The conference, sponsored by the United Nations, couldn’t have met in a more appropriate place. With a population estimated to reach eighteen million by 1985, Mexico City will soon surpass Tokyo as the world’s largest urban center.

Mexico City’s problems are similar to those found in other major urban areas. Three million cars, seven thousand diesel buses, and 130,000 factories spew eleven thousand tons of pollutants into the air daily. Some estimates put unemployment at forty percent, and burglary and theft have risen thirty-five percent in the past year.

But these problems, experts say, are only symptomatic. The one problem that underlies all the others—not only in Mexico City but in urban areas around the world—is overpopulation. Mexico City, from a count of two million just after World War II, grew to nine million by 1970, and city officials predict thirty million by the year 2000. And by 2025, world population, which now stands at 4.7 billion, will reach 8.3 billion.

How will we ever feed, clothe, house, and educate all those people? The conclusion of most social scientists and economists is that we can’t and that the solution to overpopulation is family planning, or (less euphemistically) abortion or contraception.

But a Krsna conscious person will take issue not only with this “solution”—the mass murder of millions of unborn children each year—but also with the almost universally held assumption that population growth is the number-one culprit, and even with the assumption it’s a culprit at all.

The Vedic literature asserts that Lord Krsna, the eternal Supreme Person, has been supplying the necessities of life to all living beings since the beginning of creation. All living things are part and parcel of Krsna; they are His children. And since He is all-powerful, He can support an unlimited number of children.

Sound simplistic? Fanatically religious? Consider the facts. Even though many of the planet’s five billion inhabitants are hungry, there is enough food to feed everyone. A report published by the Economics Research Institute shows that only a fraction of the annual U.S. food surpluses could end hunger in all the world’s poorest nations. Even though the U.S. government—like many other governments—pays farmers to restrict the size of their crops, still U.S. surpluses are more than sufficient to end starvation.

Furthermore, hundreds of millions of acres on this planet are used to grow non-essential crops like coffee and tobacco. Millions more are used to grow the grains and other products needed to produce meat, wine, beer, and liquor. Coffee, tobacco, meat, and liquor are not necessities. Human society is at present addicted to these things because of a lack of Krsna consciousness.

Another problem supposedly related to overpopulation is unemployment. Mexico City’s unemployment rate is already soaring, and with thousands of peasants pouring in from the countryside each week, the problem grows worse.

But why not pin the blame for hunger and unemployment on mismanagement rather than on population growth? By Krsna’s arrangement a man can live comfortably by cultivating an acre or two of land and keeping a cow. If the energy tied up in Mexico City’s 130,000 factories were put into irrigating the Mexican countryside and into intelligently dividing the land. Mexico’s unemployment problem would cease to exist. And the labor force would have some independence and dignity, rather than having to depend on the ups and downs of an industrial economy.

Another related problem in Mexico City is pollution. In addition to air pollution, the city produces fourteen thousand tons of garbage a day, only eight thousand of which is processed. This too, experts say, is caused by too many people living too close together.

That may be. But why should millions crowd into a few square miles when they can live much more sanely and comfortably in the country? Population alone doesn’t produce thousands of tons of waste paper, waste metal, waste plastic, and so on. Nor are these wastes the product of man’s only essential occupation: agriculture. Waste—not only metal and plastic, but millions of tons of deadly chemicals—is primarily a product of modern industrial economics. The same industries that make a few people wealthy and provide a few more with jobs also dump their wastes at our cities’ doorsteps.

So it is not at all simplistic or fanatical to say that Krsna can provide more than enough for everyone, now and in the future. It is a fact. There is enough for everyone now, and by Krsna’s grace, the earth has the potential to provide for many billions more. There is no such thing as overpopulation. The world is suffering only from a lack of competent, God conscious leadership. 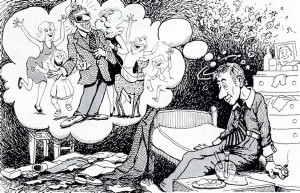 “The Use of Cocaine Is Escalating With Frightening Rapidity,” screamed a recent eight-column headline in The New York Times. The article went on to say an estimated twenty-five million Americans have tried the drug, and five to six million use it every month. Perhaps 1.5 million have a serious cocaine dependency. And five thousand people try it for the first time every day. As New York State Senator Roy M. Goodman recently said, “[Cocaine use] must now be viewed as an epidemic threat to society.”

Cocaine is the most potent of all natural stimulants. A person high on the drug feels smarter and sexier, more alive and competent, than ever before. “With cocaine,” explained one user, “you’re indestructible, perfect, the giant of your dreams.” Another addict, who squandered his inheritance and nearly destroyed the delicate membranes in his nose, said he nevertheless “felt powerful, in control. Cocaine is ego food. It feeds the ego like nothing I’ve ever seen in my life. “The illusion of infallibility and indestructibility lasts for maybe twenty or thirty minutes, and then there’s the inevitable crash. Anxiety and, for the heavily addicted, paranoia close in, followed by the frantic search for more cocaine—or for barbiturates or heroin to dull the anguish.

Recognizing the threat that burgeoning cocaine abuse poses for American society, President Reagan has mounted a massive law-enforcement effort in South Florida, where most of the potent white powder enters the country from Colombia. But the profits are too great ($20 to $30 billion a year) and the organized criminals too wily for the antismuggling effort. As one veteran official from the federal Drug Enforcement Administration said, “The only way to stop the [cocaine] trade is to stop the production or stop the demand. And we can’t stop the source.”

Let’s take a look at the demand aspect. Here’s where the teachings of Krsna consciousness can help.

The first principle of Krsna consciousness, as Lord Krsna Himself teaches in the Bhagavad-gita, is the radical dichotomy between the soul and the body. The soul (the self, or jivatma) is pure spirit, an infinitesimal particle of consciousness, whereas the body is nothing but a hunk of lifeless matter that seems alive only because the soul is within it. The soul is unborn and eternal, unchanging and indestructible—the body is impermanent and always in flux.

Along with this concept of the eternal soul in an ephemeral body, Krsna naturally teaches the concept of reincarnation: “As the embodied soul continuously passes, in this body, from boyhood to youth to old age, the soul similarly passes into another body at death” (Bg. 2.13). Like an old coat, the old and decrepit body is discarded when we die, and the soul enters a new body to repeat the process of birth, growth, activity, aging, disease, and death. Each of us—each soul—has gone through this trauma of reincarnation countless times, in countless varieties of bodies, and now in this human form, says Krsna, we should end this painful cycle. Originally possessed of eternal life and limitless bliss and knowledge, the glorious spirit soul is not meant for suffering ignominiously in this world of matter. He’s meant for the spiritual world, the kingdom of God.

The problem, of course, is that we’ve forgotten all this. Instead of identifying ourselves as spirit souls, particles of the Supreme Spirit—God, or Krsna—we identify ourselves with our material bodies and their extensions: family, community. nation, race, religion, social station, and soon. And this false identification, known in Sanskrit as ahankara, “the false ego,” keeps us in ignorance and tightly bound up in the complexities of the material world.

The science of Krsna consciousness is the perfect antidote for the false ego. Instead of serving the endless demands of the body for pleasure, we learn to serve the Lord and His representative, the guru. Instead of surrendering to our bad habits and self-destructive addictions, we follow four regulative principles that prohibit not only intoxication but also illicit sex, gambling, and meat-eating. By following these principles of service and self-restraint, we transform the false ego into the real ego—the understanding that we are each an eternal loving servant of Lord Krsna.

Now, in recalling our discussion of cocaine’s effects, we can see that the drug greatly strengthens the false ego. Indeed, it is certified “ego food”! In a remarkable section of the Bhagavad-gita, Lord Krsna gives a perfect description of how the cocaine addict thinks: ‘”I am the lord of everything. I am the enjoyer. I am perfect, powerful, and happy. . . . There is no one so powerful and happy as I am.’ In this way such persons are deluded by ignorance. Perplexed by various anxieties and bound by a network of illusions, they become too strongly attached to sense enjoyment and fall down into hell.”

Who is Krsna speaking of in this passage? The demons, the enemies of God. The hard fact is that the more we try to enjoy intense sensual pleasures—whether through drugs or through sex or by any other means—the more we violate God’s laws, the more we cover our innate spiritual knowledge, and the more we suffer.

We each have within us both the divine and the demonic natures. It’s just a question of which qualities we want to cultivate. If we lead a life according to God’s laws, a life of Krsna consciousness, then our divine nature—which, after all, is our real nature—predominates. Such a life is full of peace and spiritual happiness, and it leads us out of the clutches of the material world and back to the eternal kingdom of God. But if we cultivate the demonic qualities, basing our life on the pleasures of the senses, we must suffer. Even a life of so-called wholesome pleasures that rejects cocaine and other drugs is also sinful. The “crash” may take a little longer to manifest—as disease, old age, and death—but it’s no less painful.

The desire to reach out for pleasure is natural in every embodied being, because the embodied condition is ontologically one of lack, of separation from our blissful home in God’s kingdom. But if in our attempt to attain greater happiness we abuse the body with drugs, then we are simply deepening our ignorance and our false identification with matter, which is what has caused our embodied condition in the first place. And the agonizing reactions are plain for all to see.

On the other hand, when we direct our attempts for greater happiness toward increasing our awareness of Krsna and of our eternal relationship with Him, there is no comedown, no crash. There is only a progressive awakening of spiritual bliss and knowledge. If the government is really serious about halting the spread of cocaine use and getting present addicts off the drug, it should help the Krsna consciousness movement spread the science of devotion to God, which alone can destroy the root of the crisis.