Back to Godhead > Prabhupada > A Dog’s Obstinacy 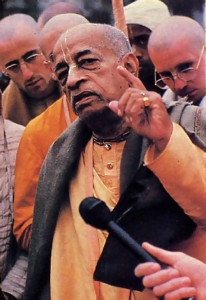 The following conversation between His Divine Grace A.C. Bhaktivedanta Swami Prabhupada and some of his disciples took place in September 1975 on an early-morning walk in Vrndavana, India.

Srila Prabhupada: People are trying simply for sense gratification. They do not even know the purpose of life. So our mission is to eradicate this ignorance. They are living under a wrong conception of life. Not a spiritual conception, but a material one.

Devotee: In Kathmandu I was asking people, “What kind of enjoyment is this from smoking cigarettes? You are coughing. Intoxication—toxin—means poison. So you are actually giving yourself poison. This is sanity? This is human life?” So these people usually told me, “Well, I’ll give up cigarettes later.”

Srila Prabhupada: At least they admit the fault. Do they not?

Devotee: Yes, some people do. I reminded all these people about karma. You know: “According to your activity in this life, you’re preparing your next life. If you live a spiritual life, you’ll go to the spiritual world. If you live a materialistic life—animalistic—you’ll stay in the material world and become an animal.” And they all admitted. “Yes. I know about the law of karma.” But when I said. “Why don’t you serve Krsna?” they said, “Later. Later.”

Devotee: So, Srila Prabhupada, can your instructions in the Srimad-Bhagavatam stop these people’s lust? Or do we have to hope that somehow they will be frustrated in their attempts to enjoy sense gratification?

Srila Prabhupada: They are being frustrated. Who is successful in the material world? Can you name any instance in which someone has been really successful” [Laughs. A brief pause.] Then?

Devotee: Everywhere in this material world, people are miserable. In America, Amy Vanderbilt, the famous etiquette expert, jumped out of her window.

Srila Prabhupada: There are many.

Devotee: Oh, yes. In San Diego and also in San Francisco, they have these fences so that when people jump off the bridges, thev are caught by the fences.

Srila Prabhupada: And I think in Berkeley they had to enclose the top of the clock tower with glass?

Devotee: Oh, yes, at the University of California—to keep the students from jumping off.

Srila Prabhupada: These are signs of how desperate people are, how disappointed with their life of materialism. They are always ready to commit suicide. Some thirty years ago, a man was sitting near me in a railway car—and all of a sudden, he jumped through the window. All of a sudden. He had been sitting nicely. What he was thinking I do not know. But he took the opportunity of the open window and jumped. I saw it.

Devotee: A kind of insanity overpowered him.

Srila Prabhupada: Insanity. Everyone is overpowered by insanity. Everyone who is trying to be happy in this material world—everyone is overpowered by insanity. They do not know the only solution is, as Krsna says, sarva-dharman parityajya mam ekam saranam vraja: “Just surrender to Me.” (Bg. 18.66) But that they’ll not do. Anything but surrender to Krsna.

Srila Prabhupada: Obstinacy. Dog’s obstinacy. Now they are busy manufacturing various types of religious systems so that one may not have to surrender to Krsna. This is going on. Big, big swamis are saying, “Yes, whatever you manufacture, it is all right.” Yatha mata tatha patha: “Whatever you concoct, that is all right.” So people are content. If somebody said, “You surrender unto me,” that would not be very palatable. When somebody says, “No, you can surrender to anyone,” that is very palatable.

Devotee: Because that means no surrender. To surrender to anyone . . .

Devotee: Sometimes people say, “When Krsna wills it that I surrender to Him, then I will do it.”

Srila Prabhupada: Yes. Such rascaldom. You think that Krsna is not willing it, rascal, when He says in the Bhagavad-gita, “You must do this—you must surrender to Me”?

Devotee: Sometimes people say, “When Krsna makes my heart open to Him, then I will surrender.”

Srila Prabhupada: But you have no heart. You have simply stone. In the words of one devotional song: “My heart is harder than a stone. I know that chanting Hare Krsna can melt even a stone, but it does not melt my heart. Therefore I think my heart must be harder than a stone.”

Devotee: Some of these religious systems even say that it is offensive to say the name of God.

Srila Prabhupada: What can I do? If these rascals say something like that, what can I do?

Devotee: Even when they write the word God, they don’t write “G-o-d.” They write “G, dash, d,”—so that they’ve indicated God, but they haven’t said “God.” It’s too holy to pronounce. That’s what they say.

Srila Prabhupada: They might as well say, “G-zero-d.” [Laughter.] That would nicely convey their idea of God.

Devotee: Zero signifies their love for Him.

Srila Prabhupada: Yes. Zero is controlling both sides, G and d. If you multiply something by zero, what does it become?

Srila Prabhupada: That’s all. This kind of thinking is sunyavadi, voidist. It is successful suicide. But we know life is not void, because God is not zero.