An Indian Army General inquires from Giriraja Swami,
a leader in the Hare Krsna movement, about the purpose of life. 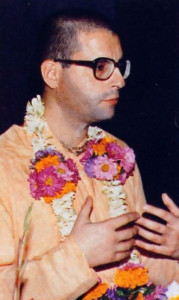 When His Holiness Giriraja Swami visited Pune, India, recently to open a new center of the International Society for Krishna Consciousness, he addressed a well-attended gathering at the city’s main hall, Nehru Memorial. While the divisional commissioner, K. S. Sidhu, and Maharashtra legislator Atui Sangtani sat on the dais with Giriraja Swami, and while Bhari B. R. Malhotra, prominent industrialist and life member of ISKCON, introduced the Hare Krishna movement, Lt. General T. S. Oberoi, in charge of the Southern Command of the Indian Army, humbly look his seat in the audience. (The Southern Command is the largest command in India and covers eight states.) After hearing Giriraja Swami speak and answer questions from the floor. General Oberoi rose. . .

General Oberoi: Your Holiness, I know you are short of time, but may I ask you a question?

For our minor activities in life we have the aims set first, before we get going to achieve them. When we train our people in the army—whatever they have got to do—we first tell them what is the aim. And once they are clear what is the aim, then we decide what means we have got to adopt to achieve that. And invariably we don’t go wrong.

Now here it is, my whole life is going to waste, to my mind—I am still not very clear what is the aim of my life. A lot of people have been benefited by this great movement [ISKCON], by chanting, but I still feel that this is all the means to the end. But only once you are very clear what the aim is can you decide whether chanting is the only answer. Would you kindly, Your Holiness, enlighten us about the aim of life, so that thereafter we can be very, very clear as to what we have got to do to achieve that aim?

Giriraja Swami: Your question is glorious, because it deals with the Absolute Truth and is therefore beneficial for everyone. This same question was asked by Srila Sanatana Gosvami to Sri Caitanya Mahaprabhu. * [*Caitanya Mahaprabhu is Krsna Himself in the role of His own devotee. He appeared in India five hundred years ago to teach love of God through the chanting of the Hare Krsna mantra.] Sanatana Gosvami had been a very highly placed government servant—prime minister to the Nawab Hussain Shah—but he resigned from his government service to join the mission of Sri Caitanya Mahaprabhu.

So when Sanatana Gosvami met Lord Caitanya at Prayag—Allahabad—he said to Him, “My Lord, people flatter me that I am a very great man, a very learned scholar, but actually I am a great fool. And I’m such a fool that when they say I am learned. I believe them, even though I do not even know who I am or what is the purpose of my life. So can you please enlighten me as to who I am and what is the ultimate goal of life?”

In reply, Lord Caitanya explained that the living entity is the eternal servant of the Lord, Sri Krsna, and that the ultimate goal of life is to develop love for Krsna: prema pum-artho mahan.

Now, how to serve God? If we understand we are eternal servants of God, or Krsna, we have to act in our constitutional position. In other words, in addition to theoretical understanding, we have to engage in the practical activity of serving Krsna. So how to serve Krsna?

Lord Caitanya has instructed that the highest standard of service to the Lord is that of the gopis [cowherd girls] of Vrndavana. [The gopis of Vrndavana are renowned in the Vedic literature as the greatest of all devotees of Lord Krsna.]

How is that? Once Lord Krsna said that He had a headache and that the only thing that could cure Him would be dust from the feet of His devotee. So His messenger went and announced that Krsna had a headache and that He could be cured only by the dust from His devotee’s feet. He approached many, but everyone said, “Oh, if the dust from my feet touches the head of the Lord, it will be a great offense. I will go to hell. I’m not going to give dust from my feet for the Lord’s head.” So the messenger became very discouraged. But Krsna advised him, “Now you go to Vrndavana, and see what happens there.”

So the messenger went to Vrndavana, and immediately all the gopis surrounded him. “Oh, you’ve come from Lord Krsna! How is our Lord? Please tell us, how is He doing?”

The messenger replied, “The Lord has a headache.”

“The only thing that will cure Him is the dust from His devotee’s feet.”

Immediately they replied, “Oh, yes, yes! Take it, take it all. Take as much as you want. Take everything.”

The messenger said, “Don’t you know that you could go to hell for this?”

“We don’t care if we go to hell, as long as Krsna’s headache is cured.”

General Oberoi: I thank you, Your Holiness, you have answered my question.