Back to Godhead > Science > Evolution: Puncturing The “Jerk Theory” 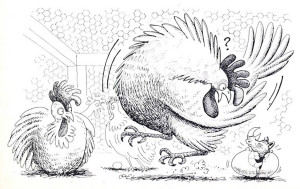 Until recently, most sociobiologists have explained evolution by reference to the tenets of neo-Darwinism, that revamped, updated version of Darwin’s theory of slow, adaptive evolution. But a newer, rival theory—”punctuated equilibrium,” as it is called by Stephen Gould and others—holds that the production of new animal species occurred in comparatively sudden jumps, or “jerks.”

Propounders of the new theory maintain that fossil evidence is in their favor. Why? Because in many cases the intermediate animal forms—which, according to the neo-Darwinists must be there—are conspicuously absent from the fossil record. In other words, the fossil records are not nearly as incomplete as the neo-Darwinists have supposed. And to support this idea, the punctuationists point to the fact that jerks always accompany the branching of the evolutionary tree.

Some scientists see punctuated equilibrium as a useless theory with no basis in fact. A recent issue of New Scientist (June 1984) quotes Dr. John Turner: “Of the essential jerk theory, one can say as Gould did of sociobiology, that it brings no new insights, and can cite on its behalf not a single unambiguous fact.” That the punctuated equilibrium theory has gained so much popularity among sociobiologists indicates just how unconvincing and inconclusive the evidence is for the traditional evolutionary belief. Apparently neither theory can explain the gaps in the fossil record; therefore, both lack credibility.

For many, many centuries, however, the Vedic literature has contained detailed information about the origin of the species. All life forms, according to the Vedic science, appear in the early stages of the Supreme Lord’s cosmic creation, when the Lord impregnates all the living souls within material nature. These indestructible, spiritual souls gradually evolve through the various species—microbes, plants, aquatics, insects, reptiles, birds, animals, and humans. Thus the only evolution is an evolution of consciousness, as the individual souls gradually rise to the human platform. On attaining a human birth, a soul must continue to evolve by cultivating spiritual consciousness; otherwise, according to his desires and karma, he will fall again into the lower species.

One who wastes his human life in sinfulness may be reborn as an animal or a plant, whereas one who acts piously may receive another human body and the opportunity for further evolution through spiritual knowledge and piety. However, one who acts transcendentally—that is to say, one who devotes his life to serving the Supreme Lord, Krsna—ultimately receives a spiritual body and goes back to Godhead. This is the final and highest link in the evolutionary chain. It is the missing link after which we are all searching.

When General Motors and Ford paid their executives a total of $262 million in bonuses last spring. Owen Beiber, president of United Auto Workers, called the payments “obscene.” Beiber vowed he would demand proportionate benefits for the auto workers during negotiations with the auto industry leaders in July. By the time the present Auto Workers contract expires on September 15, Beiber expects to secure added health benefits, greater job security, and significant wage increases.

The controversial executive bonuses came as a result of record profits the U.S. auto industry has raked in since the imposition of the automobile import quota in 1981. With less competition from foreign auto makers, U.S. companies have been able to raise prices by an average of one thousand dollars per vehicle. This one-thousand-dollar-per-car surcharge paid by the American consumer accounts for the record auto-industry profits in 1983—profits that auto workers and executives are now eagerly dividing. Consumers are therefore upset at getting the raw end of the import-quota deal.

Not only in the auto industry but throughout the history of industry and commerce, the question of how to divide the fruits of work has been raised. Isn’t it natural that executives, since they are more directly responsible for profits, be paid more than laborers? Yet how can we expect that either laborers or consumers will not get upset over executive salary bonuses? Ford Motor chairman Philip Caldwell, made more than $7 million in 1983!

The Bhagavad-gita says that the fruits of everyone’s work belong to the Supreme Lord, Krsna, who is the ultimate controller and provider. Although we like to think that we singlehandedly achieve the results of our work, without Lord Krsna’s sanction we can’t claim even a penny.

One practical proof of this is the many intelligent and industrious persons who can’t make ends meet. Or consider the many other persons who are neither intelligent nor industrious and yet have no financial problems. And there are still others who accumulate wealth through years of endeavor and yet die paupers. Therefore, although we must work with intelligence, as if everything depended on us, we have to admit that the final results of our work are in Lord Krsna’s hands.

Since all profits depend on Krsna, they should be used in His service. The million-dollar executive should build temples, establish schools, and publish books to educate people in the science of Krsna consciousness. The laborer also should contribute to the worship and glorification of the Supreme Lord. And consumers, no matter what their economic status, should purchase only what is necessary for a comfortable, hut not extravagant, lifestyle, so that their energy and attention will not be needlessly diverted from achieving life’s ultimate goal—love of God.

No one is exempt from the obligation to offer the results of his or her work to the Supreme Lord. In the Gita Lord Krsna says that even the poorest person can please Him by offering Him “a leaf, a flower, a fruit, or a little water” with devotion. Krsna is impressed neither by the rich man’s millions nor by the pauper’s pennies; He wants only to see evidence of our exclusive devotion to Him.

Experienced devotees of Krsna know, however, that pleasing the Supreme Lord is the most gratifying of all work and that broadcasting His glories is the best service to mankind. Both the million-dollar executive and the wage earner will feel far more satisfaction using their resources in Krsna’s service than in trying to make extensive arrangements for their own comforts. And when executive, laborer, and consumer are all devotees of Krsna, there will be no argument over how to divide profits. 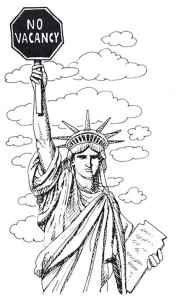 Congress is straining its legislative brain to figure out what to do about the flood of illegal aliens into the U.S.—and what to do about the three to twelve million who are already here. Gone is the benevolent American spirit praised by Emma Lazarus and proclaimed by the Statue of Liberty: “Give me your tired, your poor, your huddled masses yearning to breathe free.” Now, although millions of foreigners apply annually for citizenship, only five to six hundred thousand are allowed to immigrate to the U.S. More than one million are caught each year trying to enter illegally, while an estimated five hundred thousand enter undetected.

A large percentage of these millions of “feet people” now form an exploited underclass, working on farms or in sweatshops for as little as one dollar per hour. This wage is usually much more than they would have made in their own country, so it remains as a very attractive feature. Thus illegal immigrants easily capture jobs that otherwise would have fallen to America’s unemployed.

Few issues on Capitol Hill are stirring as much controversy as the one over amnesty for those aliens already illegally residing in America. While supporters of amnesty point out that America is a melting pot, a nation of immigrants—one in four New Yorkers is foreign born—opponents claim that to reward millions for breaking the law is grossly unfair. Amnesty, says U.S. congressman Bill McCallum, “is unfair to the millions who stood in line to come to this country legally. It is a great slap and a cruel hoax.”

Both sides in this debate, however, would do well to take account of just who is an alien. From ancient India’s Vedic literature we learn that our real identity is neither American nor Mexican nor any nationality, but spirit soul—eternal, fully knowledgeable, and completely blissful. But because we have chosen to challenge the absolute authority of the Almighty, we have been thrown from our home in the spiritual world into this foreign material world to suffer our lot, life after life. Therefore we are all aliens within this material world. Until we realize that our real business is to lovingly serve the Supreme Personality of Godhead, we have to stay here in America, Mexico, Vietnam, Africa, and so on.

The coveted happiness of being an American (or a citizen of any other country) is paltry when compared to the happiness of returning to our original homeland in the eternal spiritual world. Just as we see the life of certain animals as lowly and abominable, so those who are liberated souls regard our life, even in this land of golden opportunity, as thoroughly miserable. From the enlightened, spiritual viewpoint, we are all aliens, emigrants from the spiritual world. We should realize this and try to help one another go back home, back to Godhead, rather than squabbling over petty issues of amnesty and citizenship.