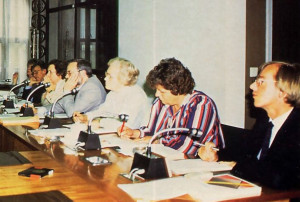 Amsterdam—As the home of the World Court (the United Nations’ International Court of Justice in the Hague) and the International Committee on Human Rights (in Utrecht), the Netherlands is regarded as the nation in which the most difficult international legal disputes are best adjudicated. Rulings from these international bodies frequently cause nations to reverse or radically alter their existing foreign or domestic policies. Therefore it was an event with important worldwide implications when a special Dutch government report recently defined and recognized ISKCON as an official religious body.

The 320-page report, prepared over the last four years by the Dutch Parliament Committee on New Religious Movements, had many favorable things to say about the Hare Krsna movement. The committee, which extensively studied the activities of seven groups in the Netherlands, concluded. “The image of Hare Krishna, according to our findings, is that of a pure, genuinely Hinduistic movement without compromise in the face of Western views.”

The subcommittee also noted that the Hare Krsna movement had matured since the first devotees arrived in Amsterdam in 1970. “Certainly during the first years in our country, Hare Krishna was no more than a marginal hippy group, whose attraction for some lay mainly in the rejection of the Western cultural pattern. The image shaped during that period seems to have hardly changed in the public eye, even though the movement has considerably gained in maturity in the course of the years.”

Hari Krsna dasa, ISKCON’s regional secretary for the Netherlands, feels that the very positive tone of the report stems in part from the devotees’ willingness and eagerness to cooperate with the investigation. “From the beginning, our position was that we very much appreciated such an investigation. We felt that, considering the authentic spiritual foundation of our movement, we would come out well if they spent sufficient time studying us. So we were very favorable towards the investigation.

“Our policy was to be open and honest,” Hari Krsna dasa continues. “If some mistake was made by our movement, we admitted it. At the same time we emphasized that our mistakes were incidental ones, not fundamental ones, and that the integrity of our movement cannot be doubted. I told the subcommittee we don’t think that because our philosophy is absolute and, as far as we’re concerned, perfect, that all of our actions are therefore also absolute and perfect. The committee appreciated this approach.”

The government had originally begun the study because of the bad images of new religious groups created by the media and by lobbyists from “anti-sect” groups. But the subcommittee ended up severely criticizing both the media and anti-sect groups, pointing out that they had created a one-sided picture which distorted reality. They accused the anti-sect movement of waging a campaign of hatred and exaggerating issues by presenting false evidence.

Ladakh. India—Shiv Sharma, professor of Sanskrit at the College of Buddhist Philosophy, has written this appreciation:

“The manner in which His Divine Grace A.C. Bhaktivedanta Swami Prabhupada has presented his encyclopedic Srimad-Bhagavatam with specially-prepared illustrations, original Devanagari script, word for word synonyms, diacriticised transliterations, clear translation and commentary, glossary, Sanskrit pronunciation guide, index to verses, and extensive general index coupled with a table of contents for ready reference is a literary wonder of the world. Also, the clear and precise Purports make these volumes masterpieces.

“Swami Prabhupada’s books teach the principles of brahminical culture, namely, no intoxication; no illicit sex; no gambling; and no eating of meat, fish, and eggs. The value of his books is seen in that he has molded for the better thousands of lost lives. Thus his spiritual writings actually inject realized knowledge into the heart of the student. . . .

“As an educator I highly recommend these books to all school, college, and university libraries. As a believer in the Vedic principles, I cannot but strongly urge all seekers after Truth to study these books.”