Back to Godhead > ~Featured~ > The Rescue of Govindaji

A devotee-king uses his royal power and opulence
To protect and glorify the Supreme Lord.

by Jagatguru Swami and Satyaraja dasa 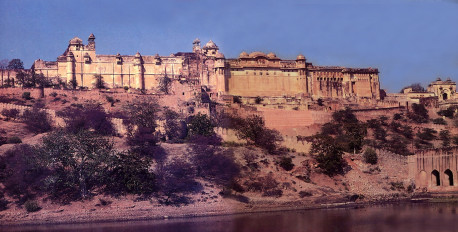 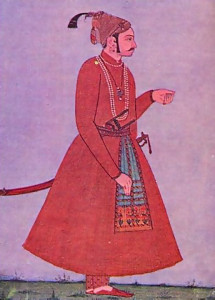 There are indeed many examples of kings who misused their royal position. But there have also been many saintly rulers. Jai Singh II, king of Amir from 1699 to 1745, ascended the throne at the age of thirteen. He quickly mastered engineering, architecture, mathematics, and astronomy. And like his father and grandfather, he was a devotee of Lord Krsna. With daring and devotion, at the age of nineteen he rescued the Govindaji Deity and took Him to his fort in the hills of Rajasthan.

Although the rulers of ancient India and their royal states have passed into legend, the mere mention of a Maharaja or a royal palace of India still conjures up exotic, romantic images. A Maharaja’s luxury was a reflection of his power, and the palace in which he and his family and retinue lived represented an ethos and a way of life that have all but vanished.

Nowadays most people are unaware that the greatest of ancient India’s rulers were devotees of Lord Krsna who used their wealth and influence in His service. Indeed, the primary purpose of Vedic India’s ruling class was to protect religious principles. This they did, and the stories surrounding their activities are more alluring and fascinating than the myths that have grown up over the centuries.

One such true story concerns Govindaji, a Deity of the Supreme Personality of Godhead, Krsna. Devotees of Lord Krsna have traditionally worshiped Him in His Deity incarnation, which is made of stone, wood, clay, or other material elements. Since Krsna is the all-powerful Supreme Lord, He can appear anywhere, even in a form fashioned from matter. The Deity is not an idol—an imaginary form worshiped according to whim—but is shaped and worshiped according to directions given in the Vedic literature.

Krsna also appears personally on earth—as He did five thousand years ago in the district of Mathura in India. Such visits are rare, however, and therefore Krsna’s sincere devotees take advantage of the opportunity to worship Him in His Deity forms. Shortly after Krsna disappeared from the earth almost fifty centuries ago, a great devotee named Vajra established various Deities of the Lord, and one of these is Govindaji. (Govindaji is a name of Krsna that means “one who gives pleasure to the senses, cows, and land.”) These Deities were loved and worshiped for many centuries. 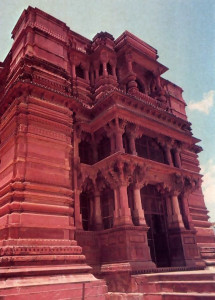 Magnificent remains of the Govindaji temple in Vrndavana attest to the even greater magnificence of the building before the attack of Aurangzeb’s army.

Then came the Moghul invasions, and all of northern India was plunged into war. People fled Mathura—but only after placing their beloved Deities within the earth and burying Them. They prayed that the Moghul rulers would not commit the offense of destroying the Deities, and they hoped the Deities might one day be discovered and worshiped again with full regalia.

Govindaji and the other Deities of Mathura remained hidden until the early 1500s, during the time of Sri Caitanya Mahaprabhu. * [*Sri Caitanya Mahaprabhu is Krsna Himself in the role of His own devotee. He appeared five hundred years ago in India to teach love of God through the chanting of the Hare Krsna mantra.] At that time, two of Lord Caitanya’s chief disciples, Srila Rupa Gosvami and Srila Sanatana Gosvami, set about recovering Mathura’s ancient Deities. 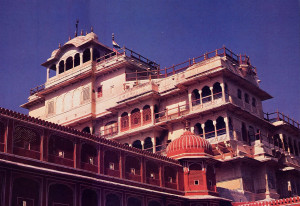 Jai Singh, from his royal quarters in the City Palace of Jaipur, could see his beloved Deity

One night, the Govindaji Deity whom Vajra had installed thousands of years ago appeared to Rupa Gosvami in a dream and revealed to him where He lay buried. Rupa Gosvami then excavated Govindaji and personally took charge of His regular worship. Being in the renounced order, however, he had no means for building a temple for his beloved Deity.

Rupa Gosvami was renowned as a great philosopher and as an authority on the Vedic literatures; therefore, he was often requested to attend the court of Emperor Akbar, who had a love for religious and philosophical discussion. Rupa Gosvami had written many books on the science of Krsna consciousness, and his writings, which embodied the very essence of spiritual wisdom, intrigued Akbar. After all, the emperor was an avid reader of the world’s great scriptures, and Rupa Gosvami had mastered the Vedas, the most time-honored and comprehensive of them all.

Akbar had a dear friend named Man Singh. As a general in the emperor’s army, Man Singh faithfully executed many arduous tasks, eventually attaining the post of king of Amir. Like Akbar, Man Singh was fascinated by Rupa Gosvami, and he one day set out for Vrndavana to meet the great saint. On meeting Rupa Gosvami, Man Singh became convinced of his exalted character. Wanting to render service to this genuine holy man, he decided to finance the building of a magnificent temple in Vrndavana for the Govindaji Deity. For five full years, several thousand men labored with great care, building one of the most gorgeous temples in the world.

The temple was four stories high, with an altar of marble, silver, and gold. A sculptured lotus flower weighing several tons decorated the main hall, where pilgrims thronged daily to see the Deity. Thus Govindaji was again being worshiped with great opulence and devotion. This continued until the early eighteenth century.

Aurangzeb, one of the last in the line of Moghul rulers, was a tyrant and an avowed enemy of Vedic culture. He plundered much of India, destroying many beautiful temples and their Deities. During the time of Aurangzeb’s infamous emperorship, Man Singh’s grandson, Jai Singh II, ascended the throne of Amir at the age of only thirteen. As he grew to manhood, he quickly mastered engineering, architecture, town-planning, mathematics, and astronomy. And like his father and grandfather, he was a devotee of Lord Krsna. Although he extended his patronage to all communities equally, the Krsna devotees enjoyed his special favor, because he understood the devotees to be engaged in the very essence of authentic spirituality.

One night as the aging Aurangzeb sat on his veranda enjoying the clear night and starry sky, he noticed one stationary star. On inquiring from his servant, he learned that the so-called stationary star was, in fact, the fire atop the Govindaji temple in Vrndavana, some ninety miles away. Unable to control his fury and envy, Aurangzeb vowed to blot out the disconcerting star. 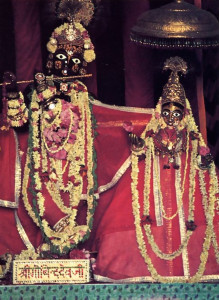 With His eternal consort , Srimati Radharani, Lord Govindaji is worshiped today in Jaipur, the “City of Victory” built for Him by Jai Singh.

That very day, Jai Singh II, now nineteen, was visiting the royal court at Agra. When he heard that Aurangzeb was going to destroy the temple of Govindaji, the temple his grandfather had built for Rupa Gosvami, he became overwhelmed with disgust and anger. Immediately Jai Singh set out for Vrndavana with a plan to save Govindaji. He knew he would be unable to save the temple, but at least he could rescue the Deity.

On arriving in Vrndavana, Jai Singh warned the people, who then fled the town. Jai Singh next carefully removed Govindaji from the splendor of His temple and, in great haste to avoid Aurangzeb’s advancing army, transported Govindaji to his well-fortified capital in the desert hills of Rajasthan. 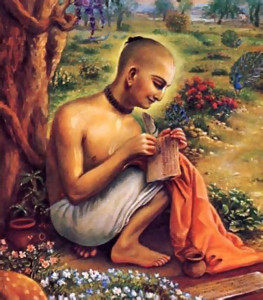 Govindaji was originally the Deity worshiped by Rupa Gosvami, the great Vaisnava saint and author.

When Aurangzeb and his army reached the Govindaji temple, Aurangzeb was furious to find that the Deity was gone and the townspeople had been alerted. Still, with hundreds of war elephants and thousands of men, he began to bring down the mammoth Govindaji temple, story by story, until only one story remained. All of a sudden, the ground of Vrndavana began to shake violently. Aurangzeb’s men were terrified and ran for their lives, never to return.

Although Aurangzeb wanted to kill Jai Singh for disrupting his plans, he was now old and faced more pressing problems within his empire. He soon died in South India.

With the rapid decay of the Moghul empire after Aurangzeb, Jai Singh’s reputation as a righteous and powerful ruler grew. At the age of forty, he envisioned an immense new city, with Lord Govindaji at the center, residing within a beautiful temple. And as fifty-five thousand men labored for fifteen years, the dream began to manifest. Thus Jai Singh created his “City of Victory,” Jaipur, a dedication to Lord Govindaji.

Jaipur city was fashioned according to Silpa-sastra, the part of the Vedas dealing with architecture and design. And although established in the early eighteenth century, it is still functional and appreciated for its masterful construction. The city was arranged on a grid of wide avenues connected by smaller roads, all focusing on the palace at its heart. Govindaji’s temple stood in a beautiful garden by the palace, and when the temple doors were open, Jai Singh could see his beloved Deity from the royal quarters. Government buildings and open marketplaces surrounded the central palace and temple, and a forty-five-foot-high wall circled the entire city. With God at its center, Jaipur was the ideal city, and today it is the capital of Rajasthan.

From the story of Govindaji we can see how Lord Krsna gives His devotees opportunities to serve Him in magnificent ways. Jai Singh’s grandfather, Man Singh, was able, by the Lord’s grace, to build a magnificent temple for Govindaji. And although that temple was later partially destroyed, Jai Singh had the opportunity to rescue and protect Govindaji and to later construct for Him an entire city. Thus the devotee is always unshaken, seeing even a dangerous situation as an opportunity offered by the Lord to render loving service. 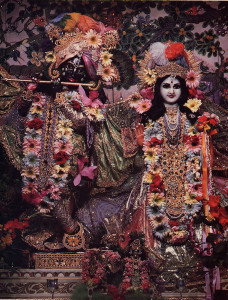 The Radha-Govinda Deities at ISKCON’s temple in New York City were presented to Srila Prabhupada by the queen of Jaipur in 1972.

In 1972, when His Divine Grace A.C. Bhaktivedanta Swami Prabhupada, the founder-acarya of the International Society for Krishna Consciousness, traveled to Jaipur with some of his Western disciples, Govindaji was still being worshiped by thousands of devotees, Srila Prabhupada and his followers were happy to see this. Thus, there was a mutual exchange of love between the inhabitants of Jaipur and the ISKCON devotees, for these devotees were also worshipers of Lord Govinda, or Krsna, the Supreme Personality of Godhead.

Just as Srila Prabhupada’s American and European disciples were moved to see a living legend of Krsna consciousness in Jaipur, so the queen of Jaipur, Maharani Gayatri Devi, was moved by the devotion of Srila Prabhupada and his followers. To show her appreciation, she offered Srila Prabhupada a pair of large marble Deities of Radha and Krsna, similar to the original Radha-Govindaji Deities. Srila Prabhupada accepted the Deities and immediately shipped Them to his ISKCON center in New York. The Deities, he said, would be known as Radha-Govinda.