Back to Godhead > ISKCON > News > The Life Story of His Divine Grace A.C. Bhaktivedanta Swami Prabhupada 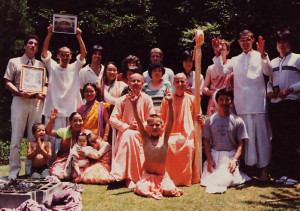 Srila Ramesvara Swami and Kavicandra Goswami (seated at center) with devotees and guests from the Tokyo ISKCON center.

Tokyo—Srila Ramesvara Swami and Srila Bhaktisvarupa Damodara Swami, two of ISKCON’s initiating spiritual masters, attended a recent convention here on karma and reincarnation, hosted by the Institute for Religious Psychology. Srila Ramesvara Swami’s lecture on Krsna consciousness was well received, and the Institute’ plans to publish it along with other lectures given at the convention.

The Institute’s director, Dr. Hiroshi Motoyama, warmly thanked Srila Ramesvara Swami for his participation in the function. Dr. Motoyama has been a friend of ISKCON for many years and enjoys introducing people to the Hare Krsna movement.

Under the guidance of Srila Ramesvara Swami and Kavicandra Goswami, president of the Tokyo temple, Krsna consciousness is beginning to blossom in Japan. Japanese youth are showing interest in spiritual life, as they tend to be less materialistic than the older generation, which struggled to build up Japan’s economy after World War II. Some young Japanese are realizing that economic development is not the solution to life’s problems, and they want to find real answers.

On account of growing public interest in Krsna consciousness, a new, larger temple was recently opened near downtown Tokyo, and Kavicandra Goswami reports that attendance at the Sunday festival and feast is growing.

Three nights a week a party of devotees chants Hare Krsna in the busiest parts of town, attracting the attention of the after-work crowd. The devotees are also taking advantage of the crowded Japanese train stations for introducing Krsna consciousness to the public. Dressed in traditional robes and tilaka, the shaven-headed men profusely distribute Srila Prabhupada’s books.

The devotees here are certain that more and more Japanese people will soon become Krsna conscious, because the Japanese are enthusiastic about chanting japa (the individual chanting of the Hare Krsna mantra on beads). Since the popular Japanese concept of spiritual practice is to sit quietly in a yoga posture chanting mantras, japa seems natural. Devotee attire and appearance come naturally too, because of the Japanese familiarity with Buddhist monks, who also dress in robes and shave their heads. 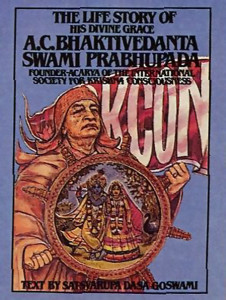 Srila Satsvarupa dasa Goswami, one of ISKCON’s initiating spiritual masters and author of Srila Prabhupada’s authorized biography, and Sesa dasa, the director of ISKCON’s Philadelphia center, prepared the manuscript for this thirty-two-page book. The pencil drawings were done by Bhaktisiddhanta dasa, one of the principal artists for ISKCON projects in India.

Bala Books has now topped the two-hundred-thousand mark in its production of transcendental literature for children. The project began in 1977 with a printing of fifteen thousand copies of Agha, The Terrible Demon, a book that later appeared in a list of recommended readings that is published by the National Council of Teachers. Bala Books has published more than a dozen titles since then, one in six languages.

Readings in Vedic Literature/or Children, another Bala Books publication, was recognized for its special merit by the International Youth Library of Munich. And most recently, the School Library Journal, America’s leading reference magazine for school and public librarians, published a favorable notice of A Gift of Love: The Story of Sudama the Brahmin.