Back to Godhead > ~Featured~ > Understanding the Source of Everything

Understanding the Source of Everything 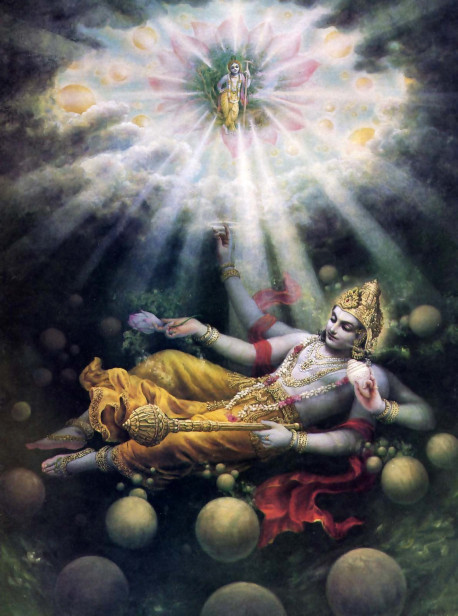 Generally, a person with a philosophical mind is inquisitive to know what is the origin of all creations. At night he looks into the sky and naturally wonders what are the stars, how they are situated, who lives there, and so on. All these inquiries are quite natural for a human being, because he has a more developed consciousness than the animals. And to reply to such a sincere inquirer, the Srimad-Bhagavatam says that the Lord is the origin of” all creations. He is not only the creator, but also He is the maintainer of the cosmic situation, and He is also the destroyer of it. He is the supreme will behind all these activities.

There are atheists of various categories who do not believe in the conception of a creator, but that is due to their poor fund of knowledge only. Everything has its origin in the Supreme Lord. Everything. Whatever you see, it has originated from the Supreme Lord. And this is confirmed in other Vedic literature: yato va imani bhutani jayante. Imani bhutani—for all these things which are created, there is a source.

That source is Brahman [the Supreme]. The second code of Vedanta-sutra confirms this—janmady asya yatah: “The Supreme is that from which everything has come.” In the first code, it is said, athato brahma-jijnasa: “Therefore one should inquire into Brahman, the Supreme.” What is Brahman? This is explained in the second code: janmady asya yatah: “Brahman is that from whom” (or from which—whatever you like) “everything has emanated.”

Some say that consciousness is generated by the combination of matter. But up till now no scientist has proved that by combining chemicals, physical things, one can produce consciousness. Rather, the Bhagavatam very nicely describes that the supreme source of everything is conscious. He is conscious. And in the Bhagavad-gita you’ll find that Krsna says, vedaham samatitani vartamanani carjuna: “I know everything about atitani” (what the past is), “and I know what the present is, and I know what the future is.” And, based on this understanding, Krsna says in the Second Chapter, “You, Me, and all these persons who have assembled here—we were individual persons in the past, we are individual persons now, and we will continue to be individual persons in the future.”

The Lord is conscious in two ways: anvayad itaratas ca—directly and indirectly. God is the all-powerful supreme consciousness. Therefore He is directly conscious and indirectly conscious. The chief engineer of a complicated construction project does not personally take part in all aspects of the construction, but he knows every nook and corner, because everything is done under his direction. Similarly, the Personality of Godhead, who is the supreme engineer of the cosmic creation, knows every nook and corner of the creation. He is conscious of all minute details.

That Supreme Lord is dhamna svena sada. Sada means “always,” or “eternally,” and dhamna svena means “in His own abode.” Dhamna svena sada nirasta-kuhakam. Nirasta-kuhakam means “where there is no illusion.” Here everything is kuhaka, illusory. Everything is made of earth, water, and so forth—temporary things. The things of this world are just like dolls. Sometimes, in the storefront of a big mercantile firm, you find a nice girl doll standing with a dress. So, that girl is kuhakam, an illusion. Those who know will think, “Oh, it is only a doll.” And that is the difference between a man in knowledge and a man in ignorance: those in ignorance are accepting this material “doll,” this material world, as reality. That is materialism. And those who are in knowledge—they think, “No—it is a ‘doll,’ an illusion, the reality is different.” However, sada nirasta-kuhakam, that doll-illusion is not there in the Lord’s abode. There the Supreme Truth exists (satyam param dhimahi).

So our aim should be to offer our obeisances unto the Supreme Lord along with His eternal abode. The impersonalists take it for granted that everything is God, so they think we can approach the Supreme Truth in any way. That is not accepted here in the Srimad-Bhagavatam. Here it is clearly stated, satyam param dhimahi: the eternal, spiritual part of the Supreme Lord should be worshiped, not the temporary manifestation.

That is the defect of modern civilization: they have no information from the proper authorities, so they don’t care for the spiritual part of the body. Whenever we meet some gentlemen and begin to talk about the spiritual necessities of life, they at once think, “Oh, Swamiji’s talking some nonsense; let us go away.” But if you talk of politics and every worldly thing, they become very much interested.

Yasyatma-buddhih kunape tri-dhatuke. In relationship with this body, we have manufactured so many things, so many bodily necessities. So the Bhagavatam says, tasya pramattah nidhanam pasyann api na pasyati. Pramattah: the people are mad, crazy. Although they are seeing that everything is being vanquished, that it is all being annihilated, still na pasyati—they do not see. Why? They are pramattah, crazy. The Bhagavatam has given a designation to these people who are materially interested: they are pramattah, crazy.

Tasya pramattah nidhanam pasyann api na pasyati. I see that my father has died, my father’s father has died, his father has died, and I am going to die. Similarly, my son will die and my grandson will die. And never will we come back again. Once this body has vanished, there is no chance of its coming back. It has vanished forever, just like a bubble in the ocean. Still, people are interested in bodily activities. Therefore, they have been described as pramattah. Pra means “specifically.” Mattah means “mad.” They are specifically mad. And therefore, pasyann api na pasyati: although they see, they do not see. We have seen that everything is going to be vanquished. In the past we have seen so many empires, so many Napoleons, so many Subash Boses, so many Gandhis—they have come and gone. What is the use of becoming a Subash Bose or a Gandhi or a Napoleon or a Hitler or a great politician? Rather, let us in this life be engaged in spiritual realization so that we can make a complete solution to the problems of life.