Back to Godhead > Society > Cow Protection > Protect the Cows

Guru to Islanders: Protect the Cows 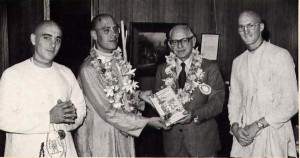 On a recent journey to the South Pacific, His Holiness Tamala Krsna Gosvami (one of ISKCON’s eleven initiating spiritual masters) visited the island nation of New Zealand. While there he met with the mayor of Auckland, addressed a large gathering at the Auckland Town Hall, and stopped at ISKCON’s new farm community just north of the capital.

Throughout his visit, Tamala Krsna Gosvami urged the people of New Zealand (one of the world’s largest meat-producing nations) to “work the land and protect the cows.”‘ In front-page coverage the national press quoted him as saying, “Why don’t New Zealanders show the world that people can live off the land without anxiety? By protecting the cow, rather than killing it, we can be very happy.”

Later, Tamala Krsna Gosvami presented Auckland mayor Sir Dove-Meyer Robinson with Bhagavad-gita As It Is, which affirms that the basis for a peaceful. God conscious society is agriculture and the protection of cows. Mayor Robinson related that when his hosts had offered him meat at a business luncheon earlier that day, he had replied, “No, thank you. I’m not a cannibal—I don’t eat my relatives.”

At ISKCON’s newly acquired farmlands on Auckland Harbor, Tamala Krsna Gosvami asked the New Zealand devotees to demonstrate to their countrymen the practical advantages of the Krsna conscious life-style of simple living and high thinking. 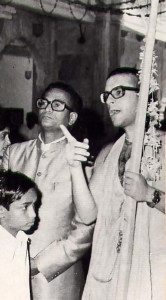 The mayor of Bombay recently joined ten thousand of his fellow citizens at ISKCON’s new cultural center on Juhu Beach to celebrate one of India’s main national holidays.

Mayor Sri Wamanrao Mahadik was the chief guest at the festival marking the appearance day of Lord Ramacandra, an incarnation of Krsna who long ago ruled India as the perfect monarch. Regarding the work of the International Society for Krishna Consciousness, the mayor said, “We feel very proud today to see how you are propagating Indian culture. This is a great day in our lives. We want to extend all facilities to help this great cause.”

After touring the ultramodern International Guesthouse at the Juhu Beach complex, the mayor remarked, “This place is so nice that I am sure Lord Krsna and Lord Rama will personally come here to take rest.”