To His mother and father, Lord Krsna was an endearing child. To the demons, He was death personified. 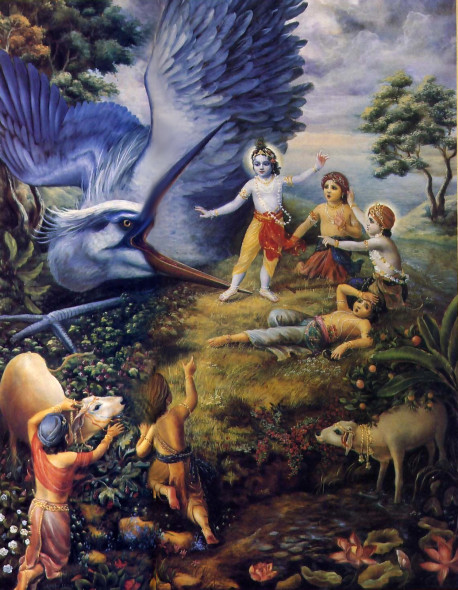 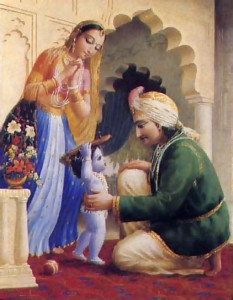 Playing like an ordinary child. Lord Krsna, the Supreme Personality of Godhead, was a constant source of pleasure to His parents. His mother Yasoda would say, “My dear Krsna, please bring my wooden measuring pot,” and somehow little Krsna would bring it to her. Or Krsna’s father Nanda Maharaja would say, “Please bring me my wooden slippers.” And with great difficulty Krsna would put the slippers on His head and bring them. Every so often Nanda and Yasoda would ask Krsna to lift some heavy object, and He would simply stand and touch it, as if He were at a loss what to do.

At times the neighboring cowherd women (the gopis), would clap their hands and promise, “If You dance for us, dear Krsna, we shall give You half a sweetmeat.” Krsna would smile and dance as if He were a wooden doll in their hands. Sometimes at their bidding, He would sing very loudly. In this way He became submissive to the gopis. Through these pastimes Krsna wanted to show great philosophers and sages that although He controls the universe. His pure devotees control Him.

One day an elderly woman came near Krsna’s house to sell fruit. She called out, “If anyone wants fruit, please come to me and get it!” Krsna immediately took some grain in His hands and went to barter for fruit, just as He had seen the older people do. But He was not very careful to hold His hands tight, and He was dropping all the grain as He walked. Still, being captivated by Krsna’s beauty, the fruit vendor accepted whatever few grains were left in His palm. Then she affectionately filled His hands with fruit. At that moment, through His mystic power Krsna filled the woman’s basket with jewels and gold. Whoever gives something to the Lord is never the loser; he is the gainer millions of times over.

Some time later, Krsna was playing with His older brother Balarama and some other children on the bank of the River Yamuna. When Yasoda went to call Krsna and Balarama for lunch, They were so busy playing that They didn’t come. “Krsna!” she called. “Please come home! It’s already past time for Your lunch! Balarama, please come back. You boys have been playing all morning, and now You must be very tired and hungry. Please come home and take Your lunch. Your father Nanda Maharaja is waiting for You. He won’t eat until You come back, so please hurry.”

As soon as Krsna and Balarama heard that Nanda Maharaja was waiting for Them, They started to return. But just then Krsna’s playmates complained, “Krsna, You’re leaving just when we’re having the most fun. Next time we won’t let You leave. Or maybe we won’t even let You play with us at all.”

Little Krsna became afraid, and instead of going back home for lunch. He went back again to play with the boys. Mother Yasoda scolded Him. “My dear Krsna, do You think You are just a street boy? You have no home? Please come home right this minute. Besides, today is Your birthday. You can’t just play all day—You have some important things to do. Every little boy that has a birthday must give some cows in charity to the good brahmana priests. And just look at Yourself! You’re all covered with dust and sand, so come home and let me give You a bath. Don’t You know that all Your friends at home are very clean?” Finally Krsna and Balarama came home. There mother Yasoda bathed and dressed Them very nicely and decorated Them with ornaments. Then she called for the brahmanas and held a birthday celebration for her wonderful child.

After all of this, the elder cowherd men met with Nanda Maharaja to consider how to deal with some recent disturbances in their village. Nanda’s brother Upananda, who was very learned and experienced, began to speak. “My dear friends,” he said gravely, “now we should leave this place, because great demons are always coming here to disturb our peaceful lives. Mostly, they are trying to kill the small children. Just consider the witch Putana—it is simply the Lord’s mercy that Krsna escaped her hands. Next the whirlwind demon took Krsna into the sky to kill Him, but by the grace of the Lord, this demon fell down on a stone slab and died, More recently. Krsna was playing between two trees, and they almost fell down right on top of Him. Just imagine the calamity if He or any of the other children had been crushed by the falling trees! This place is no longer safe. I think that all of us should go to the forest called Vrndavana. That place is very suitable for us, because it is lush with grass, herbs, and creepers for our cows. Also, it has nice gardens and tall mountains. We can all be happy there—let us go today.”

The rest of the cowherd men agreed, and they began loading their household belongings onto their bullock carts. The women, children, and old men of the village sat in the carts, while the cowherd men, who carried bows and arrows, walked in front and looked after the cows, bulls, and calves. With horns and bugles sounding, the caravan set off for Vrndavana. Along the way, mother Yasoda sat with Krsna on her lap, and she enjoyed talking with Him.

Soon the caravan reached Vrndavana, where all the seasons are pleasing. When Krsna and Balarama saw Govardhana Hill and the River Yamuna, They were very happy. The cowherd men made a camp by drawing their bullock carts around them in the shape of a half-moon, and later they built permanent houses. 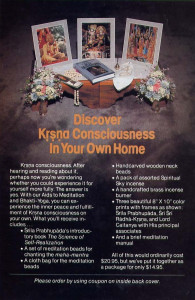 Before long the cowherd men placed Krsna and Balarama in charge of the calves, and every day the brothers would go along with the other cowherd boys into the pasturing ground. Sometimes all the boys played football with amalaki and bael fruits, and their ankle bells jingled as they ran. Sometimes they made themselves into cows and bulls by covering themselves with blankets. Then they roared and fought with one another. They also imitated the sounds of swans, peacocks, cranes, and monkeys.

Once, while Krsna and Balarama were playing on the bank of the Yamuna, a demon named Vatsasura took the shape of a calf and came to kill Them. Vatsasura mingled with the other calves, but Krsna noticed this and signaled to Balarama. Although Krsna is the Supreme Lord and knows everything, He pretended He didn’t understand what the demon was up to. Both brothers followed Vatsasura and sneaked up on him. Suddenly Krsna caught the demon-calf by his hind legs and tail, whipped him around, and threw him into a kappitha tree. The demon lost his life and fell down to the ground along with many kappitha fruits. (This fruit is sweet and sour, and all the cowherd boys liked to eat it.) Krsna’s playmates gathered around Him and said, “Well done!” And the demigods in the sky showered flowers. With the trouble past, Krsna and Balarama ate Their breakfast. In this way Krsna, who maintains the whole creation, used to take care of the calves.

Every day the cowherd boys would go to the bank of the Yamuna to water their calves, and the boys would also drink. One day they had taken a drink and were sitting on the riverbank when they saw a huge ducklike animal. It was as big as a hill, and the boys were afraid. Suddenly the demon, who was called Bakasura, came at Krsna with his sharp beak and swallowed Him up. All the cowherd boys were stunned and breathless, as if they had died. But Krsna became like a fire and burned the demon’s throat. Then Bakasura threw Krsna up and tried to kill Him by pinching Him with his beak. But Krsna caught hold of the gigantic duck’s beak and pulled it apart. He split Bakasura down the middle, just as an ordinary child splits a blade of grass. From the sky the demigods showered mallika flowers and sounded celestial kettledrums and conchshells. Now that Krsna had come out victorious, the boys felt as if they had regained the very source of their life. One after another, they embraced Krsna. After this they rounded up all their calves and headed home.

When the boys arrived in the village, they told everyone what had happened. On hearing how Krsna had done away with Bakasura, all the cowherd men and women felt deeply moved, because they loved Krsna very much. “It is astonishing that this boy Krsna has faced so many causes of death,” they thought. “But the demons have not harmed Him at all. They themselves have died, like flies rushing into a fire.”

The residents of Vrndavana always talked about the wonderful activities of Lord Krsna and Lord Balarama. They were so absorbed in these discussions that they forgot about the miseries of material life. And what they enjoyed five thousand years ago is open today to anyone who hears or speaks about the transcendental pastimes of Lord Krsna, the Supreme Personality of Godhead.