Back to Godhead > ISKCON > Temples > The Form of God: Fact or Fancy?

The Form of God: Fact or Fancy?

Is God a formless force, or the supreme eternal person ?

An analysis by Candidasa dasa. 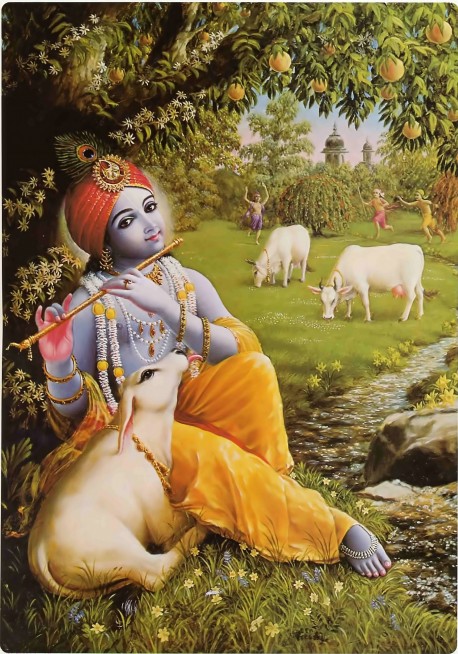 Very often the readers of BACK TO GODHEAD become puzzled when they see a picture of Lord Krishna. Usually they have been exposed only to Western religious philosophy, which hints that God is a person—the eternal father of every living entity—but gives scanty information about His form. For this reason many people think God is formless or void. But by using a little logic we can easily understand that if God is our eternal father, He must have form. Our fathers are persons with form. And if we count back thousands of generations we will find that our forefathers were also persons with form. Why should we think that the original, primeval, absolute father (God) is not a person, or that He is a formless person? The word person implies form; a formless person does not exist.

Nevertheless, many people think that since God is spirit, He must be formless. They consider spirit to be some transparent, ethereal “force.” However, beyond this hazy conception of spirit, which is not upheld in any of the great scriptures of the world, is the scientific explanation of spirit—or, as modern science calls it, antimatter—found in the Vedic literatures.

The Deity of Krishna in the ISKCON Temple in Paris.

The Vedic literatures do not deny the formless aspect of God. Rather, they explain that beyond the formless, impersonal realization of God is the highest understanding of the Absolute Truth as the Supreme Personality of Godhead. The Vedic literatures explain that God, Krishna, is a person. Just as we are all individual persons, so God is also an individual person. But He is not an ordinary, materially covered person like us. He is a transcendental person (nityo nityanam cetanas cetananam). And to realize His personality is to realize all His transcendental features—His name, His qualities, His activities, His associates, and His form.

God, who is complete, cannot be formless. Everything in His creation has form, so how can God have no form? This would mean that God is less than His creation—or in other words, that the complete is incomplete, which is simply illogical. The complete whole must contain everything within our experience and beyond our experience; otherwise He cannot be complete. In addition, all the great scriptures of the world instruct us to love God. How can we love something formless or void? It’s impossible. We are all persons, and we desire to love other persons—not some dark oblivion in outer space. We desire personal relationships, and the ultimate relationship is with the Supreme Personality of Godhead.

The form of Krishna—with His bluish hue, lotus eyes, blooming youthfulness, and pearl-white smile—is not fanciful. It is not created by an artist, a philosopher, or a mundane poet after seeing the beautiful panorama of the material world. This anthropomorphic idea doesn’t answer the question, “Where does the beauty of nature come from?” Actually, the beautiful things of nature are reflections of Krishna’s original beauty. He is the prototype, as He explains in the Bhagavad-gita (10.41). Yad yad vibhutimat sattvam srimad urjitam eva va/tat tad evavagaccha tvam mama tejo-‘msa-sambhavam: “Know that all beautiful, glorious, and mighty creations spring from but a spark of My splendor.”

Now we might ask, “Why do you accept the statements in the Vedic literature about the form of God?” But if we reflect for a moment, we can understand that every day we accept the statements of superior authorities on subjects we know nothing about. For instance, few of us have ever actually visited mainland China, yet we believe that it exists and that almost a billion people live there. We believe the magazine, newspaper, radio, and television reports about China. These are the sources of our knowledge, and if we wish we can confirm them by going to China ourselves. In the same way, the Vedic literatures are the source of knowledge that reveals Krishna’s form to us. And we can confirm that knowledge as well—by following the Vedic teachings in our everyday life and developing the vision to see Krishna directly.

However, to properly receive the Vedic teachings, we must approach a perfect authority, whose knowledge is coming from the Absolute through an unbroken line of spiritual masters. Then our knowledge will be perfect. His Divine Grace A.C. Bhaktivedanta Swami Prabhupada is such a spiritual master, and he is giving us authoritative knowledge of Krishna’s form through books such as Bhagavad-gita As It Is, Srimad-Bhagavatam, and Brahma-samhita. These books have existed more than five thousand years, and by following them many learned men have attained perfect knowledge of Krishna’s form. For example, Brahma-samhita is a detailed description of Krishna’s form by one of the most exalted personalities in the universe, Lord Brahma. After thousands of years of meditation, Brahma actually met Krishna face to face. In his ecstasy he related what he saw:

“I worship Govinda, the primeval Lord, who is adept at playing on His flute, who has blooming eyes like lotus petals, whose head is bedecked with a peacock feather, whose figure of beauty is tinged with the hue of blue clouds, and whose unique loveliness charms millions of cupids” (Bs. 5.30).

“I worship Govinda, the primeval Lord, whose transcendental form is full of bliss, truth, and substantiality, and who is thus full of the most dazzling splendor. Each limb of that transcendental figure possesses in itself the full-fledged functions of all the other organs, and He eternally sees, maintains, and manifests the infinite universes, both spiritual and mundane” (Bs. 5.32).

Experts in the science of bhakti-yoga have related to us the knowledge of Krishna’s form through an unbroken disciplic succession. They encourage us to test the methods they prescribe, and to experience unlimited pleasure by seeing Krishna’s form ourselves.

By reading the books of His Divine Grace A.C. Bhaktivedanta Swami Prabhupada, we can learn about Krishna’s names, qualities, pastimes, and form. Then, with determination, we can practice the scientific process of Krishna consciousness and elevate ourselves to the perfectional stage of life—pure love of God. 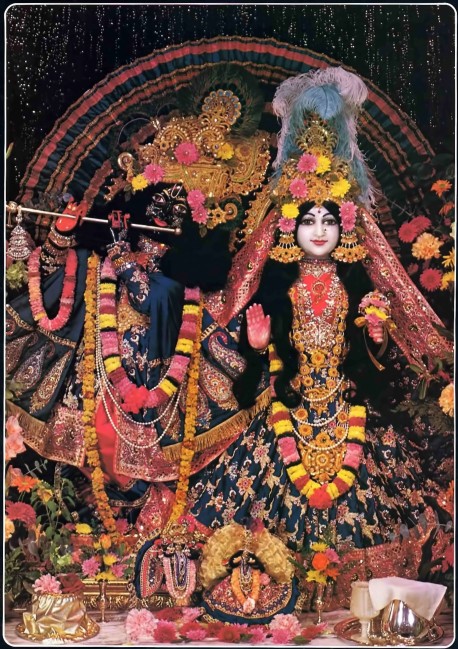 Lord Krishna’s beauty possesses mind-attracting splendor greater than emeralds. His lustrous body resembles a dark cloud newly appearing in the sky during the rainy season. Just as the rainfall glistens, His bodily features also glisten. Indeed, Krishna is the sum total of all beauty. He stands gracefully with His legs crossed. His body curved, and His head tilted to the side. His yellow garment is more attractive than newly arrived lightning. A peacock feather decorates His head, and on His neck hangs a lovely necklace of brilliant pearls. Lord Krishna’s eyes defeat the beauty of white lotus flowers, and His eyebrows move slowly like bumblebees on His lotuslike face. As He takes His charming, flute to His lips and moves His fingers upon it here and there, His face looks as beautiful as the full autumn moon.

Candidasa dasa, who came to the Hare Krishna movement in late 1973, graduated from the State University of New York (at Buffalo) with a B.A. in history and later taught at Niagara University. At present, he teaches the science of Krishna consciousness at the ISKCON temple in Pittsburgh.

One Response to The Form of God: Fact or Fancy?