Back to Godhead > Krishna > Lord Caitanya > From Sadist to Saint

From Sadist to Saint 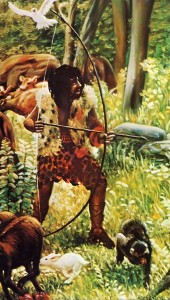 He enjoyed half-killing animals and watching them writhe in pain.
But before long he wouldn’t harm and ant…

Once, as the holy sage Narada was making his way to Allahabad, India, he came upon a deer writhing in pain on the forest floor. It was pierced with an arrow, and its legs were broken. Farther along, Narada saw a boar twisting in agony—it, too, pierced with an arrow, its legs broken. Still farther, a rabbit was going through the same torment. All this suffering pained Narada’s heart, for devotees of the Lord always feel sympathy for others. So Narada wondered, “What fool has done such gruesome things to all these helpless creatures?” Deeper into the forest, Narada saw the culprit—a hunter, lurking behind a tree. With his reddish eyes, dingy complexion, and dangerous expression, he looked like the lord of death, Yamaraja, standing with a bow and arrows in his hands. Seeing the hunter bracing to kill more animals, Narada approached him. As Narada brushed through the foliage, all the animals fled. Enraged, the hunter was about to attack Narada with foul language. But the saint radiated such goodness and kindness that the hunter’s temper cooled. Amazingly meek, he put a question to Narada.

“O great saint, why have you strayed from the common path through the forest to come here? Just by seeing you, all the animals I was stalking have gotten away.”

“Yes,” Narada replied, “please forgive me. I have come here to ask you about something that’s troubling me. I’ve seen many boars, deer, and rabbits on the path—half-killed and writhing in agony—and I suspect you have done this.”

“But you are committing great sins!” Narada protested. “If you must kill animals for a living, why not kill them and be done with it? Why do you leave them half-killed and dying in anguish?”

“My dear sir,” replied the hunter, “my father named me Mrgari, ‘the enemy of the animals.’ He taught me to half-kill animals and leave them flopping around in pain. When I see half-killed animals suffer, I feel great pleasure.”

“Of course, my dear sage. Take whatever animals or anything else you’d like. If you want some animal skins, come to my house. I’ll give you either a deerskin or a tiger skin.” 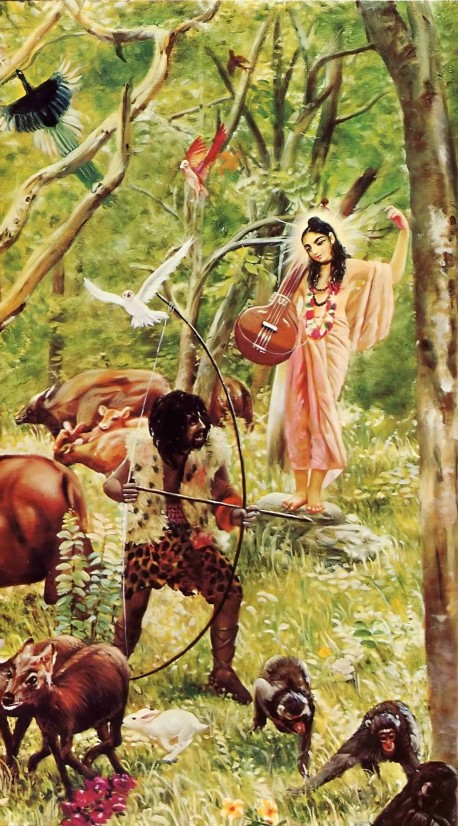 As the animals fled, the enraged hunter was about to attack Narada with foul language.

“I do not want any animal skins, but I do want something else. Just promise me one thing—that from now on, whenever you kill an animal, you will kill it completely—you will not leave it half-killed.”

“My dear sir,” said the hunter, “what kind of request is that? What’s the difference between half-killing animals and completely killing them? What’s wrong with leaving the animals lying half-killed?”

Narada explained, “If you leave the animals half-killed, you are purposely giving them pain. And by the law of God and nature, whatever pain you give to others you must suffer in return. My dear Mrgari, you kill animals for your living. Now, when you kill animals you certainly commit horrible sins, but when you half-kill them, your sins are much worse. All the animals you have tortured and killed will return the pain to you. One after another, they will torture and kill you—in your next life and in life after life.”

Although he was grossly sinful, by associating with the saintly Narada Muni Mrgari realized his sins, repented, and became purified. “My dear sir,” the hunter pleaded, “when I was very little my father taught me to half-kill animals. Please tell me how I can get rid of all the sinful reactions I’ve been piling up over the years. Now I give myself up to you and fall down at your holy feet. Please save me from my sinful reactions. Please show me the path to freedom.”

Narada told the hunter, “If you actually hear and follow my instructions, I can show you the real path to freedom.”

“All right…First of all, break your bow. Then I will show you how you can be free.”

Narada assured the hunter, “There is no need to worry. Just follow my instructions. You won’t have to kill animals. I’ll send you enough food to feed both you and your wife. I’ll make sure you have all you need. When you surrender to the Lord, He takes special care of you.”

Trusting the saintly Narada, the hunter broke his bow and fell at his feet, and he surrendered himself totally. With a kind hand Narada raised the hunter and began instructing him.

“Just go back to your home and give away whatever you have to the Lord’s devotees. Then, wearing only simple clothing, you and your wife should leave home. On the riverbank build a small thatched house, and in front of it grow the sacred tulasi plant on a raised platform. The tulasi plant is a pure devotee of the Lord and adorns His lotuslike feet. The Lord will be very pleased with you if you always serve His pure devotee with water and other things, and if you always chant His holy names—Hare Krishna, Hare Krishna, Krishna Krishna, Hare Hare/ Hare Rama, Hare Rama, Rama Rama, Hare Hare. As for your living, perform your daily duties, and every day I’ll send enough food for both of you. You can take as much as you need.”

Then Narada restored the half-dead animals. Saved from their ordeal, the animals fled. When he saw the pure devotee Narada work this miracle, Mrgari marveled. Humbly he bowed to Narada. At last, Mrgari returned home to carry out Narada’s instructions, and Narada himself proceeded to Allahabad.

Once we understand the dangers of sinful life, we should give it up with sincerity and sorrow—just as Mrgari did. We should surrender to the Supreme Lord—that is, we should follow the instructions of His pure devotee. Only then can we be free from our sinful reactions and start to serve the Lord. Sometimes people make some atonement and then knowingly commit the same sins again. The scriptures compare such atonement to an elephant’s bathing. An elephant takes a thorough bath, but as soon as it comes out of the water, it throws dirt all over its body. To become free from all sinful reactions, we must follow the instructions of an authentic spiritual master. As Jesus Christ said, “If you love me, keep my commandments.” The Supreme Lord gives His pure devotee the power to deliver anyone who follows the principles of devotional service—avoid intoxication, gambling, illicit sex, and meat-eating; and chant the holy names of the Lord. 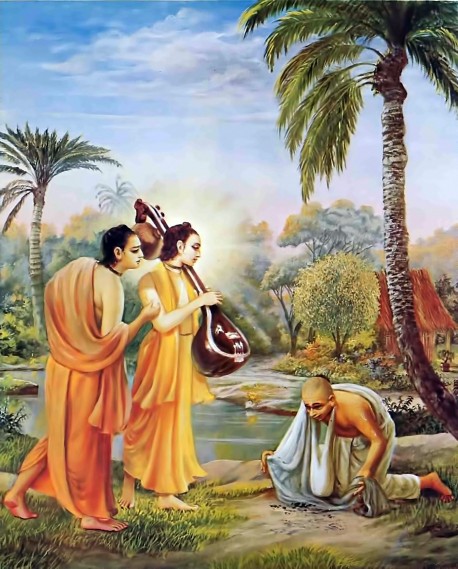 …Slowly and gently, the hunter cleared the ants away with a cloth.

So Mrgari exactly followed the instructions of Narada, his spiritual master. The news spread that the pure devotee Narada had changed Mrgari from sadist to saint. The villagers were astonished when they came to see the new devotee. According to spiritual custom, whenever people go to see a saintly person they should bring grains and fruit. And since all the villagers saw that Mrgari had turned into a great devotee, they brought such eatables with them. Each day the people brought the former hunter so much grains and fruit that ten or twenty people could have eaten their fill. Yet, following Narada’s instructions, Mrgari took only what he and his wife needed.

After some days had passed, Narada was talking with his friend, the sage Parvata. Narada told him, “I have a disciple who was formerly a hunter. Let’s go to see him.” The two sages journeyed to the hunter’s home. When Mrgari saw his spiritual master coming in the distance, he began running quickly toward him. On the way the hunter caught sight of many ants scurrying around his own feet. He wanted to bow down before Narada and Parvata, but he saw that if he did so he would crush some of the ants. So, slowly and gently, Mrgari cleared the ants away with a cloth. At last he fell down flat to honor his spiritual master.

“My dear hunter,” Narada beamed, “your new-found nonviolence doesn’t surprise me. People who perform devotional service to the Blessed Lord are naturally nonviolent. They see the Lord living within the heart of everyone—even the tiny ant—so they never hurt any living being out of envy.”

Mrgari received both great sages in the courtyard of his home. He spread out a straw mat for them to sit on, and with great devotion he made them comfortable. Then he fetched water, and with deep affection he washed the sages’ feet. Both the hunter and his wife sprinkled the wash water over their heads. Filled with love for the Lord, Mrgari began chanting Hare Krishna, Hare Krishna, Krishna Krishna, Hare Hare/Hare Rama, Hare Rama, Rama Rama, Hare Hare. His body trembled, and tears welled in his eyes. He raised his hands and danced in ecstasy.

After seeing the hunter’s ecstasy, Parvata told Narada, “You are a touchstone—you have turned iron into gold. My dear Narada, you are really glorious. How pleased Krishna must be with you! By following your instructions, even the lowest person—a hunter of animals—can quickly come to the path of devotion to the Blessed Lord.”

Narada then asked the hunter, “My dear Mrgari, are you getting enough food every day?”

The hunter replied, “My dear teacher, everyone you send gives me something when he comes to see me. You send many people, and they bring so much that we don’t know what to do with all the food. Do you think you could tell the people to bring enough only for two?”

The hunter was following his spiritual master’s instructions with utter sincerity, and Narada showered him with well-wishes.

“May Krishna always bless you. And may you always please the Lord with your sincere devotional service.”

4 Responses to From Sadist to Saint