Thanks to the Government of India 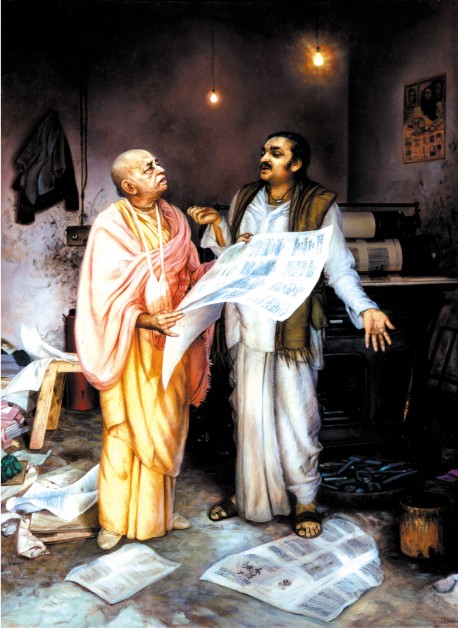 Readers of ‘Back to Godhead’ who were practically disappointed to learn that the Government of India had twice refused to give permission for the continuance of publication of “Back to Godhead”, will be glad to know and see that in the third attempt by their humble servant, the Government of India has kindly given special permission to continue the publication of ‘Back to Godhead’. We have already conveyed our sincere thanks to the Government of India for allowing us to serve the purpose of His Divine Grace Sree Sreemad Bhakti Siddhanta Saraswati Goswami Moharaj and we can now assure to our numerous readers and patrons that “Back to Godhead” will continue to be published in each and every month regularly. Extracts from the text of the last correspondences that passed between the Government of India and your humble servant, which resulted in the re-appearance of “Back to Godhead” is given herewith:—”Sir, with due respect, I beg to submit that under instruction of His Divine Grace, Sri Srimad Bhakti Siddhanta Saraswati Goswami Moharaj, the spiritual head of the Gaudiya Vaishnavas, I had to start a paper under the caption,—”Back to Godhead”. The very name will suggest the intention of starting such a paper in the midst of heavy turmoil through which the world is now passing. A copy of the same booklet is sent herewith for your kind perusal. In that booklet you shall find strong world opinions, even by many reputed politicians all over the world,—in favour of such a movement to bring back the world,—into sanity by training the mind and educating human nature for the unshaking spiritual plane, considered to be the supreme need of human kind. I hope you will kindly go through the paper by making some time and I may draw your attention specially to the introductory portion.

“Permission was sought from the Secretary of the Department of Industries and Civil Supplies for starting the paper as a monthly magazine, but as usual, the permission has not been granted for scarcity of paper. But in the opinion of the Editorial Board of “Back to Godhead” amongst whom there are many erudite secular scholars, Sanyasins and self-sacrificed souls,—there is not so much scarcity of paper as much there is scarcity of education.

“We believe that the ultimate supplier is the Personality of Godhead. He supplies everything through His Material Agent the Nature for the benefit of living entities, but Godless creatures think that they are the proprietors of things which is madness and illusion. Catastrophe that is now in vogue in the present war of supremacy, is guided by this false sense of proprietorship and therefore there is need of making propaganda amongst all human beings, in order to bring them back to the sense of the ultimate proprietorship of Godhead of everything and we are simply allowed to handle things in order to give bonafide service to the ultimate Proprietor.

“For the scanty supply of electric light and air conducted by the electric fan, the power of which is after all borrowed from the treasure house of Nature, we have to pay heavily to the supplying agent but we do not think for a moment that we must pay at least something to the Ultimate Supplier for the immense store of light and air without which we cannot live for a moment.

“Scarcity of paper there is, that any sane man can understand and as such we can also understand the same; but we can understand another thing also why there is so much scarcity all around which the Secretary could not possibly follow. In ancient time, the enlightened Indians would sacrifice tons and tons of valuable quality of Ghee in the fire, knowing well the productive economic laws, but not foolishly as we think but for a greater benefit of humankind which the world has yet to learn from India. By sacrificing tons and tons of Ghee for the Jajnas there was hardly any scarcity in the then society of India but at present abandonment of such sacrifices for God’s sake, dictated by modern productive economic laws, has produced nothing but scarcity all round.

“Can we not therefore sacrifice a few reams of paper in the midst of many wastages, for the same purpose in order to derive greater benefit for the humankind? I request that the Government should take up this particular case in the light of spiritualism which is not within the material calculation. Even in Great Britain the Government has immensely supported a similar movement called the Moral Re-Armament Movement without consideration of the scarcity of paper which is more acute there than here.

“Let there be a page only if not more for the publication of Back to Godhead for which we do not mind but my earnest request is that the Government should at least let there be a ventilation of the atmosphere for which my paper “Back to Godhead” meant. Kindly therefore give it a serious consideration and allow me to start it even by one page every weekly or monthly as you think best without thinking it as ordinary waste of paper, for the sake of humanity and Godhead.

“I hope most faithfully that you shall pass order sanctioning the publication of this most important transcendental message and oblige.

“Thanking you in anticipation,

I have the honour to be
Sir,
Your most obedient Servant,
(Sd.) ABHAY CHARAN DE,
Editor & Founder Back to Godhead.

“Sir, With reference to your letter dated the 10th July 1944, I am directed to say that on reconsideration the Government of India are pleased to grant permission as a special case for the continuance of publication of the magazine “Back to Godhead” and to allot a ration of ………………… of news print per month for the same.

I have the honour to be,
Sir,
Your most obedient Servant,
Sd. D. HEJMADI,
Paper Officer.

“Sir, With due respect I, on behalf of the editorial board of my paper, beg to convey thanks to you and through you to the Government of India for kindly reconsidering my application of the 10th July and subsequently passing order for the continuance of publication of my paper—”Back to Godhead”. This favour has immensely helped us in carrying on the orders of our spiritual Master His Divine Grace Sree Sreemad Bhakti Siddhanta Saraswati Goswami Moharaj and therefore His Divine Grace’s blessings are due to you. May God bless you with spiritual mentality for all the days to come,”

I have the honour to be,
Sir,
Your most obedient Servant,
Sd. ABHAY CHARAN DE.