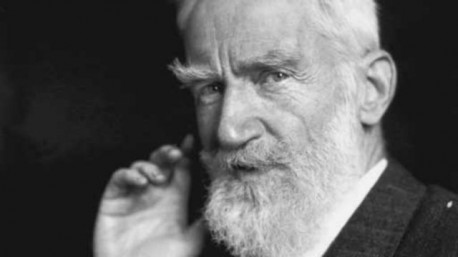 Mr. Bernard Shaw has congratulated Mahatma Gandhi on the occasion of the latter’s 76th birthday in the following words:—”I can only wish this were Mr. Gandhi’s 35th birthday instead of his 76th.” We heartily join with Mr. Shaw in his attempt to subtract 41 years from the present age of Mahatma Gandhi. Everyone tries to subtract at least some years from his calculated age and this attempt of increasing duration of life within the mind is quite natural for an ordinary cult of man. The psychology of such artificial way of increasing life’s duration is that everyone of us does not wish to die. But death is so cruel that it does not respect our wishful desire. It comes when it must and any amount of our worldly acquisition cannot protect us from the cruel hands of death. Mr. Shaw or Mahatma Gandhi both are distinguished thinkers and lead the world in respect of many things. There are other great men and scientists who are equally respected leaders of thought in the world but none of them has ever tried to solve the question of death which none of us, beginning from Mr. Shaw to the man in the street, desires. The leaders of nations have however opened many factories for manufacturing weapons for the art of killing but none has opened a factory to manufacture weapons for protecting man from the cruel hands of death, although our wishful desire is always for not to die.

A layman may ask why the leaders of the world have set aside such a big problem and are engaged in the temporary arrangement of dal bhat which are lavishly produced by nature’s own way but extremely mismanaged in distribution by the leaders of men. While the dal bhat problem is solved by nature’s own production, the leaders of men may pause for a while and can see their way if the big question of death can be solved. There is a suggestion, however, in the Bhagawat Geeta which solved the death question without wishful desire to live by subtracting ages. The suggestion is this (Bg. 8.16)

‘Oh son of Kunti! the world (planets) up to the Brahmaloka, are all destructible but one who attains to Me, has no more to take his birth.’

The Kingdom of God is non-destructible and one who enters there does not come back to this region of death. This verdict is confirmed by all the scriptures of the world. If there is at all any such abode where death does not take place—why the leaders of nations should cling to the earth of the land of their birth where death is inevitable? They should now combine and make research if there is at all such a place. We wish that in their ripe old age, Mr. Shaw and Mahatma Gandhi will make combined effort to educate men to learn how to go back to home, back to Godhead.