Back to Godhead > ISKCON > Gurukul > Higher Education — “What, No Television?”

Higher Education — “What, No Television?”

Children in Krsna consciousness are among the very few who
rarely (if ever) watch television—and who don’t miss it. 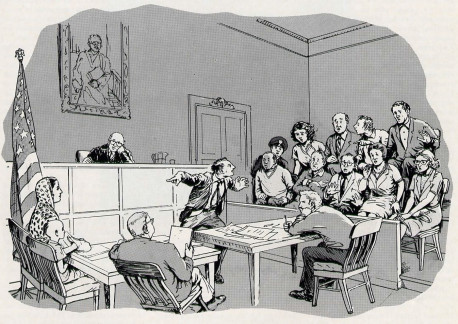 The courtroom hushed as he faced the jury and pointed a long, manicured finger at the defendant, an attractive young woman who sat calmly turning her prayer beads. The prosecution was offering summary remarks in a trial to determine custody of the woman’s seven-year-old son David, then enrolled at a Krsna conscious secondary school. The boy’s divorced father had demanded that she remove their son from the school or else relinquish custody. She refused to do either.

The prosecution listed some of the shocking facts about the life of children in Krsna schools: they ate no meat, rose early every morning for temple services, and learned that man did not descend from the apes. And then came the clincher: “They don’t even watch television.”

A buzz swept through the gallery as astonished witnesses and visitors realized the full meaning of these words.

Nonetheless, the jury found the boy healthy and happy and allowed the mother to retain custody. They could find nothing objectionable in the boy’s diet. In fact, two doctors testified that it was one of the healthiest imaginable. Religious observances each morning appeared to have done the boy no harm. As for evolution, the boy himself provided a rather remarkable slice-up of Darwin’s theories.

And what about the television? He said he didn’t mind not having it.

“Then what do you do?” they asked him.

“I play with my friends,” he said, “and I go to Krsna farms on weekends and learn about planting crops and how trees have feelings and how to milk a cow. I also like to play the mrdanga drum and chant Krsna’s names.”

His teacher gave more information about his studies and extracurricular activities. Like many of his classmates, he had a reading level three grades above that of his counterparts in public schools and a math proficiency two grades higher. He was as mischievous as any other child his age, she said, but he remained respectful to teachers and elders, was sorry his father wouldn’t come to visit, and wrote to him once a week.

This little boy’s case was exceptional, in that Krsna children usually have contact with both their parents. Separation, especially at an early age, is not the practice in Vedic culture. What was not exceptional for Krsna children was the absence of television. TV programs offer little for people who are growing up spiritually. Devotee children have more satisfying forms of entertainment that engage them physically and intellectually. And even though the use of television sets is not in itself objectionable to devotees, the content of the programs—even carefully selected ones—is generally incompatible with spiritual education. Krsna conscious children don’t need electronic “aids” to enhance their interest in study, and the children themselves say television programs seem “made up” and boring.

Isvara Puri dasa is six and a half years old and has seen television programs when visiting family members. His parents are both devotees. “I don’t like when they show people killing,” he explains. “If you kill someone, you have to suffer yourself from the karma. There should be shows about Krsna, so that kids can become purified. otherwise, they’ll do nonsense like killing and have to suffer.

“I never liked Mickey Mouse’s body,” he says. “It isn’t true. It’s invented. When I was younger, I liked television, but my intelligence is better developed now. Besides, Krsna things are even funnier than television.”

Madhavi’s parents are also devotees, but she was already seven years old when they entered Krsna consciousness. Now Madhavi is nine. “I suppose I liked television before becoming a devotee, but I was seeing with materialistic eyes. I don’t like it any more, because I know it’s an illusion. Things aren’t really like that, and they always talk about cigarettes, gum, eating meat—things that aren’t good for you. And you forget Krsna when you watch television.”

Devotee parents and teachers help children avoid vidiocy by providing a daily schedule filled with color and variety. Morning and evening services are particularly satisfying. The services bring the devotional community together for chanting and dancing before the Krsna Deity. The Deity receives fresh garlands each morning, and the previous day’s flowers are distributed to the children and guests. Near the altar the children have a special place reserved for them, so that they can get a closer view of Krsna’s beautiful decorations. The children also greet newcomers, help in cooking, take part in Sunday feasts and monthly festivals, and enjoy frequent outings with their classmates.

“Do you like your studies, David?” the defense counsel asked.

“Sure. Even in math and spelling we talk about Krsna. In history we learn about what happened a long time ago in India when the government was God conscious, and then we talk about how it’s different now. “

“Before, David, you said you don’t miss television. What do you do instead for fun?”

“We go places and do plays every week. We play different incarnations of Krsna, like Lord Rama, and we dress up in costumes, and on Sunday we do the play for the guests and devotees at the feast. I like to play Rama’s monkey warrior Hanuman, because he’s strong and a great devotee.” No one wanted to argue that watching cartoon characters parade across a television screen was “more constructive.”

There is no objection among devotees to television per se, since it can be used to broadcast the message of Krsna consciousness. Devotees even staff a video department that offers taped lectures and plays. Using technology in Krsna’s service is not a break with religious tradition but, rather, a demonstration that everything—including machinery—is God’s energy and can be used for devotional purposes. Some religionists in India refuse even to wear watches, because they consider the lubricating oil contaminating. Krsna devotees recognize, however, that when one is properly trained to engage everything in God’s service, such extremes are unnecessary.

“The objection is not the medium but the message,” David’s mother explained. “The Krsna culture holds certain values in great esteem that commercial television shows neglect: chastity, respect for life in all its forms, minimizing material needs, controlling the mind and senses. I read recently that by the time a schoolchild in this country graduates from high school he will have spent eleven thousand hours in school and fifteen thousand in front of the television. Those thousands of hours don’t do a thing for the child’s spiritual development. I don’t find it necessary for David, and he has made no objection.”

David’s mother also indicated that the kinds of foods promoted on the network stations were contrary to David’s diet, which calls for strictly vegetarian foods offered to God. “In his school and at home David really relishes eating devotional meals. He has no interest in junk foods. And whenever he sees nondevotee children eating meat, he tries to tell them why it is wrong. ‘You have to kill the animal,’ he says. ‘Do you believe in killing?’ He convinces some of them to think about what they do and eat, instead of just following what they see on television.”

The absence of television has helped devotee children cultivate alternative interests. David and many of his classmates, for example, are voracious readers, something which has greatly accelerated their spelling, writing, and concentration. The girls, although attentive to their appearance, are indifferent to fashion and glamor and prefer to learn devotional arts such as cooking, Deity sewing, music, and dance.

For role models, devotee children prefer persons of high moral and religious character over the stereotyped heroes and heroines of the screen. The ambitions the children espouse are not wealth, fame, or success in business, even though their teachers don’t deprecate these things. Instead, the children speak of becoming better devotees of Krsna and helping others develop their love for Him.

One day, after the custody hearings had adjourned, a visitor approached the devotee mother and asked whether perhaps David were not isolated from society by not watching television.

“As a parent,” she replied, “I see certain elements of this society that I want David to remain isolated from, and television is one of them.”

With 19.5 scenes of violence per hour, who can blame her?