Bhaktitirtha Swami Returns from Africa — Every Town and Village 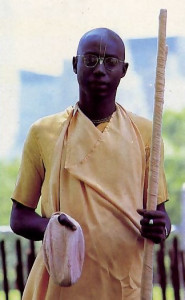 “Much of Africa’s population accepts reincarnation,” he explained. “And because Africans have a tradition of sitting and hearing from spiritual authorities, my lectures were well received. People there hear the message of the Bhagavad-gita and feel that it clarifies beliefs they have long held. Our contribution is a scientific explanation of phenomena they have accepted for centuries, without understanding how or why.”

Among Bhaktitirtha Swami’s programs were an address at the National Arts Council in Accra, Ghana, that country’s largest cultural center, and an appearance on television in Lagos, Nigeria. The programs were arranged by His Holiness Brahmananda Swami, who has been in Africa preaching Krsna consciousness for the last ten years.

“People there are very eager to have books on meditation and yoga,” Bhaktitirtha Swami said. “They practically bombard us with questions, stopping us at street lights, in stores.”

Often living in villages as guest of honor in the homes of chiefs and elders, Bhaktitirtha Swami saw many cultural parallels between the African heritage and that of the Vedic, Krsna conscious culture. “Much of Africa is very Eastern,” he noted. “The family life, diet, respect for authority, spiritual beliefs . . . and the similarities with Krsna consciousness are greatly appreciated. Rather than propose a change of culture, as the Christian missionaries did, Krsna consciousness suggests that people continue with their own culture and simply add an understanding of the scientific process of devotional service, as described in the Bhagavad-gita”

Bhaktitirtha Swami joined the International Society for Krishna Consciousness in 1972 and accepted sannyasa. the order of renounced life, in 1979. He holds a degree in psychology from Princeton, where he was president of the Student Council and of the Third World Coalition. Before joining ISKCON he was the director of seven drug-abuse programs for the city of Cleveland and director of several penal reform projects for the state of New Jersey.

“I have read with pleasure and profit the English translation of Srimad-Bhagavatam by His Divine Grace A.C. Bhaktivedanta Swami Prabhupada. This Bhagavata Mahapurana, considered in Vaisnava tradition a word image of Bhagavan Sri Krsna, has served as a touchstone of scholarship through the ages. As an aggregation of spirituality and devotion, it has been the main source of the philosophical tenets of the various schools of Vaisnavism. It is really gratifying to note that Srila Bhaktivedanta Swami Prabhupada has performed the tremendous task of translating into English, adding purport and esoteric interpretation, this basic text of Vaisnavism in several volumes. Indian religion and Indology both will remain indebted to Srila Prabhupada for making Vaisnava thought and philosophy available round the world through the translation of this text. I do not find adequate words to express my joy and appreciation of this excellent edition.”—Professor Rasik Vihari Joshi, Head of the Dept. of Sanskrit, University of Delhi, India.

Bombay—Recently Society magazine said this about the local branch of Govinda’s Restaurant: “For the absolute yogic saints, the great souls who eat only vegetarian food in pure goodness, we have discovered the place, where both the food and the lingering fragrance of sandalwood seem to guarantee your instant nirvana. Govinda’s is a vegetarian restaurant managed by the disciples of the Hare Krishna movement at their ashram in the Juhu Beach area. Not only do they provide the most reasonably priced vegetarian plate cooked in pure clarified butter, but there is surely a divine hand in the preparation of their delicious menu.”