Sri Caitanya Mahaprabhu unleashed
a spiritual revolution and a tidal wave of love. 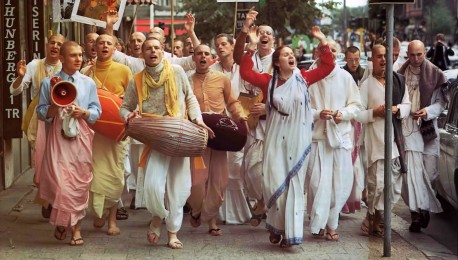 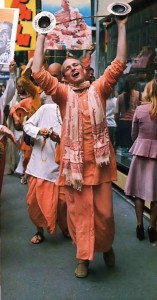 THE FIRST TIME devotees of Krishna took their chanting to the street was in India five hundred years ago. Except for religious holidays it had never been done before, but on this occasion in the city of Navadvipa, West Bengal, it had to be done.

Most of the people in Navadvipa joined the Sankirtana movement as soon as Lord Caitanya Mahaprabhu began it. He recommended always chanting the names of God, and they readily took up the practice. Especially in the evenings, households rang with the cheerful music of devotion.

However, both Hindu and Muslim partisans came before the district’s governor, Chand Kazi, complaining that the devotees’ singing was too loud for them. The Kazi reacted to the complaints by bursting into a home, angrily breaking a drum and prohibiting any further chanting.

Sri Caitanya Mahaprabhu boldly retaliated, ordering Sankirtana groups brought into the streets for a mass march through all the neighborhoods of the city. On the appointed night, tens of thousands of devotees streamed through Navadvipa in a torchlight parade. With Lord Caitanya leading they made their way to the governor’s mansion, chanting and dancing with great enthusiasm.

Hearing the chanting throng, the Kazi immediately hid himself in the upstairs quarters of his home. When some local notables were sent to get him, however, he came outside to meet the crowd. He and Lord Caitanya exchanged pleasantries, then launched into an extensive philosophical discussion. The Kazi finally confessed an affection for the new devotional style, and was moved to proclaim, “To as many descendants as take birth in my dynasty in the future, I give this grave admonition: no one should check the Sankirtana movement.”

Five hundred years after that initial success, Lord Caitanya’s Sankirtana movement is flourishing. Public chanting of the holy names of God is now commonplace in the streets of cities throughout the world, and Lord Caitanya’s famous prediction, “In every town and village the holy name will be sung,” is quickly being fulfilled. 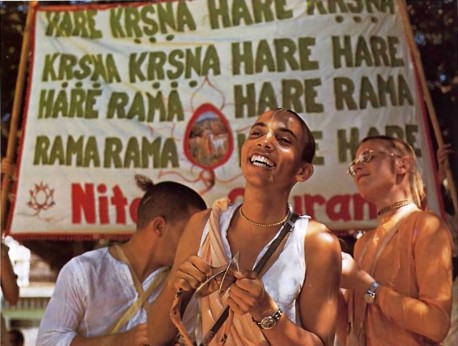