Back to Godhead > Krishna > The Gopis Enchanted by the Flute

The Gopis Enchanted by the Flute 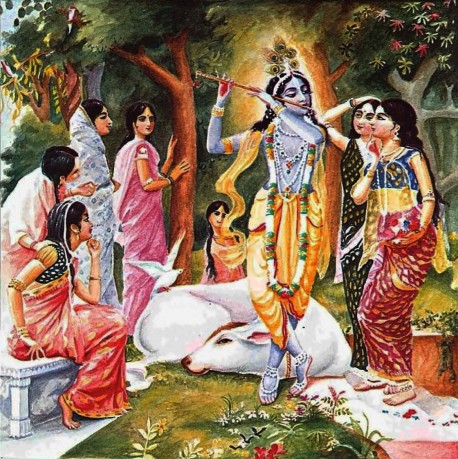 An excerpt from Krishna,
the Supreme Personality of Godhead,
by His Divine Grace A. C Bhaktivedanta Swami Prabhupada

Krishna was very pleased with the atmosphere of the forest, where flowers bloomed and bees and drones hummed very jubilantly. While the birds, trees and branches were all looking very happy, Krishna, tending the cows and accompanied by Sri Balarama and the cowherd boys, began to vibrate His transcendental flute. After hearing the vibration, the gopis in Vrndavana remembered Him and began to talk amongst themselves about how nicely Krishna was playing His flute. When the gopis were describing the sweet vibration of Krishna’s flute’; they also remembered their pastimes with Him; thus their minds became disturbed, and they were unable to fully describe the beautiful vibrations. While discussing the transcendental vibration, they also remembered how Krishna dressed, decorated with a peacock feather on His head, just like a dancing actor, and with blue flowers pushed over His ear. His garment glowed yellow-gold, and He was garlanded with a vaijayanti necklace. Dressed in such an attractive way, Krishna filled up the holes of His flute with the nectar emanating from His lips. So they remembered Him, entering Vrndavana forest, which is always glorified by the footprints of Krishna and His friends.

Krishna was very expert in playing the flute, and the gopis were captivated by the sound vibration, which was not only attractive to them, but to all living creatures who heard it. One of the gopis told her friends, “The highest perfection of the eyes is to see Krishna and Balarama entering the forest and playing Their flutes and tending the cows with Their friends.” 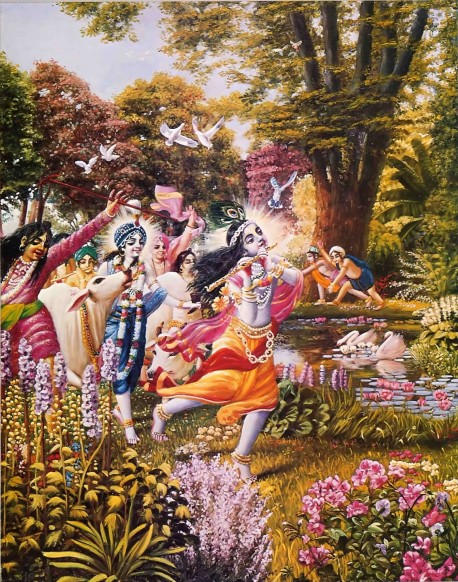 “The highest perfection of the eyes is to see Krishna and Balarama entering the forest and playing Their flutes and tending the cows with Their friends.”

Persons who are constantly engaged in the transcendental meditation of seeing Krishna, internally and externally, by thinking of Him playing the flute and entering the Vrndavana forest, have really attained the perfection of samadhi. It is also confirmed in the Bhagavad-gita that anyone who is always absorbed in the thought of Krishna is the topmost of all yogis.

Another gopi expressed her opinion that Krishna and Balarama, while tending the cows, appeared just like actors going to play on a dramatic stage. Krishna was dressed in glowing garments of yellow, Balarama in blue, and They held new twigs of mango tree, peacock feathers, and bunches of flowers in Their hands. Dressed with garlands of lotus flowers, They were sometimes singing very sweetly among Their friends. One gopi told her friends, “how is it Krishna and Balarama are looking so beautiful?” Another gopi said, “My dear friend, we cannot even think of His bamboo flute—what sort of pious activities did it execute so that it is now enjoying the nectar of the lips of Krishna?” Krishna sometimes kisses the gopis; therefore the transcendental nectar of His lips is available only to them, and His lips are considered their property. Therefore the gopis asked: “How is it possible that the flute, which is nothing but a bamboo rod, is always engaged in enjoying the nectar from Krishna’s lips? Because the flute is engaged in the service of the Supreme Lord, the mother and the father of the flute must be happy.”

The lakes and rivers are considered to be the mothers of the trees because the trees live simply by drinking water. The waters of the lakes and rivers of Vrndavana were full of happy lotus flowers because the waters were thinking, “How is it that our son, the bamboo rod, is enjoying the nectar of Krishna’s lips?” The bamboo trees standing by the banks of the rivers and lakes were also happy to see their descendant engaged in the service of the Lord, just as persons advanced in knowledge take pleasure to see their descendants engage in the service of the Lord. The trees were overwhelmed with joy and were incessantly yielding honey, which flowed from the beehives hanging on their branches.

Sometimes the gopis spoke about Krishna to their friends: “Dear friends, our Vrndavana is proclaiming the glories of this entire earth because this planet is glorified by the lotus footprints of the son of Devaki. Besides that, when Govinda plays His flute, the peacocks immediately become mad. When all the animals, trees and plants—either on top of Govardhana Hill or in the valley—see the dancing of the peacock, they all stand still and listen to the transcendental sound of the flute with great attention. We think that this boon is not possible or available on any other planet.” Although the gopis were village cowherd women and girls, they had knowledge of Krishna. Similarly, one can learn the highest truths simply by hearing the Vedas from authoritative sources.

Another gopi said, “My dear friends, just see the deer! Although they are dumb animals, they have approached Krishna, the son of Maharaja Nana. Not only are they attracted by the dress of Krishna and Balarama, but as soon as they hear the playing of His flute, the deer, along with their husbands, offer respectful obeisances unto the Lord by looking at Him with great affection.” The gopis were envious of the deer because the deer were able to offer their service to Krishna along with their husbands. The gopis thought themselves not so fortunate because whenever they wanted to go to Krishna, their husbands were not very happy.

Another gopi said, “My dear friends, Krishna is so nicely dressed that He appears to be the impetus for various kinds of ceremonies held by the womenfolk. Even the wives of the denizens of heaven become attracted after hearing the transcendental sound of His flute. Although they are traveling in their airplanes, enjoying the company of their husbands, upon hearing the sound of Krishna’s flute they immediately become perturbed. Their hair loosens and their tight dresses slacken.” This means that the transcendental sound of the flute of Krishna extended to all corners of the universe. It is also significant that the gopis knew about the different kinds of airplanes flying in the sky.

Another gopi said to her friends, “My dear friends, the cows are also charmed as soon as they hear the transcendental sound of the flute of Krishna. It sounds to them like the pouring of nectar, and they immediately spread their long ears just to catch the liquid nectar of the flute. As for the calves, they are seen with the nipples of their mothers pressed within their mouths, but they cannot suck the milk. They remain struck with devotion, and tears glide down their eyes, illustrating vividly how they are embracing Krishna heart to heart.” These phenomena indicate that even the cows and calves in Vrndavana knew how to cry for Krishna and embrace Him heart to heart. Actually, Krishna conscious affection is culminated in shedding tears from the eyes.

A younger gopi told her mother, “My dear mother, the birds, who are all looking at Krishna playing on His flute, are sitting very attentively on the branches and twigs of different trees. From their features it appears that they have forgotten everything and are engaged only in hearing Krishna’s flute. This proves that they are not ordinary birds; they are great sages and devotees, and just to hear Krishna’s flute they have appeared in Vrndavana forest as birds.” Great sages and scholars are interested in Vedic knowledge, the essence of which is stated in the Bhagavad-gita: vedais ca sarvair aham eva vedyah. Through the knowledge of the Vedas, Krishna has to be understood. From the behavior of these birds, it appears that they were formerly great Vedic scholars who took to Krishna’s transcendental vibration and rejected all branches of Vedic knowledge. Even the River Yamuna, being desirous to embrace the lotus feet of Krishna after hearing the transcendental vibration of His flute, broke her fierce waves to flow very nicely with lotus flowers in her hands, to present them to Mukunda with deep feeling.

The scorching heat of the autumn sun was sometimes intolerable, and therefore out of sympathy the clouds in the sky appeared above Krishna, Balarama and Their boy friends while They engaged in blowing Their flutes. The clouds served as a soothing umbrella over Their heads just to make friendship with Krishna.

Krishna and Balarama carried binding ropes on Their shoulders and in Their hands, just like ordinary cowherd boys. While milking the cows, the boys bound their hind legs with a small rope. This rope almost always hung from the shoulders of the boys, and it was not absent on the shoulders of Krishna and Balarama. In spite of Their being the Supreme Personality of Godhead, They played exactly like cowherd boys, and therefore everything became wonderful and attractive. While Krishna was engaged in tending the cows in the forest of Vrndavana or on Govardhana Hill, the gopis in the village were always absorbed in thinking of Him and discussing His different pastimes. This is the perfect example of Krishna consciousness: somehow or other to remain always engrossed in thoughts of Krishna. The vivid example is always present in the behavior of the gopis. Therefore, Lord Caitanya declared that no one can worship the Supreme Lord better than by the method of the gopis. The gopis were not born in very high brahmana or ksatriya families. They were born in the families of vaisyas—not big mercantile communities, but the families of cowherd men. They were not well educated, although they heard all sorts of knowledge from the brahmanas—authorities of Vedic knowledge. The gopis’ only purpose was to remain always absorbed in thoughts of Krishna.