Srila Prabhupada Speaks Out on Illicit Sex and Public Opinion

On Illicit Sex and Public Opinion

The following conversation between His Divine Grace A.C. Bhaktivedanta Swami Prabhupada and a social worker took place in Melbourne, Australia.

Social worker: I deal with divorce cases and adoption. Nowadays it has become very easy to get a divorce. 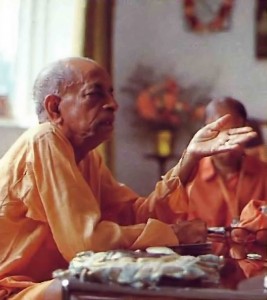 Srila Prabhupada: So, the first defect of today’s leaders is that they allow divorce. That is very dangerous for society, because it encourages illicit sex.

Srila Prabhupada: Society is just like a child. If a child wants to go to hell, should the father allow it? Society may want so many nonsensical things, but it is the duty of the government to know how to uplift the citizens.

Social worker: It would be impossible for my department to teach…

Srila Prabhupada: It’s not impossible. Simply the government does not know how to do it. That is another defect—there is no method for training first-class members of society. But the ideal man is described in the Bhagavad-gita, and. we are training our men to that standard. That is the purpose of the Krishna consciousness movement. Now there are no ideal men in the society, because you allow the young people to commit all kinds of sinful activities. Yesterday I was talking with a priest about illicit sex life. He said, “What is the harm? It is a great pleasure.” But my first condition before accepting a disciple is that he must give up illicit sex, meat eating, intoxication, and gambling.

Social worker: But the people you can train will be only a tiny percentage of the population.

Srila Prabhupada: Yes, but example is better than precept. If even one percent of the population is trained as ideal men, the other ninety-nine percent will see and follow. But that example is lacking in society today. Even the priests have become licentious, and thousands of priests are going to the hospital to cure their drinking habit. They are sanctioning homosexuality. In a Christian newspaper I read about a priest even performing marriage between two men. So outside of this Krishna consciousness movement, I don’t find any group of ideal men. Therefore, if you want to help society, you must learn from us how to train men of ideal character.

Social worker: What you call “ideal character” is only your opinion. It may not be ideal to someone else.

Srila Prabhupada: No, it is not my opinion—it is the verdict of the sastra[scripture]. Opinion—what is the value of opinion when the people are like dogs and asses? What is the use of taking the opinion of an ass? This vox populi—taking the opinion of the public—is degrading modern society. If the public is composed of drunkards, smokers, meat eaters, gamblers, and woman hunters, then what is the value of their opinion? Why take the opinion of fourth-class men? What Krishna says—that is the standard. Krishna is the supreme, and His version is final. No other opinion is allowed. When I introduced the principle “No illicit sex life,” I didn’t ask for opinions—”It must be done.”

Social worker: You don’t think the people have any mind of their own?

Srila Prabhupada: Yes, they have a mind, just like a madman has a mind. But what is the value of his mind? Are you going to take the opinion of a madman? The Bhagavad-gita says, mayayapahrta-jnana: “The miscreant’s knowledge has been taken away by maya [illusion]; therefore, his mind is distorted.” So a madman’s opinions have no value.

Social worker: Our business is to look after those who are in trouble.

Srila Prabhupada: At the present moment even the government leaders are in trouble.

Social worker: Well—that is not part of our public…

Srila Prabhupada: Why don’t you send your supervisor to us for training? These leaders are also drunkards, woman hunters, meat eaters, and gamblers.

Social worker: You want to change the whole society!

Srila Prabhupada: Unless you change the society, how can you do social welfare? If you keep society in the same condition it is in now, then where is the question of social welfare? You are working with the public, and we are also working with the same people. We take the same people—those addicted to drinking, addicted to prostitution, addicted to meat eating—and we make them into saintly persons. So our method is practical. You can see what their previous history was, and what they are now. You must train up one class of men like them—men of ideal character.

Srila Prabhupada: So the public elects a President Nixon, and then they drag him out of office. This is your public opinion.

Social worker: Yes, that is how the society works. If you change society, then we must change. I do what I’m asked; otherwise, I’ll lose my job.

Srila Prabhupada: Our program is not vox populi. We are saying only what the authoritative scriptures say. If you actually want to do social welfare, then you must take to the standard formula as given in the scriptures. In the Bhagavad-gita Krishna explains how one can become peaceful—a first-class man. But if you don’t accept His authority—if you’d rather follow public opinion—you will never be successful. You want to make a peaceful society, but you do not know how. Therefore you must adopt this process of Krishna consciousness. If anyone—even a madman—agrees to follow our principles, then he can become peaceful. He can become a first-class man.

Social worker: How do you explain the fact that you are such a small percentage of the population?

Srila Prabhupada: In the sky there are so many stars, but there is only one moon. In terms of percentage, the moon is nothing. But in terms of its value, the moon is far more important than all the stars combined. So in our Krishna consciousness movement, our aim is to educate a few men of ideal character. If you and other leaders of society support this movement, you will be performing the highest social welfare.

Social worker: The head of the Social Welfare Bureau is also a servant of the people.

Srila Prabhupada: That is the defect: the people are rascals, and they elect another rascal. But the Krishna consciousness movement will go on without depending on these rascals. We are publishing our books, we are spreading our movement, and we are training first-class men. For example, we don’t prohibit sex, but we say, “No illicit sex.” Have you any objection?

Social worker: Yes, a private one.

Srila Prabhupada: You have illicit sex?

Social worker: Yes, I couldn’t live without it.

Srila Prabhupada: Just see! This is the defect in society. You are like a patient who wants treatment from a physician, but who at the same time wants to continue with his diseased activities. You have failed to help society, therefore you have come to me for help with your social welfare work. So why do you reject my advice? If you reject the medicine prescribed by the physician, you will not be cured. But when I give you the prescription, you want the other patients to vote on it first. Daily one or two gentlemen like you visit me. They also find our prescription very strict. But we are not going to change it.

Social worker: Well, I do believe you should maintain a standard.

Srila Prabhupada: Yes, and that is making us successful. We do not make any compromise. This is our method. If you like it, you can take it; if you don’t like it, you can reject it. We don’t mind. We are not interested in vox populi.