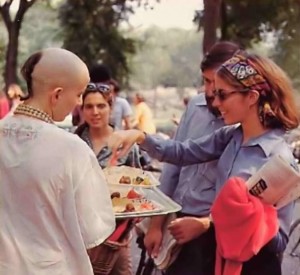 College students on two American campuses have discovered that they can add Krishna consciousness to their college life by studying the philosophy of Bhagavad-gita and eating prasada (vegetarian food offered to Krishna with devotion).

Every week at the University of Maryland, in College Park, sixty to ninety students attend a prasada-cooking class taught by Gabhira dasa, who is an authorized chaplain there. While deftly demonstrating how to whip up some curried rice or milk sweets, Gabhira expounds the philosophy of Krishna consciousness. He also teaches yoga meditation through the chanting of the Hare Krishna maha-mantra, and four days a week he distributes prasada and Krishna-conscious literature outside the Student Union. In addition, Gabhira has been a guest lecturer in history, American studies, anthropology, and health education courses.

Some of the other university-recognized chaplains (there are ten in all) take a dim view of Gabhira’s enthusiastic preaching. Rabbi Robert Saks, Hillel chaplain, disagrees with Gabhira’s idea that a chaplain’s role is to elevate the spiritual climate of the campus. “We’re not university chaplains,” Rabbi Saks said. “We’re here to serve our denominations as guests of the university… I’m scared of opening the door to proselytizing.”

Gabhira responds, “Krishna consciousness is non-sectarian: we want to elevate everyone’s consciousness. We’re basically teaching surrender to God… something like a spiritual peace corps. We’re showing that there is another way of life, a spiritual way.”

Meanwhile, Amarendra dasa has established a similar prasada-oriented program at the University of Florida, in Gainesville. But he had to win the right to hold his transcendental picnics on campus. Last April campus police arrested him and another devotee on three occasions and charged them with various violations of civil codes. The third incident drew a crowd of students, who cheered Amarendra and booed the police. The overwhelming majority of the students saw the incident as a clear-cut case of religious persecution, and they came out for the devotees in the school newspaper, the Alligator. Finally the local circuit court lifted its injunction banning the prasada distribution, and now Amarendra is back on campus to stay—dispensing rich, creamy Gauranga potatoes; buttery, flat-bread chapatis; fruit nectar; and generous helpings of Krishna-conscious philosophy.

Bhagavad-gita As It Is Breaks Records, Draws Praise

Through the efforts of His Divine Grace A.C. Bhaktivedanta Swami Prabhupada, the Bhagavad-gita is enjoying a resurgence of popularity in the West. In fact, each of the last three years has seen Srila Prabhupada’s disciples double their sales of his Bhagavad-gita As It Is. (To meet the great demand in 1977, Bhaktivedanta Book Trust Coordinator Rameswara Swami ordered one and one-half million copies—one of the largest single-title book orders ever placed!) What accounts for so much interest in Srila Prabhupada’s unique edition of the Gita? A few of the hundreds of scholarly testimonials tell the story:

Back in 1968, just after the first printing of Bhagavad-gita As It Is, the well-known clergyman and author Thomas Merton became one of the first to praise it. He wrote at that time, “The Gita can be seen as the main literary support for the great religious civilization of India, the oldest surviving culture in the world. The present translation and commentary is another manifestation of the permanent living importance of the Gita. Swami Bhaktivedanta brings to the West a salutary reminder that our highly activistic and one-sided culture is faced with a crisis that may end in self-destruction because it lacks the inner depth of an authentic metaphysical consciousness. Without such depth, our moral and political protestations are just so much verbiage.”

More recently, Dr. Davis Herron, Professor of Religion at Manhattan College, had this to say: “This definitive edition of the Gita is, due to its extensive purports, a storehouse of ancient Vedic wisdom, poetry, politics, and history. It should serve as a useful textbook for students and as a reference book for scholars of religion, as well as a general introduction to Vedic culture and practical philosophy for the layman. It is written for serious readers in general, not only from a scholar’s point of view, but from that of a life-long practitioner of the yoga of devotion. It is this sense of devotion that Srila Prabhupada has captured in his discussion of the verses, and which other commentators have failed to reveal.”