Back to Godhead > Krishna > Srila Prabhupada Speaks Out

Sin in the Name of Religion 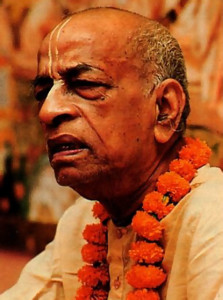 This is the conclusion of a conversation between His Divine Grace A.C. Bhaktivedanta Swami Prabhupada and a guest, Dr. Christian Hauser, a psychiatrist, that took place in Stockholm in September 1973.

Srila Prabhupada: Now, for one who is actually God conscious, where is the question of fighting or killing? Everyone is his brother. He knows God is the supreme father and we are all His sons. So one should know it for a fact—sarva-yonisu kaunteya murtayah sambhavanti yah/ tasam brahma mahad yonir aham bija-pradah pita [Bhagavad-gita 14.4]: “It should be understood that all species of life are made possible by birth in this material nature, and that I, the Lord, am the seed-giving father.” That is God consciousness.

And in the Christian Bible you have the specific commandment “Thou shalt not kill.” Last night, a gentleman asked me, “Thou shall not kill whom?” But there is no question of whom.

If you ask “Whom?” then at least “Thou shalt not kill thy father and thy mother.” And the cow is your mother, because she supplies you her milk. The cow supplies her milk, and so she is your mother. So how can you kill your mother?

Dr. Hauser: Well, some people drink other milk, too. Like goat’s milk. Is the goat a mother if you drink goat’s milk?

Srila Prabhupada: Yes, yes. But generally we drink cow’s milk. Some people may also have drunk goat’s milk at times, but nobody can say, “I’ve never drunk cow’s milk.” Nobody can say this, virtually anywhere in the world. Cows are created for that purpose—supplying us milk.

The Bhagavad-gita specifically instructs us, krsi-go-raksya: We human beings must protect the cow, our milk-giving mother. Go-raksya—“protect the cow.” Not go-hatya—“kill the cow.” This is most sinful.

If one is sinful, how can he say he is religious? Do you think a sinful man can be truly religious? Yet this is going on. In the name of religion, people are committing sins. I mean to say, this sinful killing of animals, especially cows, is the main cause of humanity’s current degradation.

Veda-nisidhya-karya kare veda-mukhya mane. As Lord Caitanya said, “People are acting against every religious principle, but advertising themselves, T am religious. I believe in religion.'” These nonsensical things are going on. A Christian is going against the basic Christian principle; nonetheless he is proud of being a Christian.

Today virtually all people are like that—even the Buddhists. In Japan I asked the head of a big printing firm, “You are a Buddhist, and Lord Buddha taught ahimsa, nonviolence—no flesh-eating. Do you eat meat?”

These things are going on. Actually, no religion will allow flesh-eating. In the Mohammedan and Jewish religions also it is allowed only after offering sacrifice—and never is the flesh to be taken when wholesome fruits, nuts, grains, and milk products are available. Only in the desert, or in other words, only as a last resort. Not from a slaughterhouse.

Dr. Hauser: Pardon? Not from what?

Srila Prabhupada: A slaughterhouse. But now people are regularly maintaining slaughterhouses. These grossly sinful activities are going on.

So in our movement we have got restrictions. Anyone who comes to be a serious student—he must give up the four main sinful activities: illicit sex, gambling, intoxication, and flesh-eating. Every one of our students. Every one. First of all, he must agree to this principle. Then I accept him as my student.

Dr. Hauser: Do you use leather?

Srila Prabhupada: Generally we avoid it, since at the present time people are obtaining it by sending the animals to the slaughterhouse.

Dr. Hauser: So you don’t allow it?

Srila Prabhupada: We don’t use it. For instance, none of our shoes are made of leather. Today there are so many substitutes, various plastics and other things. And every one of them is nice.

But leather, in itself, it is not prohibited, because you can get it after the animal has died a natural death. Yes. In India, those who are flesh-eaters wait until after a cow has died, and then they come and clear away the carcass. Then they eat the flesh and save the bones and horns and hooves and take off the skin to make shoes, and so forth. Since they get all their supplies for nothing, they can easily make their living.

The main idea is, sooner or later the animal will die. So let us wait for that time. Why should we kill a living animal?

Dr. Hauser: Do you use leather in your drums?

Srila Prabhupada: Yes, after the cow has died a natural death, that leather can be used.

Dr. Hauser: So you have leather drums?

Srila Prabhupada: Yes, that has been the way of making drums for thousands of years. But that leather is collected only after the animal has died a natural death. Not by killing.

Dr. Hauser: Thank you very much.