Back to Godhead > Krishna > Able to Cross Mountains 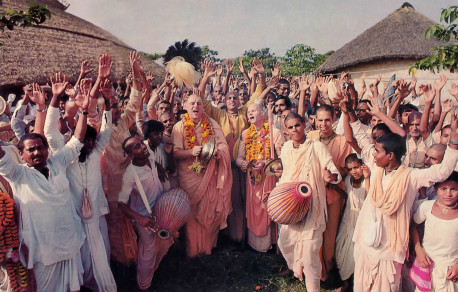 It’s six o’clock in the morning. Scores of Bengali pilgrims, bearing their clothes and blankets in bundles across their backs, hair still wet from their early-morning bath in the sacred Ganges, walk barefoot along the narrow road to the Mayapur Chandrodaya temple.

The temple is gorgeously decorated. In the center of the marble floor sits a sacrificial fireplace built of bricks and soft mud. Surrounding it are piles of luscious tropical fruits and flowers. Gaily painted clay pots bearing green coconuts and small festoons rest upon small mounds of fresh, unhusked grains. Painted rice flour motifs of conch shells, flowers, elephants, and sacred cows decorate the floor, and the Deities of Lord Caitanya and Sri Sri Radha-Krsna, resplendent in fabulously embroidered silk dresses, bear witness to all.

In the crowded temple room nearly six hundred devotees from around the world sit cross-legged on the cold floor, straining to hear Srila Jayapataka Swami shouting into the microphone to make himself heard above the voices of the excited pilgrims. 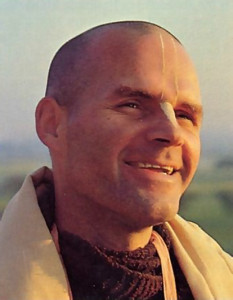 “Today we are going to award the order of sannyasa to Raghava Pandita Prabhu,” he explains. “Sannyasa is not an ordinary thing. It is the act of renouncing everything that is sacred to the materialists. To accept sannyasa not only means taking a vow of lifelong celibacy, but it is the act of totally absorbing oneself in Krsna consciousness, love of God.

“I find no one more appropriate to receive this title of sannyasa than Raghava Pandita. He came here to Mayapur in 1976, on Srila Prabhupada’s order. We were reluctant at first to engage him in any services that might be too physically demanding. But one day as I was speaking with him, I started to outline a plan for Nama Hatta programs that I’d been developing to revolutionize our preaching activities in India. Raghava took to it wholeheartedly, and in the following six years he traveled all over India, establishing more than one thousand centers.

“For those of you who don’t already know,” Jayapataka Swami shouts, “Raghava Pandita cannot even walk without the aid of crutches. But even if no transportation is available or if a particular place is very remote, he will happily walk ten or twelve miles, following jungle paths or hill trails or trudging through fields flooded by swollen rivers. To do these things, one must be detached from his bodily condition. Otherwise, how could he risk so much?

“Therefore,” Jayapataka Swami concludes, “I feel it is most appropriate to award him the title of Bhakti Raghava Swami.”

A priest ignites the sacred fire while chanting Sanskrit prayers. Flames leap up to lick the ceremonial spoon as the priest feeds them with clarified butter. The initiates confirm their vows, chanting prayers in response to the priest’s call, and the sacrifice is completed.

Later that afternoon I left the main temple and crossed the fields to the Mayapur boys’ school compound, where Bhakti Raghava Swami—with more than eight hundred fifty members from his various centers—was staying. I made my way to the smallest of the huts. There I found Bhakti Raghava Swami sitting in the cool stillness, his face and shoulders illuminated by the thin shafts of sunlight shining through the bamboo lattice window behind him.

Brushing off my congratulations, he eagerly began to speak about the Nama Hatta program. We walked outside together—he on his crutches—as he described how his party of devotees was systematically visiting every town and village in Bengal, Bihar, Orissa, and Bangladesh. When the party arrived in a town, they would invariably be invited to people’s homes. These people would be encouraged to develop their home into a temple and to preach door to door, distributing books, pamphlets, and prasadam (spiritual food). In this way, Bhakti Raghava Pandita had opened one thousand preaching centers, transforming the lives of thousands of people.

Yet when he spoke there was no hint of self-importance, but a sense of wonder at how the predictions of the great spiritual teachers were coming to pass. In the late nineteenth century Srila Bhaktivinoda Thakura had envisioned a splendid city populated by Vaisnavas right here in Sridhama Mayapur, a place where devotees from all over the world could gather together and chant Hare Krsna and glorify Lord Caitanya.

Bhakti Raghava Swami and I had been walking around together for almost one hour before it occurred to me how difficult it must be for him, walking with crutches on India’s rough roads. He had been lame in his right leg since his youth, but in March 1984 he lost the leg in a bomb blast when he tried to stop a band of armed robbers from stealing the worshipable Deities of the Mayapur Chandrodaya Mandir. I asked him if it caused him much inconvenience.

“Well, at least my leg doesn’t get in the way anymore,” he joked. “But seriously, I just try to use whatever energy the Lord has given me in His service. If I were to lament, I would not accomplish anything.”

I remembered visiting Bhakti Raghava Swami in a village hospital the day after the bombing incident. He had been lying on a small bed in a drab, unpainted four-by-eight-foot room. I’d brought him some fruits and flower garlands. Scores of local people who had heard about the incident crowded into the room, staring at him in disbelief.

“Should I tell them to leave?” I asked.

“No, it’s all right. I’m used to it,” he replied, weak from loss of blood. He proceeded to preach to the crowd in fluent Bengali. “Here is evidence that this temporary body is simply a source of misery. Don’t waste your lives trying to make a comfortable material situation. It can all be taken away within a moment—as you can see. Lord Caitanya Mahaprabhu appeared here in Bengal five hundred years ago to teach us to chant the maha-mantra: Hare Krsna, Hare Krsna, Krsna Krsna, Hare Hare/ Hare Rama, Hare Rama, Rama Rama, Hare Hare. This chanting is a call to the supreme soul, Krsna, to free us from material energy and accept us within His spiritual energy. So please take up this chanting.”

He fell silent, exhausted. The people were amazed that a person in such a painful condition could speak so eloquently. And this was a Westerner, speaking their language and telling them what they should have already known. Many bowed down to offer this saint their respects. My eyes filled with tears of pride and admiration.

Night was now closing in as we returned along the raised dirt road to the temple to attend an awards ceremony for the members of the Nama Hatta program. It was dark by the time we arrived at the temple, and decorative street lamps illuminated the roads. Thousands of pilgrims crowded into the temple grounds. The temple was already packed.

Raising his voice above the loud splash of the fountain, Bhakti Raghava Swami commented, “Lord Caitanya has given the most sublime and practical process for realizing our eternal spiritual identity, so that we can cease the illusion of falsely identifying with the temporary material body. We simply have to chant the holy names of Krsna. Srila Bhaktivinoda Thakura wrote in one of his famous songs, jiv krsna das e visvas, korle to’ ar duhkho nai. ‘O spirit soul, if you just realized that you are the eternal servant of Krsna, all your problems would be removed.’ The purpose of the Nama Hatta is to distribute this knowledge all over India, and all over the world.”

As he spoke, I saw intense compassion and determination in his eyes. I was reminded of a verse written by Krsnadasa Kaviraja Gosvami, the sixteenth-century biographer of Lord Caitanya: Even though a devotee may be lame, by keeping complete faith in Lord Caitanya, he will be able to cross mountains.