Back to Godhead > Krishna > Every Town and Village 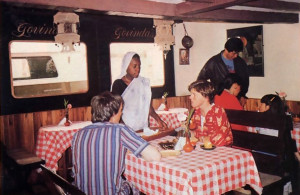 Cuenca, Ecuador—ISKCON devotees recently opened a restaurant here in this large and important tourist city. The purpose of the restaurant, known as Govinda’s, is to distribute prasadam (vegetarian food prepared for and offered to Lord Krsna). Distributiting prasadam is a powerful, transcendental means of spiritualizing society. Govinda’s is the city’s first purely vegetarian restaurant.

The devotees offer a standard menu of soy burgers, yogurt with fruit, milkshakes, vegetable curries, and sweets, as well as Brazilian, Chinese, and Italian cuisine.

Ecuadorian-born Mohana Vilasa dasa, who manages both the temple and the restaurant, says the restaurant draws many European and American tourists. They enjoy the fine food in a peaceful atmosphere and derive great spiritual benefit. 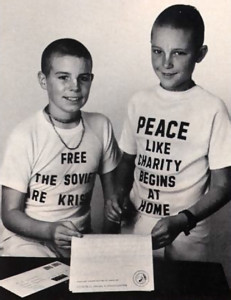 Prahlada dasa (left) and Ramana dasa with their letter to Soviet Premier Gorbachev.

Sydney, Australia—ISKCON devotees recently held a demonstration in front of the Russian Consulate here to draw attention to the plight of Hare Krsna devotees in the Soviet Union. The demonstrators included fifteen children from the Society’s school (gurukula) in Murwillumbah. New South Wales.

Australia’s leading daily newspaper, The Australian, ran an article by the nation’s most respected religious writer, James S. Murray. In the article, “Hare Krishnas Victims of Soviet Wrath,” Mr. Murray wrote, “The movement has brought KGB investigation and has led to interrogations, raids on meetings, physical violence, and eventual confinement of Krishna devotees in labor camps, psychiatric hospitals, and prisons. . . . The authenticated material supporting their claims [of persecution] is impressive.”

Mr. Murray went on to describe the cases of two Russian Hare Krsna devotees. Anatoli Pinyayev, Srila Prabhupada’s first Russian disciple, is now imprisoned in a special psychiatric hospital in Smolensk, where he is administered heavy, prolonged doses of the drug galoperidol, resulting in a deteriorating physical and mental condition. Olga Kiseleva, imprisoned for being a Hare Krsna devotee, gave birth to a daughter while in prison. Eleven months later the child was dead, owing to poor conditions of the prison. “She [Olga] remains separated from her husband and their two children for the offense of obeying her conscience and wanting to chant the holy names of God,” Mr. Murray writes.

Two gurukula boys, Prahlada and Ramana, wrote a letter to Soviet Premier Mikhail Gorbachev. Prahlada read the letter on prime-time national television news, capturing the hearts of millions of Australians. The letter appeared in five newspapers and in Australia’s People magazine, which interviewed Prahlada and Ramana.

Ramana (eleven) and Prahlada (twelve) asked Mr. Gorbachev to let them meet him in Moscow. “For a long time now,” the boys wrote, “we have wanted to visit your country, but we are a little scared about the things we have heard about Russia. We have heard some terrible things about what is happening to the parents of Hare Krsna children…. We don’t think you would like it if you were punished for a belief you have.” The boys told Mr. Gorbachev they would like to go to Russia and meet children, maybe even his own, to show there was no harm in the Hare Krsna life-style. The boys ended by expressing their concern about the nuclear disaster in Chernobyl.