Back to Godhead > Prabhupada > The Killing Civilization 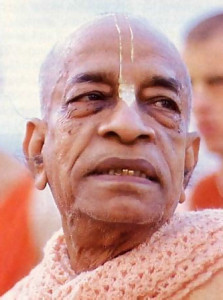 The following conversation between His Divine Grace A.C. Bhaktivedanta Swami Prabhupada and some of his disciples took place on May 30, 1974, during a morning walk in Rome.

Srila Prabhupada: If people do not want to approach the Lord’s devotees for spiritual enlightenment, what can be done? Just see this sparrow. Sex is always available to him. At any time sex is ready for him. The pigeons, so. Any time they want sex, sex is ready. Visayah khalu sarvatah syat: our only attachment for this material world is visaya, material sense gratification. The whole world over, people are fighting simply to gratify their bodily senses. “I must have nice eating, I must have nice sleeping, I must have very good sex, and I should be defended by a big bank balance, by military soldiers, by a powerful police force, by atomic weapons.” This is going on all over the world. Take defense: the rascal does not understand, “In spite of all these defensive measures, at the end of this lifetime I will have to change bodies and go on suffering. The same sense gratification will be available again, in a different way—and also the same suffering.”

Take the tiny ants. They are very fond of intoxication. Did you know that? As soon as they get information, “At the top of this skyscraper, there is a grain of sugar, they will go. [Laughter.] Wine is made from sugar, molasses. So sugar has the potency for intoxication, and if you keep a grain of sugar out in this room, soon there will be thousands of ants. An ants’ gold rush.

So study. Can you see any real difference between this so-called human civilization and the ant civilization, the dog civilization? No difference. It is only a matter of outward configuration.

Devotee: Yes. At the Sunday Feast we usually make sweetballs, and there’s some sugar water left over. And the next day we find many drowned ants, because they went so wild for the sugar that they jumped into it and killed themselves.

Srila Prabhupada: The Vedic literatures advise, “My dear human being, please note: You have attained this human form of life after many, many births. You had to go through the various forms of the aquatic life, 900,000 species; and you had to go through the various forms of birds and trees and plants, two million species. Consider how much time you have spent in this slow, painstaking evolution. Now you have come to the human form of life. And although it, too, is temporary, nonetheless you can achieve the highest perfection. You can evolve from life in this temporary world of misery to life in the eternal world of bliss. So before your next death in this world, become a very adept student of spiritual perfection—and achieve it.”

Devotee: But people will say, “Then what about my sense enjoyment?”

Srila Prabhupada: Don’t worry. Visayah khalu sarvatah syat: Your sense enjoyment will be available in any species of life. But this human form of life—you spend it for this higher purpose. Don’t waste it simply for sense enjoyment. This sense enjoyment you will get even if you become a cat or a dog. But in the cat’s or dog’s body, you have no opportunity to get out of this material existence.

Devotee: Ordinary people are accepting theories that promise them better enjoyment. People like to hear someone promising, “You’ll get better sense gratification.”

Srila Prabhupada: Politicians are promising, “You take this -ism or that -ism.” But nobody knows what is actually happiness. na te viduh svartha-gatim hi visnum durasaya ye bahir-artha-maninah: people are trying to be happy by sense enjoyment, the material body’s enjoyment. But durasaya: it is simply a hope that will never be fulfilled. Asaya means “hope,” and dur means “very difficult.” It is not going to happen.

Krsna consciousness is giving you everything in the right way, so that you can save your time, so that you do not waste your time dallying with material enjoyment and you can advance in spiritual consciousness. That is required. We don’t say, “Stop eating.” You eat. Take a little krsna-prasadam [vegetarian food offered to Krsna]. We don’t say, “Don’t sleep.” No, you sleep, but you must rise early in the morning and chant Hare Krsna. This is our philosophy. Surely, we give proper place to eating, sleeping, and sex. We don’t say, “No sex life.” Yes, you have sex. Get yourself a bona fide wife and live peacefully. And defense, also, we have. We never say, “You forego all these things.” No, this is not our philosophy. But at the same time, take only as much material enjoyment as you absolutely require, not more than that. The balance of your time—save it for spiritual advancement.

Unfortunately, today people are engaged simply for eating, sleeping, mating, and defending. They have no time for Krsna consciousness, no time for spiritual consciousness. This condemned civilization must be stopped. It is a killing civilization—a killing civilization. Human beings have the option of getting out of this material bondage—chewing the chewed again and again—but they are not being given the chance to exercise this special human option. Instead, they are being engaged more and more for the animal life of sense gratification. This killing civilization is sending human beings down into repeated births and deaths in the animal species. But by the process of Krsna consciousness-by renunciation and spiritual knowledge—many people have become purified and have gone back home, back to Godhead, the spiritual world.

All this information is available. But people are not educated. Therefore the Krsna consciousness movement is meant for educating them. That’s all.