Back to Godhead > ISKCON > News > Governments Aid “Food For Life” 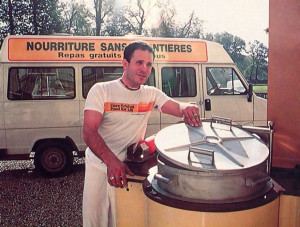 A new Hare Krsna Food for Life program in Paris is distributing one thousand meals daily, and a proposal was recently made to increase the distribution to three thousand meals to meet the high demand. More than six million French people live below the poverty level, and the government is anxious to remedy the situation. The devotees, therefore, receive free government surplus food and subsidized discounts on milk products, and a government volunteer association provides manpower when needed. 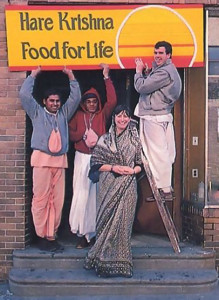 Elsewhere, renovation is almost complete on the new, three-story Hare Krsna Food for Life building in Philadelphia. The top two floors will become a fully-licensed shelter for the homeless, and a free lunch program will operate out of the storefront at ground level. Government officials have praised this program, and the shelter received public funds for emergency use last winter. Once the shelter is licensed, the Department of Welfare will refer homeless people and then reimburse the program under the purchase-of-service agreement it maintains with private shelters. The devotees plan to hold a grand opening and intend to invite Mayor Wilson Goode to a ribbon-cutting ceremony. Candrika-devi dasi, one of the program directors, met the mayor at a committee hearing of the state legislature, where she testified on homelessness in Philadelphia. 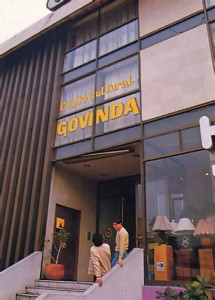 Mexico City—ISKCON recently opened a learning center near the National University of Mexico. The center offers morning and afternoon classes on the Bhagavad-gita, a nourishing lunch of krsna-prasadam (vegetarian food offered to Krsna), a cooking class, a class on Indian dance, and a weekly series of discourses on contemporary issues. In addition, a devotee on the staff gives guest lectures at the university. The new facility includes an auditorium, a video room, and a library containing transcendental literature. Vrajavasi dasa, the director, plans to translate and publish certain books that have not yet appeared in Spanish, such as Srila Prabhupada’s Teachings of Lord Caitanya.

Los Angeles –The Bhaktivedanta Book Trust (BBT) report for 1984 shows a continuing worldwide increase in the distribution of Srila Prabhupada’s transcendental books. Remittances by ISKCON temples to the BBT were double the largest total received in any year before Srila Prabhupada passed away in 1977. The greatest increases were in Norway, Denmark, Finland, Indonesia, Japan, and Malaysia. In overall distribution, ISKCON’s Southern European division topped all others.