Back to Godhead > Prabhupada > Sense Gratification Is for the Birds

Sense Gratification Is for the Birds

Sense Gratification Is for the Birds 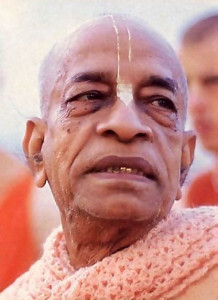 The following conversation between His Divine Grace A.C. Bhaktivedanta Swami Prabhupada and some devotees took place in May 1974 during a morning walk in Rome.

Srila Prabhupada: Adanta-gobhir visatam tamisram punah punas carvita-carvananam. Life after life, people are simply trying to enjoy their senses. Life after life, the same thing over and over again. The same eating, the same sleeping, the same sexual intercourse, and the same defending, either as man or as dog. Punah punas carvita-carvananam: again and again, chewing the chewed. Whether you become a demigod or a dog, in the material world everyone is given the facilities for these four things: eating, sleeping, having sexual intercourse, and defending.

Actually, if some danger were to come now, we humans might be victims, but a bird would immediately fly away. So the bird has better facility for defense. Is it not? Suppose all of a sudden a car came directly at us. We would be killed. We could not do anything, but even the smallest bird—”Hut! I’m leaving!” He can do that. Is it not? So his defensive measures are better than ours.

Similarly, if we wanted to have sex, we would have to arrange for that. Find out some mate and a suitable time and place. But the female bird is always around the male bird, at any time. Take the sparrows, or the pigeons. Have you seen it? Immediately they are ready for sex. And what does the bird do about eating? “Oh, there is some fruit.” Immediately the bird can eat. And sleeping is also easy and convenient.

So these facilities—don’t think that they are available only in your skyscrapers. They are available for the birds and the beasts. It is not that unless you have got a very nice apartment in the skyscraper, you cannot have all these facilities of eating, sleeping, defending, and having sex, You can have them in any material body, in any species: Visayah khalu sarvatah syat. Visayah means the facilities for material sense enjoyment. Our process is visaya chadiya se rase majiya. One has to give up this unsatisfying material enjoyment and relish transcendental bliss, the taste of spiritual enjoyment. It is enjoyment on a different platform.

But today people are so befooled by the bodily concept of life that their only enjoyment is this material, so-called enjoyment.

So the scriptures advise, “This temporary, inferior enjoyment is available in any form of material life-either as man or as bird or as beast. Why are you repeatedly going after this same unsatisfying enjoyment in all these different species of life? Punah punas carvita-carvananam: In all these different forms, again and again, you are doing the same stupid, unsatisfying thing.”

But matir na krsne parato svato va: those who are befooled by material sensual enjoyment cannot become Krsna conscious, by their own endeavor or even by instruction from a spiritual master. And mitho ‘bhipadyeta: these foolish people may hold many conferences and meetings to inquire, “What are the problems of life?”—but still, they cannot take to the process of Krsna consciousness.

Why? Grha-vratanam: as long as they have got this determination—”We shall be happy in this material world”—they cannot take to Krsna consciousness. Grha means “home” and also “body.” Those who are trying to be happy within this material body—they cannot take to Krsna consciousness, because adanta-gobhih: their senses are so uncontrolled. Therefore these people must repeatedly undergo the ordeal of chewing the chewed. Again and again, the same sensual enjoyment: eating, sleeping, mating, and defending.

Devotee: So our task is to convince people that they can’t be happy in the material world?

Srila Prabhupada: Yes. And they have already got very convincing experience. Daily they are founding so many parties, manufacturing so many means and plans and this and that, but still they are not happy. And yet they are such great fools that in spite of being repeatedly baffled, still, they are chewing what they have already chewed—the same thing all over again, in somewhat different forms.

What is the difference between the communists and capitalists? After all, both groups are simply looking after how they can make things into a better arrangement for their own sensual enjoyment. The two groups are fighting, but everyone’s aim is grha-vratanam: “We shall remain within this material world and be happy here.”

Devotee: The idea is, if we can get enough food and sex, we will be happy.

Srila Prabhupada: That’s all. And then people become impotent. And they beg the doctor, “Give me some sex medicine.” You see? Punah punas carvita-carvananam. Chewing the same old tired thing. And when they feel disgusted with sex at home: “Let us go to the prostitute. Let us go to the naked dance.” They have no other ideas. So this class of men cannot take to Krsna consciousness. First of all, one must be in knowledge—”I am not anything of this material world. I am spirit soul. My happiness is in the spiritual world.” Then he is a real human being and he can make spiritual advancement. So the next question is, “How can one become interested in the spirit soul or Krsna consciousness?” How? This is the question. Animals—and people like animals—cannot become interested.

The Srimad-Bhagavatam [7.5.32] says, “The consciousness of these rascals and fools cannot be turned toward the lotus feet of Lord Sri Krsna, who acts wonderfully, until they touch their heads to the lotus feet of a devotee of the Lord who is niskincana, who has nothing to gain in this material world and is simply interested in Krsna.”

(continued in next issue)