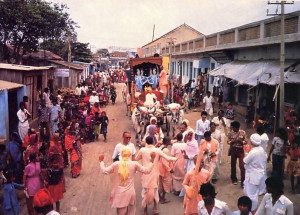 The pada-yatra procession is rolling through more than three hundred villages like the one above, reminding South Indians of Lord Caitanya’s travels in these same places some twenty generations ago.

Trivandrum, Kerala—Recently, a group of ISKCON pilgrims arrived here, seven months after leaving Dvaraka, a holy town on India’s northwest coast. They are taking part in an eighteen-month, four-thousand-mile pada-yatra, or “walking festival,” Laksmi, a gaily painted elephant, leads the procession of chanters, who number anywhere from about thirty to one hundred. The procession is followed by three bullock carts and a camel cart; The no-frills caravan is reminiscent of a time five centuries ago, when Lord Caitanya journeyed through the towns and villages of South India.

ISKCON inaugurated the pada-yatra to celebrate the five-hundredth anniversary of the appearance of Lord Caitanya, who is Krsna Himself appearing in the role of His own devotee to teach the congregational chanting of the Hare Krsna mantra as the prime means of God realization in this age. Lord Caitanya predicted that the congregational chanting would spread to every town and village in the world, and by traveling on foot through South India, He demonstrated how this prediction could be fulfilled. ISKCON pilgrims, walking through ten major cities, fifty-five towns, and more than three hundred villages formerly visited by Lord Caitanya, are following in the Lord’s footsteps. The pilgrimage will culminate in Mayapur, West Bengal, the birthplace of Lord Caitanya, on His five-hundredth anniversary next spring.

When the pada-yatra entered Sanand, Gujarat, the people were overjoyed because the town had been blessed for five days in 1976 by the presence of ISKCON’s founder and spiritual master, His Divine Grace A.C. Bhaktivedanta Swami Prabhupada. His impact on the townspeople had been so great that upon seeing the murti (statue) of Srila Prabhupada, they became emotional. By taking Srila Prabhupada’s murti on the pada-yatra, the devotees are executing his unfulfilled desire, expressed in his last days, to travel all over India. The principal cart is constructed as an altar, with Srila Prabhupada’s murti seated before Deities of Lord Caitanya and Lord Nityananda.

Several million people are having their first contact with ISKCON as a result of this pada-yatra. They are seeing the Deities, receiving food that has been offered to Krsna, obtaining transcendental literature, joining the pilgrimage briefly, and attending the festivals ISKCON holds nightly.

An advance party arranges these evening festivals in a new location each day, which the pada-yatra reaches by walking approximately eleven miles, beginning at sunrise to beat the heat. At one evening festival in the remote district of Dang, the only district in India without a movie theater, villagers saw the first movie of their lives: a film biography of Srila Prabhupada. Many people are amazed to learn that Lord Caitanya visited their town or village, and they are impressed to see Western devotees of Krsna marching in a four-thousand mile pilgrimage. The local people chant and dance enthusiastically and even take vows to chant the Hare Krsna mantra on beads every day.

Mayors, municipal officers, and religious leaders are welcoming the pada-yatra. In Palej, Gujarat, the Moslem mayor invited the pada-yatra pilgrims to chant Hare Krsna in the mosque. The devotees gladly complied and presented the mayor with a copy of Srila Prabhupada’s Bhagavad-gita As It Is.

Last year in New Delhi, Dr. Karan Singh, chairman of India’s Sri Caitanya Five-Hundredth Anniversary Committee, after presenting a list of proposed celebration programs, admitted that ISKCON’s pada-yatra was the most ambitious program of all.

London—To improve community relations and to promote understanding of the Hare Krsna movement here, student policemen of the Royal Police Academy in certain districts are required to spend an afternoon at local ISKCON temples after completing their training.

The tour at Bhaktivedanta Manor begins with a walk around the grounds and a visit to the gurukula, an elementary school. In-side the Manor, the trainees tour Srila Prabhupada’s quarters (now a museum), and they hear about the Vedic literature and the Vedic culture that Srila Prabhupada introduced to the West.

After the tour, the guests view a film entitled The World of Hare Krishna. A delicious dinner of krsna-prasadam (vegetarian food offered to Krsna) tops off the afternoon visit.

The pada-yatra procession is rolling through more than three hundred villages like the one above, reminding South Indians of Lord Caitanya’s travels in these same places some twenty generations ago.