Back to Godhead > Prabhupada > Advice to the United Nations

Advice to the United Nations

Advice to the United Nations 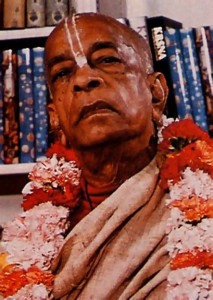 The following is a continuation of a conversation that took place between His Divine Grace A.C. Bhaktivedanta Swami Prabhupada and Mr. C. Hennis of the U.N. ‘s International Labor Organization on May 31, 1974, in Geneva.

Srila Prabhupada: The social body should have a class of men who act as the brain and guide everyone so that everyone can become happy. That is the purpose of our movement.

Mr. Hennis: That’s a valid point, because it has always been affirmed in every society that there is a need for a priestly class or a class of philosophical leaders.

Srila Prabhupada: But now the so-called priestly class are amending the Biblical injunctions according to their whims. For instance, the Bible enjoins, “Thou shalt not kill.” But the priestly class is like the other classes—sanctioning slaughterhouses. So how can they guide?

Mr. Hennis: But the animal world is entirely composed of beings who eat one another. I suppose that the justification that people have for maintaining slaughterhouses is that it is just a cleaner way of killing than for a lion to jump on the back of an antelope.

Srila Prabhupada: But as a human being you should have discrimination. You should be guided by your brain, and society should be guided by the “brain class” of priestly, thoughtful men. Nature has given human beings the fruits, the vegetables, the grains, the milk, which all have great nutritional value, and human beings should be satisfied with these wholesome foods. Why should they maintain slaughterhouses? And how can they think they will be happy by being sinful, by not following God’s commandments? This means society has no brain.

Srila Prabhupada: Your organization may not be directly concerned. But if human society is brainless, then no matter how much you may try to organize, society can never become happy. That is my point.

Mr. Hennis: My organization is concerned with taking away the obstacles that prevent people from attaining a proper brain. One of the obstacles is just plain poverty.

Srila Prabhupada: No. The main thing is, society must learn to discriminate between pious and sinful activities. Human beings must engage in pious activities, not sinful activities. Otherwise, they have no brain. They are no better than animals. And from the moral point of view, do you like sending your mother to the slaughterhouse? You are drinking the milk of the cow—so she is your mother—and after that you are sending her to the slaughterhouse. That is why we ask. Where is society’s brain?

Mr. Hennis: Of course, when you speak of the distinctions that are made between pious activities and sinful activities—

Srila Prabhupada: Today practically no one is making this distinction. We are making it, and we have introduced these ideas by establishing farm communities and protecting our cows. And our cows are winning awards for giving the most milk, because they are so jubilant. They know, “These people will not kill me.” They know it, so they are very happy. Nor do we kill their calves. At other farms, soon after the cow gives birth to a calf, they pull her calf away for slaughter. You see? This means society has no brain. You may create hundreds of organizations, but society will never be happy. That is the verdict.

Mr. Hennis: Well, we can’t be accused of engaging in sinful activities when we don’t think what we are doing is sinful.

Srila Prabhupada [Laughing]: Oh? You don’t think you can be accused of breaking the state law—just because you don’t know what the state law is? The point is, if your priestly class have no knowledge of what is sinful, they may instruct you, “Don’t do anything sinful”—but what good is that? You must have a priestly class who know what is sinful, so that they can teach you. And then you must give your sinful activities up. When these young people came to me, I told them, “Flesh-eating, illicit sex, gambling, and intoxication—these things are sinful. You must give them up.” If we do not give up these sinful activities, nature punishes us. So we must know the laws of nature, what nature wants. At the very least, nature wants that we human beings stop our sinful activities. If we do not, then we must be punished.

Mr. Hennis: We are just trying to give people a fair share of the material things of life: proper wages, decent homes, decent opportunities for leisure.

Srila Prabhupada: That is all right, but people must know what is sinful and what is pious.

Srila Prabhupada: As an international organization for peace and well-being, the United Nations should maintain a class of men who can act as society’s brain. Then everything will be all right. Simply legs and hands working without any direction, without any brain—that is not very good. The United Nations was organized for the total benefit of human society, but it has no department that can actually be called the brain organization.